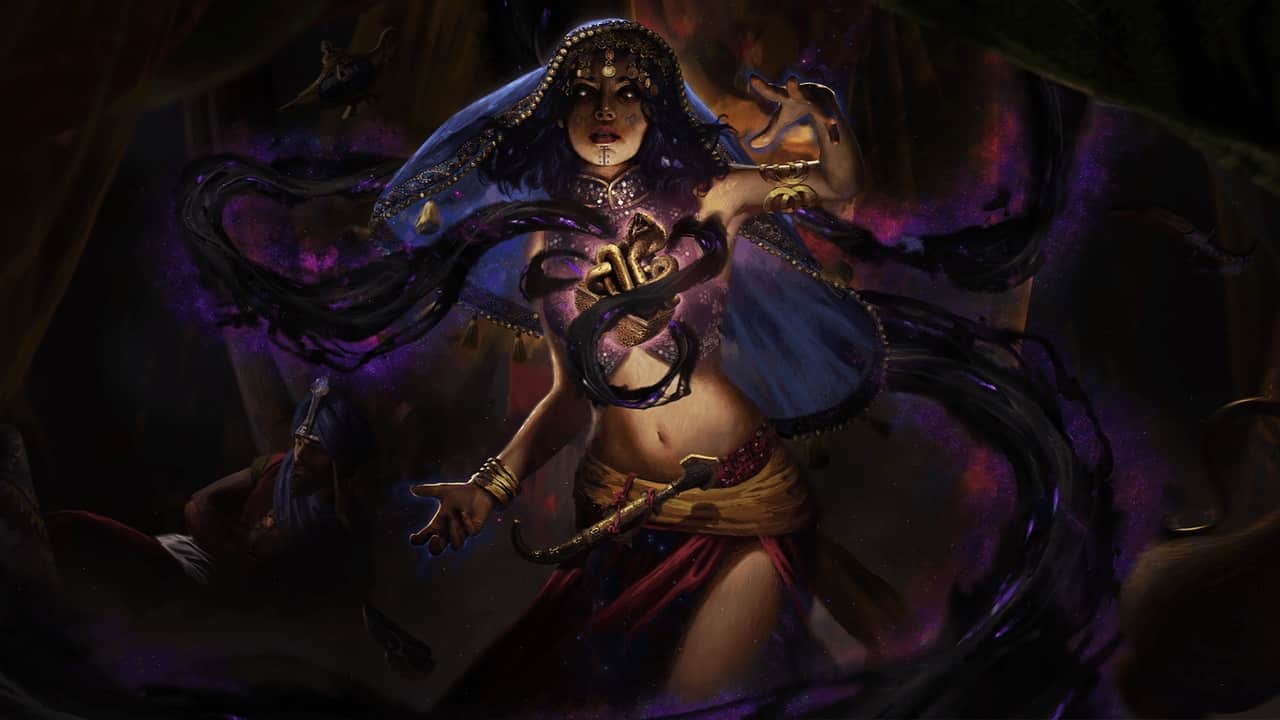 In Part 3 of our Merchants of Ofir card review, Gravesh will go over all the new additions to Nilfgaard and Syndicate. If you want to ask any questions, you can join our Discord server: https://discord.gg/uSUSJZr

Aristocrats and Vampires have infiltrated the ranks of the Empire! Nilfgaard's expansion theme is focused around fleshing out the existing archetypes like Poison and Lock, while also adding powerful and versatile tools to the faction.

Collar has some potential if only for it's ability to immediately apply a Status (Lock) that synergizes with some of the newly added cards like Hunting Pack and Thirsty Dame. In reality, Nilfgaard decks as a whole are built around controlling the opponent's board and so 5 flat points from Tactical Advantage or Magic Lamp are more valuable. 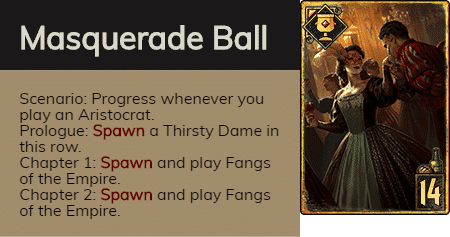 Focused around the addition of Aristocrats, Masquerade Ball in itself is a package that plays for 14 points and removes a target of your choice with double Poison. As with all Scenarios, it's weak to artifact removal. While Masquerade won't be included in a wide array of decks, there are some tricks Nilfgaard can use to make it playable. The cheekiest way to get value from the Scenario is with Strategic Withdrawal. You can play Masquerade Ball and instantly trigger its full effect by using Strategic Withdrawal and playing Roderick into any Aristocrat.

The Nilfgaardian Army knife of the expansion. Does the opponent have any units with Vitality, Shield or a Defender? Do they have any unit with the Doomed tag like Shupe: Knight or Savolla's Frightener? Vincent has your back. Destroying any unit with a Status is an incredibly good effect and he also comes with a 6 point body. Easily one of the strongest cards in the set, synergizing with your Poison and Lock cards as well. 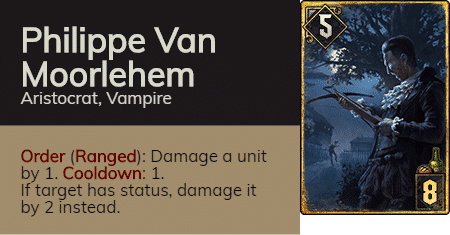 Philippe is the Nilfgaardian version of a 5 point engine for 8 provisions such as Pavko Gale or Sigvald. Sadly, he's even more lackluster than his counterparts, as dealing extra damage to a unit with a Status is simply detrimental in most cases.

Cupbearer is another great addition to the ranks of Nilfgaard. This fancy gourment has a multitude of offensive and defensive applications and is also an engine himself with the Assimilate tag. You can comfortably include Cupbearer in the majority of Nilfgaard decks.

While this engine can grow very fast with all the Statuses that Nilfgaard is able to apply (especially with the buffed Rot Tosser) it's also very slow and dependent on your hand. Hitting the battlefield with only 4 power makes Thirsty Dame vulnerable to most removal cards.

Conditional Impera Brigade for 1 less provision. Since Statuses are very common and also easy to apply, Hunting Pack might replace Brigade as the thinning tool of choice. Note that you can combo this card with Artorius Vigo just like with Brigade, allowing you to thin 2 cards while putting 10 points and a unit with Assimilate on the board.

Versatility is clearly the theme of NG cards from this expansion. A base value of 5 points with the ability to apply different statuses. Hunter can always Lock the key threat, and enable other cards like Hunting Pack and Vincent. While Hunter might not be an auto-include, it's a card that's worth a consideration for basically every deck.

Not terrible, but also not very good. Since most Statuses are either not lasting for long or are something you want to capitalize on right away, Servant seems to be out of place for any deck focused around Statues.

The Gangs of Novigrad got a bunch of new tools that don't fit into existing archetypes, but instead aim to facilitate some new ones. Unfortunately, the support for these archetypes seems to be a bit underdeveloped and as such, this expansion leaves a lot to be desired.

Eye of the Tiger is a solid alternative to Tactical Advantage. It grants uninteractive, freely distributable Coins that you can use to instantly trigger Hoard abilities on cards like Passiflora Peaches, amp up your Philippa or convert them into damage with good old Ewald Borsodi. While Tactical Advantage is the better Stratagem, Tiger's Eye is worth your consideration when building a Syndicate deck, especially if it's a Hoard-oriented one with some of the new cards. 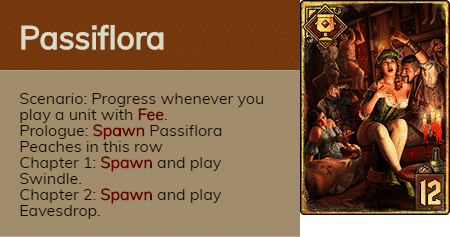 Passiflora is likely the worst Scenario we got with Merchants of Ofir. Weak to artifact removal and its conditions are hard to meet without screwing up your game plan. The pay-off is hardly worth it. Between finding suitable Fee cards to play at the right moment, holding onto the required amount of Coins for Hoard value on Passiflora Peaches, not overfilling your Bank with Swindle/Eavesdrop and actually using the coins they generate efficiently, Passiflora asks for far too much to ever get consistent value. 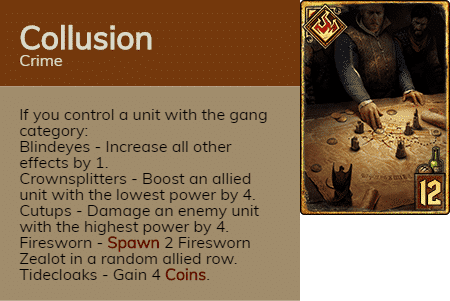 It's very hard to evaluate this card. If you can meet all of its conditions, you get rewarded with 21 points for 12 provisions. Collusion is a Crime, making it tutorable with Ferko and procing your Intimidate engines, which is insane on paper. However, having 1 of each Gang member on the board is difficult, which makes this card too conditional to become a staple just yet. You have to build your entire deck around it and you need to have enough time to establish all of the Gang tags. The biggest problem is that there aren't enough valuable cards with the respective Gang tags. With that said, Collusion has immense potential that might be uncovered by a great deckbuilder or a future expansion.

Another Syndicate card that has a great ceiling (11 for 7) but is awkward to use in practice. Not only do you have to play this card early into the round and protect it, but you also have to make sure to be at 3 or fewer Coins when his ability triggers. Aside from being vulnerable to removal, he's prone to being Seized by Nilfgaard or Philippa for disgusting value. Ludovicus might find his way into decks that focus on Hoard.

Speaking of conditional value, Saul is another hot candidate. It almost seems like he could somehow fit into the faction and be good, but he sadly falls victim to the ebb and flow of Coin generation and spending. Compared to Dire Mutated Hound, Saul looks as weak of a spin-off as The Cleveland Show, so you better not call him. Similarly to Ludovicus, Saul might find his way into some decks that are yet to be discovered.

In case you were beginning to wonder, then yes, Syndicate actually got a good card in the expansion. Bloody Good Friends are a 5 for 5 spender that transfers Coins into Bleeding with a potential upside of damaging boosted units, disabling their Inspired ability. Aside from being a solid spender, Bloody Good Friends are also the only unit with 2 Gang tags, making it a synergy piece for cards like Sigi and Collusion.

An engine that hits the board with 5 points and can keep on growing is nothing to scoff at, especially in a faction that's known for having issues with proactivity. Meeting the Hoard condition is easy since most Crimes grant 4-5 Coins. In Round 1, Tiger's Eye can activate Peaches right away. The problem with a Hoard condition is that you can't spend your Coins when you want to because then you would lose out on the Hoard value.

There isn't much to say about this card. Payroll Specialist is thoroughly underwhelming. I suppose that Syndicate finally has a Movement card. Intimidate and Profit are nice, but there are much better options.

A cheap spender with the base value of 5 for 4. Compared to Sea Jackal, it has a 1 point higher floor, but can't generate any additional value. The biggest upside to Street Urchins is the upfront Profit of 3 Coins that can be invested elsewhere, or used for carry-over. All in all, if you're looking for a 4 provision spender, Sea Jackal does the job better and if you want cheap Coin generation, you would rather play any of the Bronze crimes.