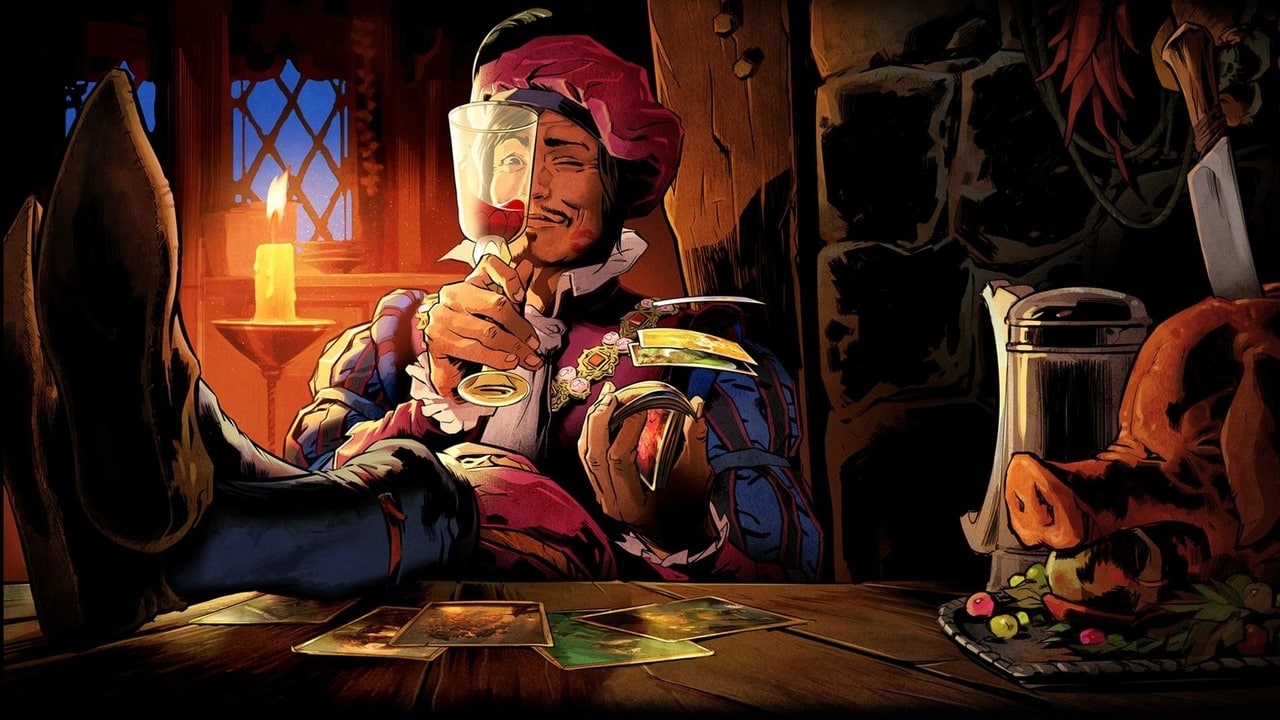 Hello everyone, Atrsharpe here to introduce you to a rather important aspect of Gwent - its Ranked mode. I will cover the absolute basics of Ranked and go over everything from Rank 30 to Rank 0 (Pro Rank). If you are a more advanced reader, familiar with Gwent's Ranking system, please check out my other article focusing on The climb to Pro Rank. But for now, let's start with the basics! If you have any questions, you can join our Discord server and reach out to me. 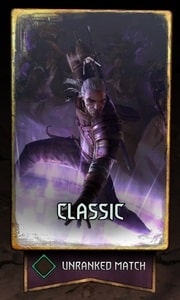 In order to actually play the Ranked mode, you have to make sure that the tick box underneath the "Classic" mode isn't ticked before entering the matchmaking process. There is nothing worse than winning a couple of games before realizing that you weren't even playing Ranked.

Gwent, like many other competitive card games, follows a ladder structure with its Ranked system. The structure is easy to comprehend, each Rank represents a rung on a ladder. The bottom rung is Rank 30, which is the Rank newcomers start on. The highest rung is Rank 0, also known as Pro Rank (we will get to that later). The aim of the ladder structure is to climb the rungs so you can get to the very top of the ladder, which is accomplished by winning games and completing the mosaic pieces.

In a Ranked game, as far as the rules and the format of the game are concerned, nothing is different from an Unranked (Casual) match. The major difference is that you will be playing with opponents of similar skill to yours (based on current Rank).

The Ranked ladder we talked about earlier is made up of 30 rungs, going from Rank 30 to Rank 1. Once you complete the last mosaic (Rank 1), you will be promoted to Pro Rank (Rank 0). To show your current progression, you are rewarded with a new mosaic whenever you rank up. Each mosaic is made of 5 individual pieces and comes together to form a character known from the Witcher universe. You gain a piece of the mosaic after winning a Ranked match, but when you complete the whole mosaic, you won't move onto the next Rank just yet. You will have to win one more game after the mosaic is full and then you will finally progress forward.

As an added bonus, when you move onto the next Rank, you get to permanently keep the mosaic from the previous one and can also use it as your avatar. Additionally, you can't "derank," meaning lose your current mosaic and go back to the previous Rank. That's it for the basics of Ranked progression, nothing complicated. Now let's dive into a little more detail.

There are a few changes between the Ranks, most notably in the amount of mosaic pieces you gain or lose. The system makes it more challenging for the higher Ranks and slightly easier in the lower Ranks.

If you haven't reached Pro Rank yet, it's probably worth skipping this section. The main difference between the regular and Pro Rank is that MMR suddenly becomes very relevant. If you aren't aware of what MMR is, I'll try to explain it to the best of my ability. Let's start with fMMR - your faction Matchmaking Rating represented by a number for every faction.

Your overall MMR, which is the number you can see next to your position on Pro Rank, is the total number of your 4 best performing factions. When you enter Pro Rank, all of your factions will be reset to 2400 fMMR, regardless of how many games you have played before.

The peak fMMR with a faction can't decrease and is added to your overall MMR. Your current fMMR can change, going up and down for about 7 points with each win or lose. In order to keep increasing your total MMR and climb the Leaderboard, you have to improve your peaks.

Lastly, if you want to have a faction contribute 100% of its fMMR, you will need to have played at least 25 games with the specific faction, also known as the placement matches. So in order to get the most from your total MMR, you will have to play 25 matches with 4 different factions. 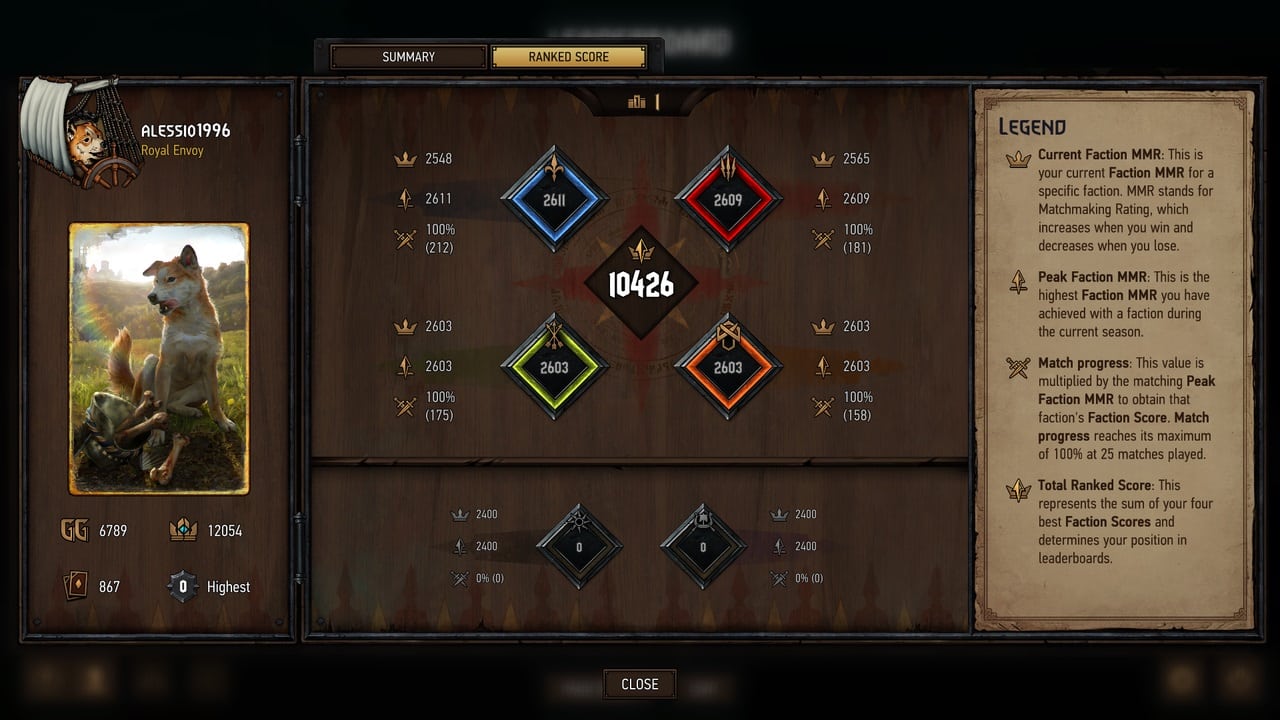 Above, you can see the current (Season 18) profile of one of our competitive players, Alessio1996. His overall MMR is 10426, which is the combination of his 4 highest peak fMMR's with Northern Realms, Monsters, Scoia'tael and Syndicate. Next to each of the factions, you can see his current fMMR.

Despite Northern Realms being his best faction at 2611, he is 63 fMMR off-peak. This means that he has to climb 63 fMMR before having a chance to improve his peak. On the other hand, his Scoia'tael and Syndicate are on peak. Winning a game with either faction would result in increasing his overall MMR and further improving the odds of maintaining his #1 spot on the Leaderboard and winning the current season.

Your overall MMR is important because it determines your position on the Pro Rank Leaderboard, showing the best Gwent players in the world and how they compare to one another. Pro Rank feels more competitive than the regular Rank, since you will be up against players who no longer compete for the chance to move up a Rank, but instead aim to increase their position on the Leaderboard for the end of the season.

After the recent changes, you can't see the Ranked Score or specific fMMR of other players in Pro Rank, but you can still see their overall MMR and their best performing faction on the Leaderboard.

End of the Season

A Ranked season in Gwent generally lasts for one month, give or take a couple of days. At the end of each season, a few things take place. First of all, CDPR rewards you for the progress you made with a good amount of Reward Points (RP).

Certain areas of your progression will be reset at the end of each season, most notably the MMR. This applies to all Gwent players, regardless of your Rank. Everything will be back to 0, and you will have to replay your 25 games with every faction. Your Rank will also reset, or rather decay, depending on where you have finished the season.

If you have made it to the Top 200 on the Pro Rank Leaderboard, you will get certain benefits, depending on your exact position on the Leaderboard. Crown points add up over a certain number of seasons and will assist CDPR with choosing players to invite to events like Gwent Open, Challenger and Masters. 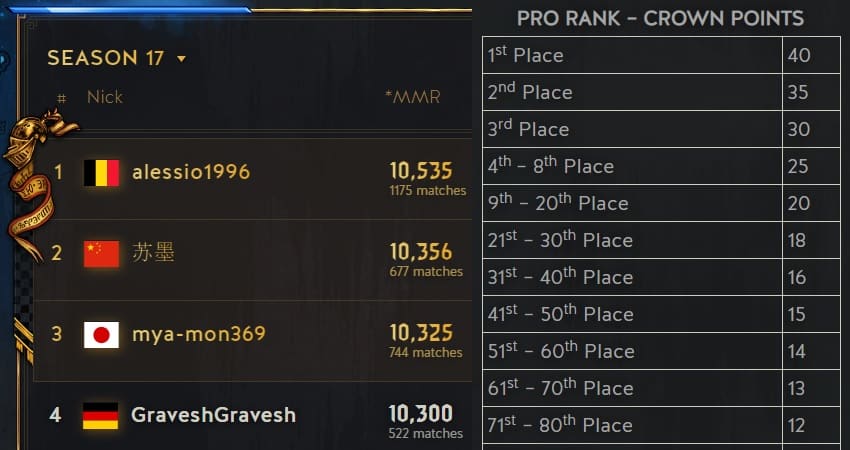 Players receive a number of Crown points equal to where they finished within the Top 200. In this example, TLG's very own Alessio1996 has received 40 CP for winning Season 17. All in all, the higher you climb on the ladder, the higher your chance to compete in official tournaments.

The 14 players who failed to qualify in the Top 16 qualifier can try again in the Top 64 qualifier, which is held a week later. This one goes across two days - Day 1 is a Swiss format with 6 rounds, the best 8 players advance to Day 2, which is again held in a double-elimination format.

This adds a greater incentive to climb up the Pro Rank Leaderboard by the end of the season. It makes the Top 64 spots more competitive than ever, as everyone wants a shot at being able to compete in a CDPR event for real money.

I thought I would include a small section about my personal experience with Ranked and some advice I can offer. I started playing Gwent with the release of Syndicate, which means that I have played through 4 seasons of Gwent. However, I was able to climb to Pro Rank in my first season and then made it to the Top 500 by the end of my second season. I know how daunting and impossible it can feel when trying to climb, which is why I have a few pointers.

The first is to simply keep playing Ranked matches as long as you're having fun, because there is no harm in it. You can't lose your current Rank, meaning that in the worst case you will lose a few mosaic pieces and that's it. The more you play, the more you will improve with the specific deck and thus increase your chance of climbing.

My second tip is to consider taking a break once you've lost a few matches in a row. It's normal to have a bad session of Gwent and it happens to pro players as well. Take a step back and don't play when tilted or overly frustrated. It happens.

And finally, experiment with factions. Climbing through the lower Ranks is the best chance you get to play random decks and try different things, because you really have nothing to lose. Once you reach Rank 7, or let's say Rank 5, you can start seriously pushing for Pro Rank. If you struggle with your climb to Pro Rank, I have another article with a few helpful tips.

With that, you know the basics of Gwent's Ranked system. It isn't too complicated, you just have to try and get your head around the whole total MMR and faction MMR stuff, but that will come with time. You can make it to pro Rank playing just one faction, so feel free to practice it until you get it under your belt. There are a few good sources with competitive decks, for example our Meta Report which lists the best decks available for every season. I hope you found this article useful and until next time, enjoy the climb! 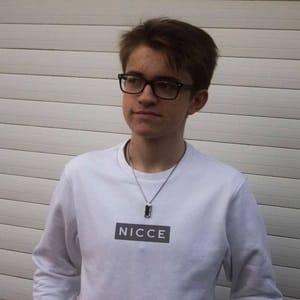