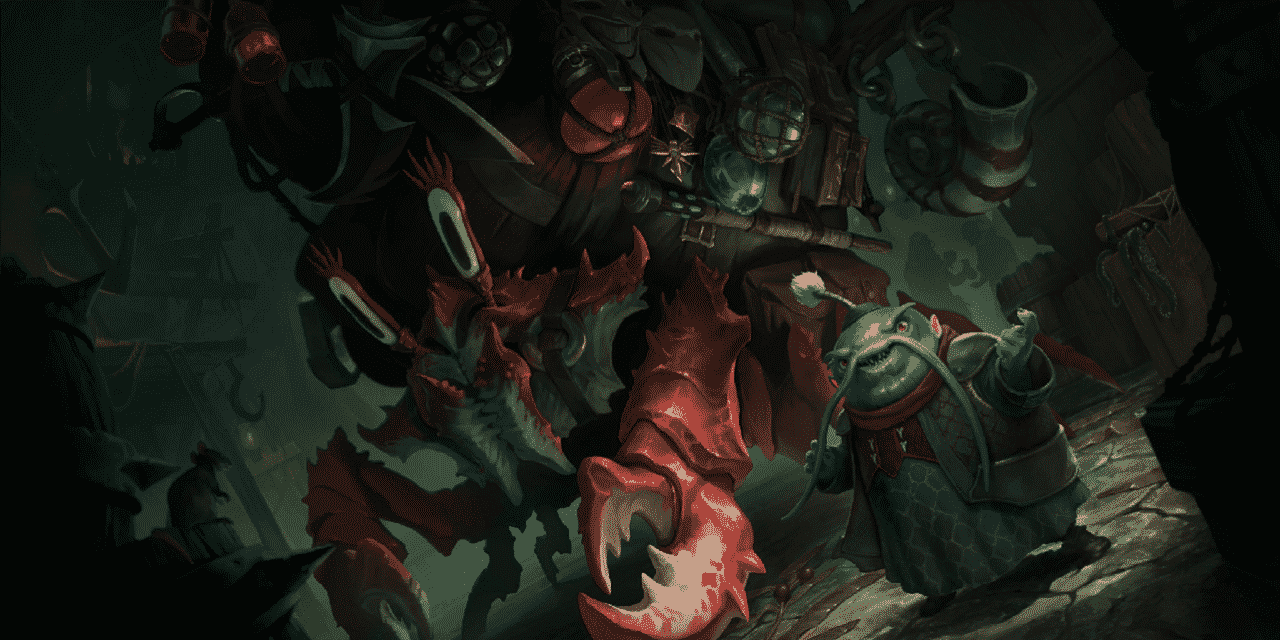 Hello, Crixuz here with another skill from the Toolbox!

Google’s dictionary defines a bluff as “an attempt to deceive someone into believing that one can or is going to do something.” We first have to ask ourselves how it is even possible to bluff our opponents in a video game where players cannot see each other. Briefly, here are some methods: 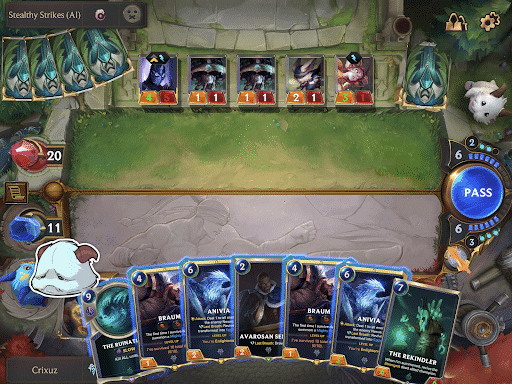 A simple example of bluffing is misdirection with emotes. Using the Sad Poro emote to encourage my opponent to continue overextending and thus maximize my Ruination’s value. Disclaimer: This only works in very low elo. Do not rely on it!

I’ve made it my mission to catalog, discover, or invent these methods. The list may expand in the future, but for today, we will concentrate on 1. Attempting to cast a spell and then withdrawing the spell.

In a previous guide, I described the mechanics of spells in Legends of Runeterra. I highly recommend that you read it before you continue. Specifically, I discussed that slow and fast spells can be ”recalled”. This means that you can attempt to cast a spell and then later change your mind and not cast them. This is to be distinguished from burst spells which are immediately cast once you pull them out of your hand.

When the player attempts to cast a slow or fast spell but hasn’t actually committed to casting it, the “unknown spell” symbol will be available for the opposing player to see. 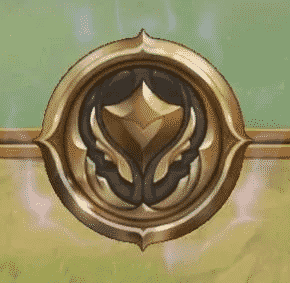 Bluffing with slow and fast spells

The mechanic of spell casting in Runeterra is a double-edged sword. If you are not a careful player and you tried casting Atrocity on turn 8 against an Ionia player, before suddenly remembering they may be holding onto a Deny, you inadvertently signaled to them that they must keep four mana up to Deny your Atrocity on They Who Endure.

To best teach this point, I’ll be using the example of a game that I played some time back. I was playing a Gangplank Rekindler deck (SI and Bilgewater) against Fizz TF. 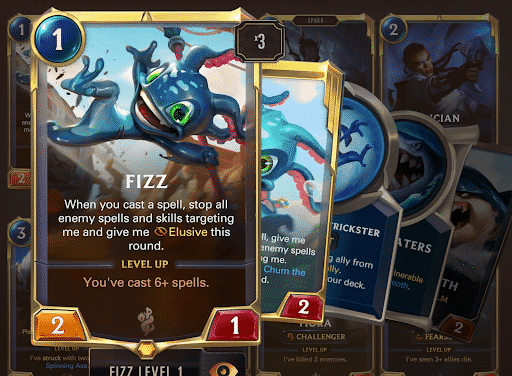 For any control player, Fizz is such an annoying card because its ability negates removal. Fizz’s ability is less effective when defending but can generate a lot of value during offensive turns. Playing Bilgewater, I mulligan away two copies of Make It Rain from my opening hand because Fizz (and Warning Shot) hard-counter the card.

Unfortunately, I drew it on turn 4. Rather than just letting Make It Rain be a dead card in my hand, I deliberately misled my opponent into thinking that I’m considering casting a removal spell. If you were them playing Fizz, what would you be thinking? Probably:

“The Control player has a removal in his hand. I know this because they tried to cast it but then recalled it. I cannot tap out before they tap out because if they try to remove Fizz, I need to have mana to play a spell so that Fizz’s ability will negate the removal“.

Because of this reasoning, the opponent never got around to buffing Fizz with Pocket Aces and Twin Disciplines, which helped me drag the game out and set up my own win condition. 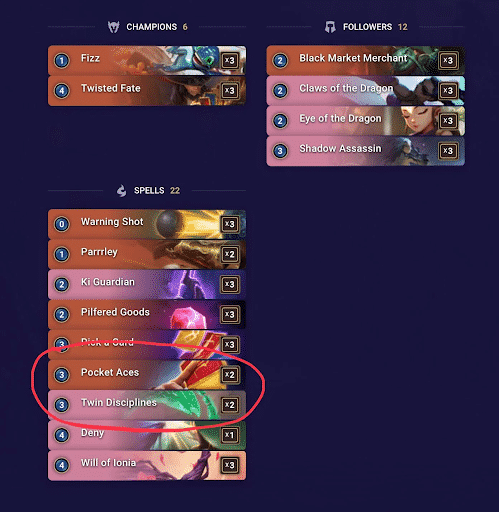 My opponent never got around to casting Pocket Aces and Twin Disciplines because of my bluff. The deck power level relies on outplays in the early game to out-tempo the opposing player. In the late game, I have the advantage.

How to develop this skill

There are going to be situations where you want to “tame“ your opponent’s attacks. This is an incredible skill to develop, as it is a unique way to help you buy time.

If you try to bluff a spell from Shadow Isles, the opponent may decide not to overextend. So, we can say that your bluff manipulated them into not overextending. For example, bluffing with a Vile Feast to suggest that you may have a Withering Wail. Of course, for the bluff to work, your mana has to correspond to the spell’s actual cost. You can’t reasonably expect to be able to successfully bluff that you have Withering Wail if you only have two mana!

You are always going to want to bluff your opponent early in the game so that you can manipulate their entire game plan from start to finish, rather than when you‘re losing when it’s probably too late for a bluff to yield appreciable results.

For decks that like to run buff cards such as Fury of the North or Twin Disciplines, this method of bluffing really prevents them from overcommitting to an attack and forces them not to tap out. Once the attack is through, they may have leftover mana that they would have preferred to spend on a buff, if they weren’t trying to play around your bluff. This is exemplified in my game against Fizz. This is even more damaging for the Fizz player because cards like Pocket Aces are permanent buffs, which means if they’re not using it early, they lose out on so much value over time.

Against decks that run champions/units absolutely necessary for their win conditions, like Yasuo, you can manipulate them into never playing a champion (Yasuo), or playing him very late. Say you are playing P&Z, you can bluff two spells to suggest that you have a pair of Mystic Shots, when in fact they are actually a Get Excited and a Culling Strike. I’m just making things up, but hopefully, you get the idea.

Taken together, all these concepts on bluffing forces them to play a tad bit too careful when you actually don’t have the scary cards they were worried about. This is what I refer to as Application 1 - manipulating the opponent away from playing to their fullest potential

Application 2 - Pretending you can close out the game

As always, I will illustrate the point with an example first. I was playing TF Ezreal, against a Vi-Heimerdinger player. They were a remarkable opponent because they proactively healed all the chip damage I dealt to their Nexus using Vi and Spirit’s Refuge. After healing for 10, I managed to bring their Nexus down to 7 with a couple of Riptide Rex and a wide board. At this point, their board was quite bloated (1x Vi, 1x 8/8 Dinosaur Turret, 1x leveled-up Heimerdinger, and 1x 4/2 Elusive Turret). I had 4 units on my board and my life total was 11. The next turn they would be attacking and they had 8 unspent mana. If they summoned two more Elusive Turrets and combined that with Twin Disciplines, I would lose the next turn.

In my hand, I had 6 damage worth of Burn spells. They had 7 health. I bluffed them by attempting to cast a string of spells (Mystic Shot and Get Excited). One of my units is a keg which adds +1 Attack to my spell. So from their point of view, they must have felt that “Ah, this guy has lethal. But he doesn’t dare cast it because he thinks I probably have Deny”.

Because the Veimer player had to save 8 mana for two Deny, they didn’t play any 3 cost spells to summon more Elusive Turrets. Next turn, they open attacked, and I survived for another turn because I had Chump Blockers. The following turn, I drew a Black Market Merchant and stole a second Get Excited from them. I played some more units, one of them was a Petty Officer and it summoned a Caustic Cask, which really freaked them out. They used a Hextech Transmogulator to transform my Caustic Cask into Petty Officer, but by that point, they didn’t have enough mana to Deny my Burn spells and I finished them, securing a sweet, sweet, victory.

How to develop this skill

A lot of players will surely face the situation where they lose a game because they are just missing one damage to destroy the opponent's Nexus. It is important to recognize this.

In these scenarios, even if you don’t have exact lethal, by bluffing that you are going to play spells, you are suggesting to the opponent that you may have lethal but can’t reliably close the game because you are respecting their heals or denies.

This influences your opponent’s behavior. Suddenly they are wary and they bank mana just to counter you. If they are banking mana to deny you, then they cannot develop their board or cast spells as much as they like, thus buying you some time to draw even more cards to reach lethal.

Another example is something like Atrocity. You can’t be the one casting your spells first and tapping out because then they can cast Atrocity and their spell will take effect first due to the ordering of the spell stack.

By pretending to play a spell, your opponent thinks that you have lethal and so wouldn‘t dare cast Atrocity until you tap out, which again buys you invaluable time to find your final remaining damage.
It is important to understand that this “deadlock” or stalemate situation whereby both players are waiting for each other to act first can last multiple rounds, which is usually more than enough time for you to find lethal and more.

Thus, you need to bluff your opponent first by letting them think you have lethal but are just waiting for them to tap out to cast it safely. Once they think that, you will have created an artificial stalemate situation and bought yourself some time to find the cards you need.

I hope you enjoyed this one. Remember this is just one part of bluffing. There are at least four parts that we have not discussed yet. So, the next time someone said that LoR is pure RNG rock paper scissors, you know they are wrong.

See you guys next time! -Crixuz 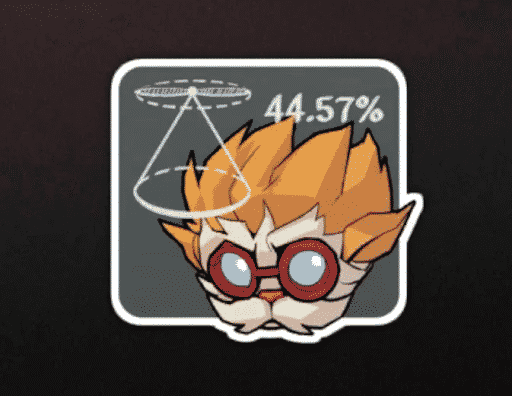