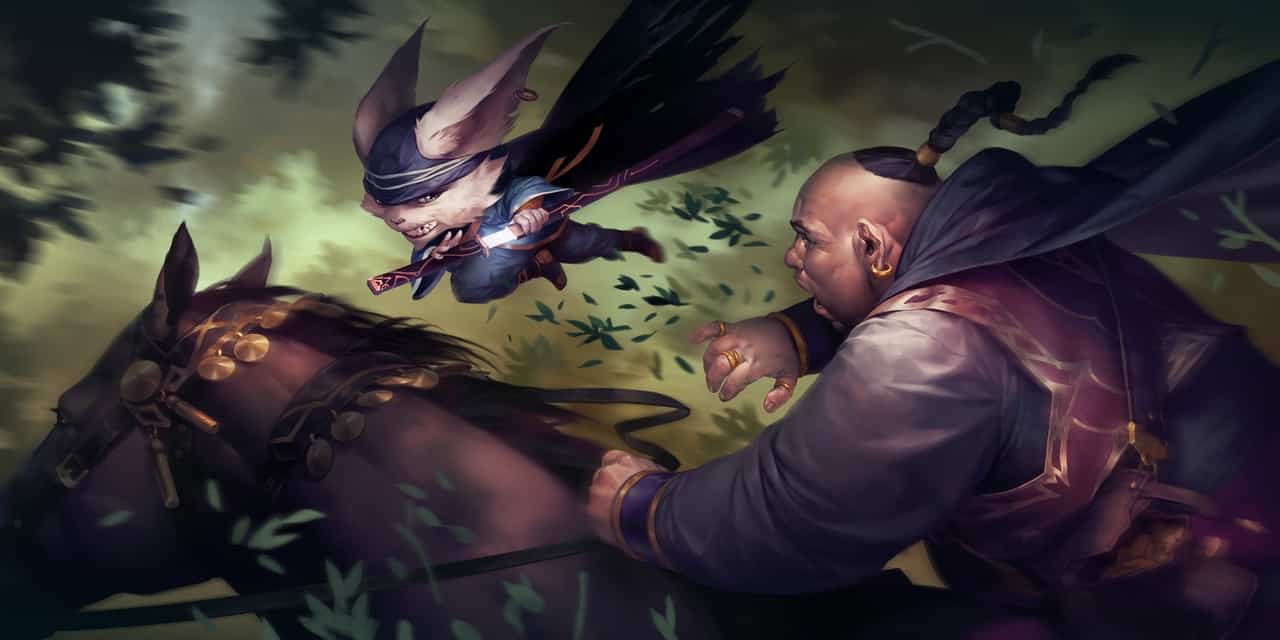 Hi everyone! It’s Daddys Home, Masters player from Australia, coming at you with a new deck guide for Noxus Elusives! This deck has been taking over the Asian server recently, as it has good matchups against some of the Midrange decks that can be found on ladder at the moment, such as Tempo Endure and MF/Sejuani.

This deck seeks to end the game very quickly by using Elusive units from Ionia combined with the insane over-the-top damage spells from Noxus. If you like fast and explosive games, then this is the deck for you. 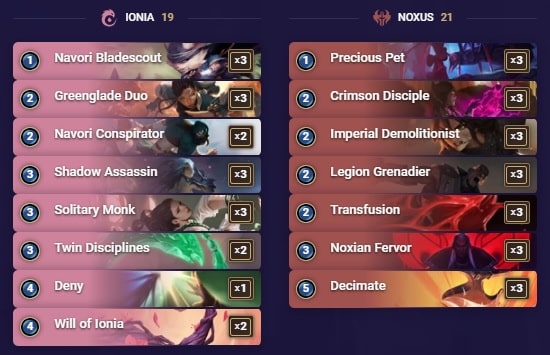 - Great matchups into most of the current meta decks

- Ideal to climb quickly, as the games are short, also cheap to craft with no champion or epic cards

- Has a hard time against decks with any form of healing

- No comeback potential, you either end the game early or you lose

Navori Bladescout - Only drop this on Turn 1 if you have the attack token and no Precious Pet in hand. Don’t be afraid to Recall this with the Navori Conspirator to regain the Elusive keyword.

Precious Pet - Few units can block this guy in the early game. Always keep this card if you have the attack token on Turn 1.

Crimson Disciple - The best 2-drop in the deck! Combos well with Transfusion, Imperial Demolitionist, and you can even Recall it with Navori Conspirator to regenerate its health. Try to trigger this card’s ability as often as you can.

Greenglade Duo - A solid 2-drop for the deck. It’s weak to 1 damage pings, but can be deadly if the opponent lets it live. Using Transfusion to keep this card alive is often worth it. Great card if you are attacking on Turn 2.

Imperial Demolitionist - A good body with a strong effect. Use it on Crimson Disciple for 4 damage on the enemy Nexus. Keep in mind that it is a slow effect, and your opponent can disrupt it by killing or recalling the unit you targeted.

Navori Conspirator - 2 mana for a 2/2 Elusive card is nice, plus you can do some tricks like recalling a Navori Bladescout to regain the Elusive keyword or Imperial Demolitionist to get another 2 damage off her skill.

Noxian Fervor - Excellent burn card that requires a decent amount of skill to use. Always try to use this card reactively so you can deny removal. For example, if your opponent targets one of your units with a Grasp of the Undying, you can react by playing Noxian Fervor to deny the heal.

Shadow Assassin - A sturdy Elusive body that recycles itself.

Solitary Monk - This is my favorite card in the deck. Difficult to answer at 3 health and you can protect it with your spells. Over the course of a game, this card will often get 8+ damage in. Keep this card in hand if you are attacking on odd turns.

Twin Disciplines - Flexible spell that resolves at burst speed. You will usually use this offensively for damage, but you can also use it defensively on an Elusive ally if you think it can get another hit in.

Decimate - Amazing over-the-top damage. You can top-deck this in the late game if your opponent has stalled you out.

There are certain tech cards that you can include depending on how the meta shifts: 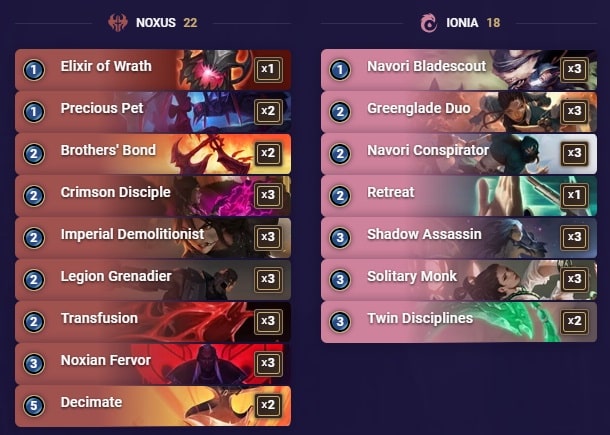 Sea Monsters - Kill the Deadbloom Wanderer with a Noxian Fervor and they shouldn’t be able to stabilize. Many greedy lists have been dropping the healing package, so you should have a good matchup against them, but the aggro-teched version is going to be a problem.

MF-Sejuani - Crimson Disciple makes it difficult for them to utilize Make it Rain. You should outrace them thanks to your Elusive units.

Heimer-Vi - Keep Noxian Fervor to deny Vi’s level-up. They have almost no healing except for Spirit’s Refuge and are quite slow to set-up, so you should be favored. If they drop Solitary Monk on Turn 3, kill it asap. If they bank mana on Turn 4, they are preparing to drop Heimerdinger and protect him with a Twin Discipline, so just go for the face.

If they drop Heimer with no mana left to protect him, use a Noxian Fervor on him. Always keep 3 mana to threaten Heimer past Turn 5. You should be able to kill them before Heimer generates too much value.

Tempo Endure - You are heavily favored, as they don’t have many effective ways to deal with your Elusive units. Watch out for Blighted Caretaker on Turn 3 though.

Freljord Elusives - Hard matchup, as they can curve out nicely and block with Elusive units. Try to use your Precious Pet in the early game for some easy damage and end them before they can go too wide.

Noxus Elusive is an exceptionally strong burn aggro deck that has some great matchups in the current meta and is also incredibly cheap to craft. If you are looking for a cheap deck to climb with before the season ends, look no further!

If you have any questions, you can join our Discord. I hope this guide helps you with your climb to Master! -Daddys Home