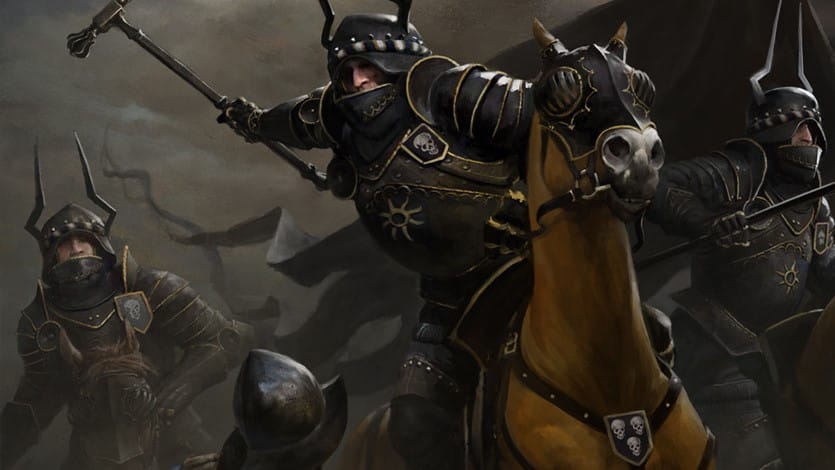 Welcome to the next installment of TLG's Crimson Curse card reviews. This article is a collaboration between SirLoathing and Orphantears. Nilfgaard has received powerful tools with the new cards, but lacks the general cohesion that other factions have. This has led to multiple styles of decks appearing on the ladder with no clear best new strategy. We will begin our tour of the NG Crimson Curse cards with the new leader - Anna Henrietta.

The strength of Anna Henrietta has yet to be fully determined. She offers higher point potential than the other NG leaders and currently stands as the best NG leader for a Midrange mirror. After experimenting with the new Assimilate mechanic, it's clear that despite Anna's ability triggering the Assimilate, it isn't a strong archetype to build around. Anna’s strength comes from offering a single strong play for a NG deck that doesn’t have enough room for Ardal tactics and doesn’t benefit from Morvran’s boost. When building Anna decks, look to play board controlling golds of not too high provision costs and lean on Anna for a strong finisher when your opponent has
3-5 cards left in hand. This strategy often yields large point swings that are difficult to overcome in close rounds.

Damien de la Tour doesn't see that much play. His ability
is incredibly strong, but the Order tag makes it difficult to get off before he gets removed or locked. Most decks that run him include Petri's Philter to ensure his ability actually goes off. However, this play isn't impactful enough nor very popular in the meta. Damien isn't worth the provision cost.

Vivienne de Tabris has been a surprise since the beginning of the patch. She's most likely the strongest Crimson Curse NG card. Her Deploy ability works very well with Roach and Leo Bonhart. Are you feeling a little frisky? You can always attempt to get massive value by comboing her with Zoltan Scoundrel. Vivienne is a very promising card that can only get stronger as more cards are being added to the game.

Units with the Assimilate tag boost themselves by 1 whenever you play a card that isn't from your starting deck.

Artorius Vigo is currently pretty popular. He has Assimilate synergy, but the main use is to either pull Impera Brigades from your deck for good thinning, or to create a Doppler in a full human list for a big point swing. A decent card that's fun to build around. You might run into consistency issues.

Tourney Shaelmaar is a card that we honestly haven't seen used or explored at all. Its ability definitely isn't the worst of all NG cards. The best use is for comboing with Assimilate. This tag is unfortunately quite weak when compared with Harmony and Thrive. It needs a lot more support before it becomes viable, which would also make Shaelmaar better. 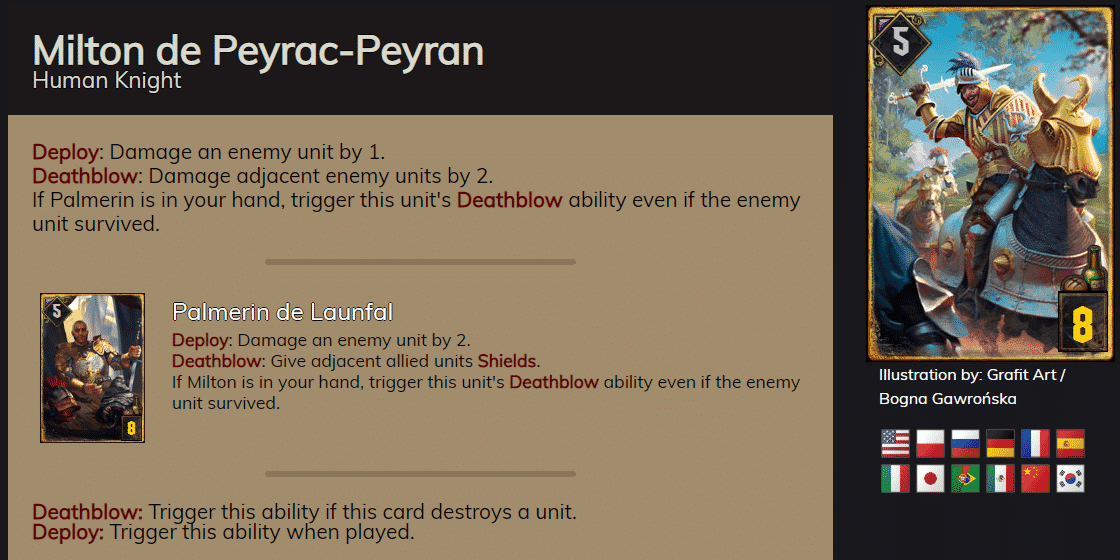 Milton de Peyrac-Peyran is the better half of the team with the ability to hit a unit for 1. If he kills the unit, he also damages the adjacent units by 2. Conditional 10 point card, unless Palmerin de Launfal is in your hand. This card has promise giving more points than its provision cost, however potentially having to include Palmerin makes it worse overall. A solid addition to NG, but not extremely impactful in the current state of the game when you run Milton alone, as people tend to play around Deathblow because of Gregoire.

Palmerin de Launfal mostly provides synergy with his buddy Milton, similarly to Serrit and Auckes, but definitely a weaker team of cards. His utility to provide shields while being a 7 point card isn’t the most appealing, but can sometimes be useful to protect your units against row effects like Lacerate.

Roderick of Dun Tynne is like Prince Villem on steroids. His RNG is more controllable, giving you 2 options so you don't pull your win condition in Round 1. Very decent card which also provides great utility to get to the rest of your golds consistently. NG does rely on comboing their golds, for example Letho, Serrit and Auckes, which is the reason why Roderick quickly became a staple for most NG decks.

Menagerie Keeper is an average card for decks like Ardal. Having a Tactic card in your hand makes Keeper a 6 for 5. This card isn't too impressive, as its use is fairly limited due to the lack of good Tactics to keep in your hand. There are definitely better 5 provision cards to include in your deck.

Tourney Joust makes Ardal players happy, as they finally have a servicable 4 provision Tactic card. It's a very cheap way to get to the desired Tactic threshold of 4 to empower Ardal's leader ability. You can sometimes keep it when you suspect shield shenanigans, otherwise it's muligan fodder.

Duchess's Informant is one of the more interesting cards NG was given in the expansion. She's quite flexible, as she can provide you with both Assimilate and Spying synergy. Her ability to copy a Bronze card on your opponent's board has a varying strength, dependant on what your opponent is playing. You can rely on finding good value with her in a fully blown spy deck. Assimilate decks are weak in general, but Informant is the perfect fit once the archetype is good.

Imperial Diviner is yet another Assimilate archetype card. You can use it to unlock a powerful Order card like Ocvist. The most optimal timing is to drop a card like Damien or Stefan Skellen in the middle of the round, because if you use Diviner to unlock your finisher, you aren't getting any value from its Assimilate. It's an okay utility card, which can become better as the Assimilate archetype gets more love.

Ducal Guard is dissapointing. It would have to proc at least 3 times before you could consider running it over the other 4 provision cards. Almost every card which procs Assimilate also has Deploy and that means Nauzicaa Sergeant is just the better engine. But then again, maybe you could build an engine overload Assimilate deck that wants to run both.

Fangs of the Empire isn't very impressive because poison cards are weak. It takes two Fangs to destroy a single unit. Currently, a 4 provision card has to be an engine, earn at least 5 points upfront, or threaten 6 points to be worth it. Once the poison cards get buffed, Fangs could be better.

Toussaint Knight-Errant is an excellent card. It can either kill a Thrive unit, or almost always play for 6 points. Unless the meta dictates otherwise, most Nilfgaard Decks should run two copies of this card. Reliable Wolf Pack on steroids.

Nilfgaard received a few very strong gifts from the Crimson Curse. Vivienne De Tabris has already proven herself to be a flexible finisher. Vigo and Milton seem to be strong when built around. Roderick and Knight-Errant offer value at a cheap cost. Although the Nilfgaard archetypes didn't receive the help they needed, the new cards bring power and points to the faction. You have decent new tools, a unique leader and many deck building possibilities.

Thank you for reading and if you have any further questions, please join our Discord: https://discord.gg/uSUSJZr

All images were taken from https://gwent.seven7y.com/?lang=en