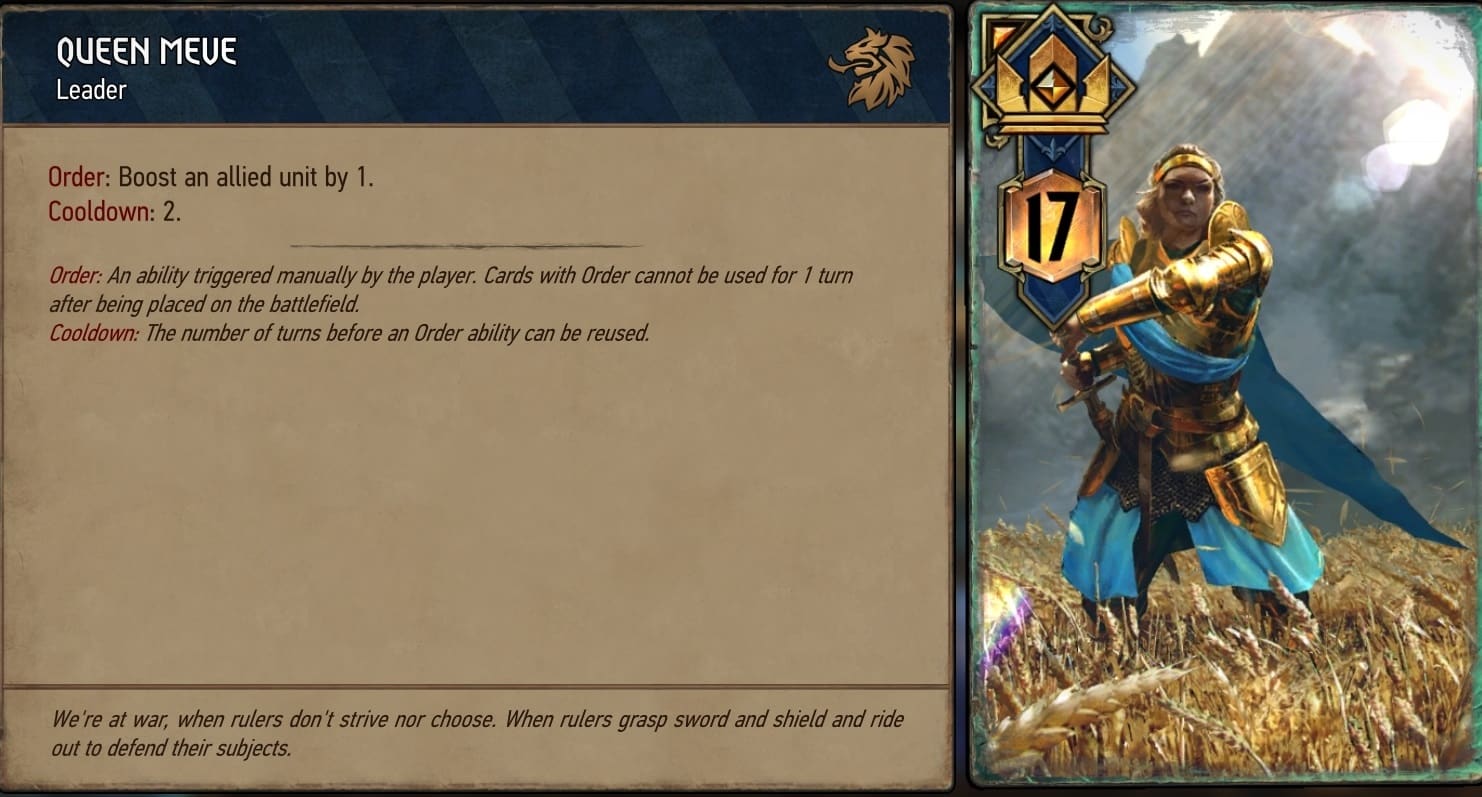 Before the Jan 31st leader patch, Northern Realms was regarded as the lowest tier faction. Although the balance changes in that patch partially deserve credit, Queen Meve arrives as the herald of Northern Realms’ rise to power. She is a leader who solves the largest problem NR players encounter on the ladder. Unlike other factions, NR’s entire identity revolves around the units it plays living. Whereas other factions focus on units with various types of Deploy abilities (or just big monster units), NR’s best gwent cards not named Ves always trade down if they die before you can use their abilities. Playing a few games with Meve quickly demonstrates how much a simple boost of 1 every other turn can contribute to keeping an entire army alive. NR has a snowball effect where if one unit lives your other units will as well. If you had given up on NR shortly after Homecoming’s release, finish the Meve portion of your reward book and start brewing.

In this article I will cover two specific directions that have been taken with Meve that have shown success in small tournaments and on the ladder since her release. There are other options that have not been as explored as the two we will look at there. I encourage you to sleeve up your Meve and explore the unexplored. She could support anything from a full boost deck to a human’s Draug deck to whatever degenerate Northern Realms combo synergy you are interested in exploring. Without further ado, let’s take a close look at the two most successful Queen Meve archetypes at the time of this articles publishing; Engines and Shupe.

Two seasons ago Foltest Engine Overload was a strong tier 2 deck. Meave reinvigorates this archetype with a deck that sees success on the ladder and a deck many players decided to pilot at the most recent open qualifiers. Queen of Engines is truly the greediest engine deck possible for 167 provisions. Queen of Engines is to NR what 2x Ghoul, 1x Ozzrel, 1x Incantation is to Monsters. If your opponent doesn’t bring hate, you have all the tools to take over the game and bury them under the orders abilities of your units.

The deck features multiple combos and has the potential for the largest finisher in the game with round three last say, constantly feeding a 20+ power Hubert.

In terms of the sample list; you do have many tech options. At the open, for example, players chose to fit various tech cards that included Strays of Spalla, Aguara, or Mahakam Ale. To note; most successful versions of Meve engines do not run Witchers and instead play Roach for thinning. An engine overload strategy generally prefers more high impact engines over running witchers. It truly stands out as a deck style that benefits more from just drawing threats then thinning to specific threats.

Unparallel long round when left unchecked

Many must kill targets

Fun (This is certainly a personal bias; however, having many cards to click during my turn greatly amuses me even on pro ladder.)

Unique games (Your deck features many combos, because you are often forced to play high provision cards to take round one you have to find which combo will win that round.)

Hugebert is huge (Don’t forget to float damage effects round three once they are out of removal so that your hubert receives the buff. This can often include cards like Vincent or Seltkirk and not just obvious damage cards like Ocvist.)

Targetable (At the open many of us discovered that the magic number to beat meave is 8. If your deck can achieve 8 disruptive cards the Meave Player cannot win a long roudn three. This includes things like Dimeritium Shackles, Strays of Spalla, Blue Dream and Shupe)

Targetable at a low cost (On the ladder recently many players are teching Dimeritium Shackles. It comes at an incredibly low cost and can swing an otherwise favorable matchup. This is similar to players teching Bomb Heaver but an even lower cost for higher reward. For example; Craite players are often happy to draw Shackles in other matchups where it may shut down something like Nekker Warrior while providing Bloodthirst for the rest of the round.)

Welcome to Gwent the Midranging. A few days before the qualifier Green Knight and myself were working on our lineups. I was a huge advocate for Meve engines whereas Green Knight saw the deck as too easily targetable. After some discussion and brainstorming we started exploring how one could take the best parts of Engines and play them in a shell that crushes the mirror without losing to the hate. Essentially, this means cutting all the row locked cards. This means playing a deck that when its pushed can punish the opponent with high tempo plays. What better way to do that then run Shupe, Unicorn, and Chironex? In our first testing game we hit Shupe Handbuff and quickly realized the power of the deck. I took it to an 18th place finish in the qualifiers (missing day 2 on tiebreakers) where as Green Knight took the list all the way to a plane ticket for the open. Clearly the deck is strong; it is certainly the best Shupe on Handbuff deck we have ever seen due to not only the synergies cards in it receive from buffs but also to how multiple handbuffed engines are a nightmare to remove from the board.

Unlike the Queen of Engine counterpart; Meve Shupe is a resilient reactive deck that can make proactive engine plays when given an opening to. The deck utilizes Meve not only to help engines live but to help Unicorn and Chironex make a pairing. Your bronze core focuses on boost synergies over additional engines. The boost cards have strong upfront value and are difficult for an opponent to deny.

If you decide to pick up this list; in general you want to play witchers and 5p or bellow bronzes in round one and then pass. The deck truly doesn’t care about having last say, it is much more invested in resource preservation. Although you do not sport combos like Yen + Blaze that Queen of Engines has, you do sport small combos like Ves + Seltkirk or Unicorn + Anna Strenger. As such, breaking up your own synergies in round one when you don’t have to can put you at a disadvantage round three. Generally speaking, it is okay to lose round one if you’re up a card so that the opponent is forced to risk a card if they want to execute a round two push. Some decks are exceptions to this; for example Eredin Slyzard is a deck that Meve is tasked with pushing round two. Try to familiarize yourself with what decks you have to push as a Midrange deck and be ready to concede round one in favor of a stronger round three if the opponent’s deck does not require you to push it.

Difficult to beat in a long round

Some hands can be awkward when missing pieces

Can be very reliant on Shupe Handbuff against other high power round three decks.

Meve’s place in the meta:

Meve is to NR what Crach is to SK. She provides what every NR deck wants without offering a strong combo finisher. Where as Henselt or Ada’s ability will help you on one specific turn; Meve aides you the entire game. She will never threaten a single large play like Foltest providing an ensured Ocvist Zeal; but in return she will help every drummer you play get that Ocvist online. She is much more subtle and as such provides an overall higher power over all three rounds.

Meve’s value comes from a 6 hitpoint botchling dodging an empowered Serrit and then later that same round she may earn an extra point off her hero ability boosting a Tridem. She represents the core Northern Realm principles at the cost of the raw single turn power that the other leaders brings. Well, except Demavan. In theory, a Dema engine deck should actually beat a Meve engine deck heads up simply because his leader ability is worth more points over an entire game if his engines live. However; in the current state of Northern Realms having your units survive is more important than helping them accrue more value when they do survive naturally.

In the eyes of the person writing this article; Meve is the Tier 1 Northern Realms leader. Both her Shupe Midrange and Engine Overload variants are fun yet powerful weapons to que up with on the gwent ladder.

From a design standpoint Meve is boring. She doesn’t really do anything cool on her own; however, the strength of her design is much more subtle than that. Meve allows you to play cards you could not otherwise play with on ladder because without her help the card would be too frail.

Meve brings a unique threat to the Northern Realms lineup and until a major patch changes the balance of power with removal or until a patch hits her provisions; she will be the tier one NR leader.