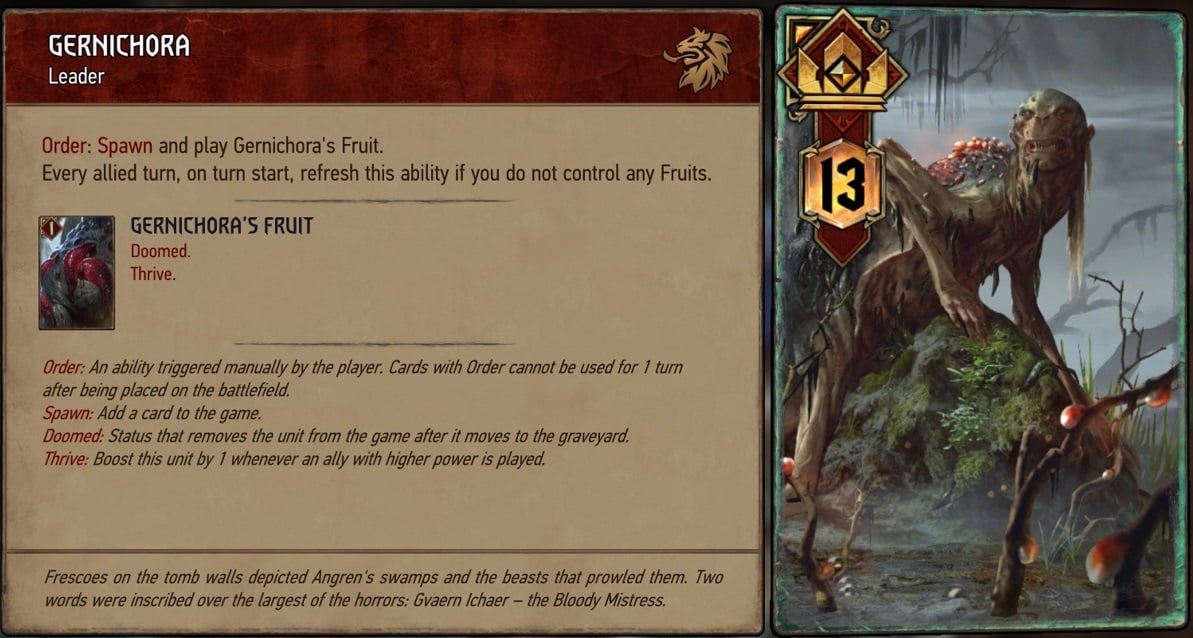 Every allied turn, on turn start, refresh this ability if you do not control any fruits. (Gernichora’s Fruit: 1 Point. Doomed. Thrive. )

Let us begin delving into Gerni by appealing to the players of Gwent to not ask CDPR to nerf monsters. The faction certainly didn’t need a new tier 1 leader and certainly has the most tier 1 leaders. This is not because the faction is too strong; other faction designs would thrive if they featured both the internal synergy and inherent strength that monsters has.

Gerni brings to monsters something unique within the faction’s leader pool. Let us compare. Woodland offers a single powerplay that will trigger all of your thrives and undoubtedly provide tallest unit for monster’s tallest unit synergy. Eredin provides the threat of a single large point engine play that can be backed by monster’s best tools. Elder offers the best pushing round of any monsters while also featuring unique and often fun deathwish combos. Let us not speak of Arachas Queen. Gerni offers the most points over the entire game. She is a loving monster’s leader whose round one is on par with Elder while also offering help pushing and still giving you “free” points in round three. In the immediate tense, Gerni has overtaken all other monster leaders; however, this will not last. At the qualifier we saw Woodland Shupe rear its head to smash tallest unit away from Gerni players pushing TLG member Beardy Bog to day two. On ladder, many of my teammates are boosting 2500+ monster fMMR with Eredin. I write this to point out that although Gerni may be the most powerful monster leader at the moment; she is not the only one. Gerni is safe, she is strong, and she is versatile.

In this article we will be looking at the two most extreme examples of Gerni decks in depth and then look at two unique takes on Gerni by two different streamers. Unlike most leaders; a plethora of Gerni styles on the spectrum between Greed, Midrange, and Combo are viable. I will not be delving into Gerni Slyzard combo decks; however, I have lost to them and know they have strength when unchecked. We will first look at the greediest well performing Gerni list and then we will look at a Gerni Midrange deck from the qualifier. The bonus decks we look at show how you can customize a Greed Gerni and a Midrange Gerni for your own playstyle. Shoutouts to my teammate Wusubi for compiling the first two decks (I may in fact be a degenerate Eredin player when I ladder monsters. :shrug:).

Gerni Ghouls plays at minimum two ghouls and sometimes three. The deck has many small customizations that can be made depending on what matchups you want to strengthen and which you feel comfortable in. The most important tech decisions tend to include Nithral, Dorregary, Cyclops, and Forktail. All versions play Crones and all versions play Speartip. This deck aims to utilize Gerni for the free points in every round. It rarely passes round one and often pushes all the way round two. The deck plays very similarly to Big Woodland from the previous patch, except it has even more points round one thanks to Gerni’s delicious fruit.

To note: Cyclops has brought a new angle of control to monsters that Big Woodland did not previously have. Unlike before; the failsafe of Cyclops tossing a fruit (that can then be respawned) allows you a strong six provision control tool in an otherwise greedy deck. All versions of Gerni Ghouls runs at least one Griffon as a backup target for its Ghouls.

Combos/Engines (To note; Gerni Ghouls does not have enough removal to stop a full engine deck in a long round. It does; however, have enough tempo to bully an engine deck out of round one with the right hand.)

Leader Combos (Gerni Ghouls cannot stop an uncontested leader combo such as Harald + Dagur in a short round or Eredin + Slyzard in a long round. If the Gerni player is aware of the opponents plan they do have the tools to prevent the situation from arrising.)

If you haven’t noticed by now — it is generally a successful strategy to take a greedy deck, cut the greed and add Unicorn, Chironex, and more interaction. Midrange Gerni trades over the top plays like Speartip that can be easily answered by a prepared opponent for solid value cards like the magic ponies, enraged ifrit, and Hanmarvyn’s Blue Dream. Many players on Midrange Gerni opt to run Geralt: Rivia in the place of Ifrit or Blue Meme. There are other tech options available. The core of this deck idea is to thrive your fruit to five while interacting with your opponent and then either eat that tasty fruit or pass the round. This maximizes your leader points over every turn while not exposing yourself to common hate brought against the monster’s faction.

Midrange Gerni truly highlights the power of Monster bronzes like Drowner and monster’s Carryover with the crones. The deck does nothing particularly exciting while almost always giving the pilot room to outplay their opponent. Winning games with Midrange Gerni prove strong skill tests and reward intelligent players.

A small note on the single Golyat: don’t be a dummy. He is not meant to be naked on board. It is almost always correct to only play Golyat after an opponent has passed where you need 10 point body + thrive triggers to close a round.

Many interactive cards that let you mitage your opponents board

Not vulnerable to tall removal and other monster hate (such as Blue Dream, Hym or Ulf) can be played around

Not as much raw power as bigger monster decks

The Gerni deck that Quill and Lance took to the qualifiers and often streams with is not exactly a Gerni Ghoul deck but still sports tall units. The real defining two cards of this build are Imleriths Wrath and Striga. These cards force you to play your big boys early and often but reward you heavily when they stick. In some matchups, Wrath is a complete blowout; in others, it acts as engine removal. As such, I have found that it has some unique differences and is worth looking at when understanding your options with Gerni. Quill’s Gerni has enough removal to shut down a Meve Engine deck; can generally out point big monster mirrors thanks to Spear Tip and Imlerith’s Wrath. Essentially, you are a more interactive Gerni Ghoul deck with a slightly worse short round and using cards that feast or famine even harder in the face of monsters hate. If I sat down for a ladder session with Gerni and thought “today there won’t be an Rivias but will be some of those degenerate Meave Engine players” I would likely bring a deck like this.

What if we build a Gerni deck that never produces an 8 power unit to dodge Eyk/Rivia but goes taller than the 5 thrive Midrange Gerni is generally forced to stop at? This is the question that Trynet asked himself when preparing for the qualifier. Never thought I’d be sure that the game was put away against a midrange opponent only to see them slam an Ice Giant, thrive their board to 6, and proceed to do the same thing the following turn. Remember how good Frenzied D’ao was at thriving on homecoming release? As long as players choose to target monsters with Geralt of Rivia, Geralt Professional and Eyk of D; Ice Giant will be an acceptable tech card in Gerni decks to build around.

Gerni’s place in the meta:

Gerni is a high tier monster leader and a good choice to ladder with for any monster strategy. When you que into Gerni, you know that matchup will be difficult and also know your opponent could be running a number of different strategies (not a one trick leader).

Gerni has chiseled out a spot as the go to Monster’s leader. Her ability is unique and flavorful (really flavorful, have you tried her fruit?). She is to monsters what Craite or Meve is to their respective faction. Gerni supports the intrinsic synergy of the faction without specializing in any particular field.

Gerni’s power cannot be denied. Unless she is hit with a provision nerf, she will be a mainstay of monsters for the next few patches. She offers strong round 1, 2 and 3; which is the mark of a strong leader in the current meta. To note; Gerni is the most played leader that is below 15 provisions AND monsters has good options for higher provision leaders.This only speaks to her power level.