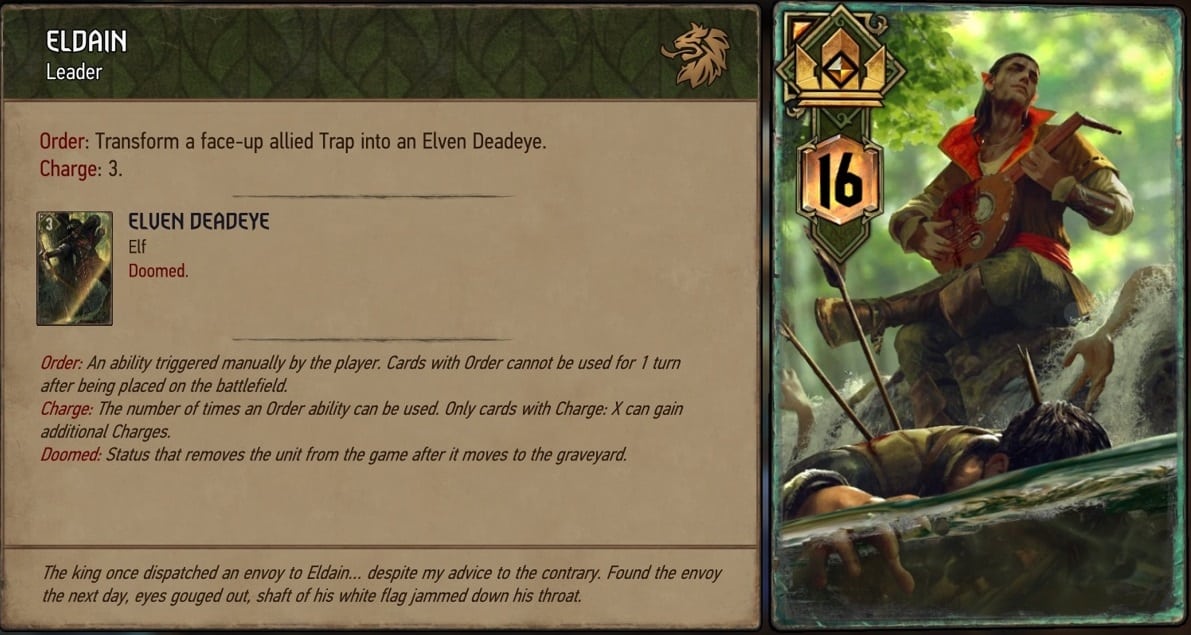 Eldain arrives during a difficult time for the Scoia’tael. The faction has seen a series of nerfs since Homecoming release that has left it in shambles. Eldain has been released with recent trap buffs; after a few weeks of play it has become clear that the Scoia’tael are not a tier 1 faction this patch nor is Eldain the best trap leader. Let’s start with the bad and then delve into one Eldain deck that looks at “the good” the leader provides in the current patch. I warn you, this article contains harsh words about Eldain and only one deck list. A deck that happens to be degenerate, cheesy, and has very stilted matchups.

In preparation for writing this article I tried a number of Eldain decks on Pro Ladder. From Eldain Shupe to Eldain Elf Swarm. The Shupe version of Eldain felt like a much much worse version of Brouver Shupe with less utility, less power, and an even worse short round. The Elf Swarm version of Eldain attempted to use his hero ability to call Aelirenn, use Isengrim synergies while still having the Iorveth/Pitfall close for a short round. This deck on paper looked good to me but played out a bit miserably. Possibly with card buffs an elf swarm version of Eldain could have merit. To points out; Iorveth and Sage (the 12p that searches for an artifact) are both Elves that can be found with Call of the Forest. In the current iteration the only deck I found success with was Eldain Bamboozle. We will delve into that list shortly, but first, some discussion about why Eldain doesn’t work —

Card changes and tweaks must happen before Eldain sees much serious play. The core issue is that Eldain does not synergize well with what is currently the best Scoia traps (Crushing Trap and Mahakam Horn). It is difficult to gain enough value from Eldain’s hero ability to justify running him over another Scoia leader. Let me explain some what I mean; much of the time when you play Crushing Trap round one your opponent is either forced to pass (in which case you didn’t need Eldain’s ability) or they can play through it (in which case Eldain does not provide enough to tilt the scale). On the other hand, Brouver’s hero ability lets you essentially get 4 points per charge with a crushing trap (two damage on the push and two additional damage for the trap trigger). Mahakam Horn provides four points to each adjacent unit and only flips after the opponent passes. As such, there is no window to use Eldain’s ability on the horn itself and if you are transforming another trap that flipped earlier in the round so that your Deadeye can receive the horn buff, then you are counting your horn points on a Three power unit surviving, which is clearly dangerous. It could be pointed out that you can transform the Horn into a Deadeye after it flips, but generally you will have to “keep your card” and not be able to activate Eldain without losing said card. In the case of round three, you need last say to be able to Eldain a Mahakam Horn, which makes things very difficult. In your best hands you are often forced to use Pitfall when you don’t have last say to stop whatever large unit your opponent tries to protect from Dragon’s Dream. Without last say this is another example of a time you play a trap but do not have a window to use Eldain on it (if you last card Pitfall when your opponent has last say the turn doesn’t come back to you to Eldain the pitfall). As such, Eldain is a bit of a design failure with the current card pool. This could change, and I hope it does, because the idea behind Ambush cards as a supported class theme could lead to unique gwenting.

The good, an aside — we are using good in the competitive sense and not the “healthy for the game” or the “fun” tense — the good part about Eldain is that he allows you to build a board of artifacts, that include traps, without offering your opponent interactive points. Then, when it is late into a round, you can use your hero ability to suddenly “get on the board.” In this list this sudden arrival of an Elven Deadeye can help you take round one from behind or provide a body for Garrison after your opponent has passed. In other builds of Eldain I tried using this ability with Call of the Forest — it almost worked well enough and with some Scoia buffs Deadeye into Call could be viable.

This decklist did get me to 2516 Scoia fMMR. I tried a more “fair” version of the deck that didn’t rely on dragon’s dream. It was functional and it is possible that the deck could evolve into that if people continued to work on it. Let’s discuss this list and how it plays then talk about how the deck might evolve into something more robust and cancerous.

The idea behind the deck is you force a long round three and then give your opponent minimal points to interact with and close with the combo of Dragon’s Dream into Crushing Trap into Nivel to tag their entire board for 5 damage. Your points come through Summoning Circle, Saesenthessis, Garrison on Saesenthessis, Mahakam Horn and Eldain. As such, your points are incredibly difficult for your opponent to contest and you even have Serpent Trap to protect your Dragon from Scorch. All of this adds up to a very degenerate and difficult to interact with round three. Similar to, for example, Eredin Slyzard. Where this deck fails in comparison to Eredin Slyzard is that it doesn’t have the tools to force a long round three against many decks. Most monster opponents can simply push you round one and then push you round two. If a Morvran opponent has read this article and smells Dragon’s Dream, they will also push you round two (even when down a card). Despite that, you have enough ways to build your board without offering points that the opponent can interact with that you can make it very difficult for your opponent to actually get far enough ahead. Sometimes you can even burst ahead of them such that you can place an early Dragon’s Dream in round one or two that can force the opponent down enough cards to allow you to win a short round three on the back of Pitfall Trap.

I eventually cut Iorveth for Impenetrable Fog so that (1) Prince Villem more consistently always hit Dragon’s Dream + Nivel and (2) because Fog is quite good in this deck. It is a source of eight points that requires you to commit nothing to the board. The extra provisions form the Iorveth cut allows you to play the one of Hawker Support and Dol Blathanna Archer. Archer to help not auto lose to Nekkers and Support provides a very needed six point round one play. Remember that round three you can Summoning Circle for Hawker Support the same turn you Garrison Dragon for added boost on your Saesenthessis.

It is almost unfortunate that this deck could evolve, with the proper tools, into something more resilient. The deck needs one or two more high tempo plays and one or two pieces of tall removal. Saber tinkered with the list and brought a version without Dragon’s Dream but with Rivia to ladder for a bit; we both concluded that that was a helpful step against Monsters but not ultimately what the deck needs.

As a competitive player, I will play what works wins for me; personally, I am not excited to see a deck like this do well. It speaks poorly of Eldain’s design that his greatest strength as a leader is using his ability to “protect” producing any interactive points until it is too late for your opponent. This is the style of play that’s reminiscent of Thunderbolt/Spear Eithne from Homecoming release. This deck, as is, is dangerously close to being able to do that in more matchups. In the end, it is just a bamboozle deck lacking the proper tools to beat an opponent who is prepared. If your goal is winning games on ladder, I would recommend not playing Eldain. Though, if you bring him on the right day (aka no Monsters in sight) he will garner a few ranks for you. After all, I did break 2500 with this list.

Eldain’s place in the meta:

In the current meta Eldain’s job is to remind us every time we open deck builder how much over nerfing a faction takes a toll on new leader releases.

As explained earlier in the article; Eldain suffers from two of the best traps in the game not playing well with him. He rewards you for flipped traps, but often the most threatening traps are the unflipped ones and we do not have time to use his ability before a round ends.

Additionally, the entire idea of a “trap deck” means having a deck that uses many artifacts. As a player, I don’t particularly want to see a return of Artifact decks to the competitive meta. I will play them if they are good, but would hope CDPR finds a way to rework Eldain and/or traps.

Let me give an example: in the next set we could have traps that produce units or are better the more elves you have. This would encourage players to NOT play full artifact decks to maximize Eldain but to use him alongside “normal” decks.

Another possible solution for Eldain is to let him “mark and reveal” (but not flip) his traps such that on a turn they flip they transform into Deadeyes at the end of turn or such that they Transform into Deadeyes at the beginning of his next turn (whether they have flipped or not). This would allow him to use hero ability “marking” face down Mahakam Horn or Crushing Trap and be able to pass without losing trap or hero ability value.

This power level is in line with the current patch. Eldain is F tier where he can cage match with Arachas Queen for the title of current worst leader. This may change with heavy rework.