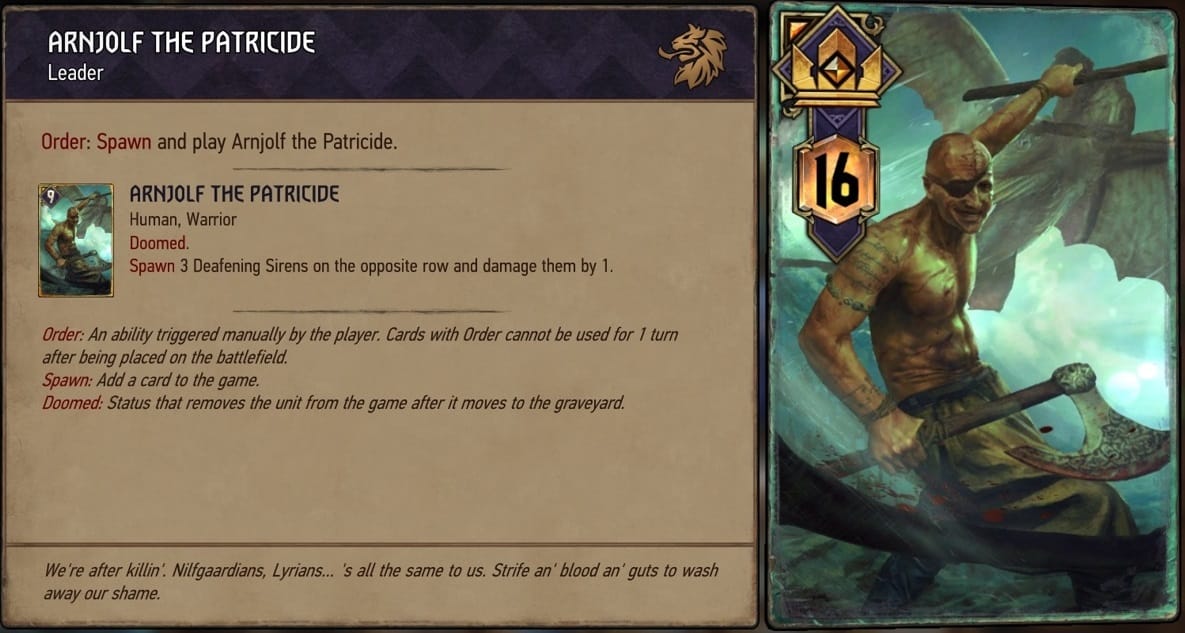 Arnjolf is one of the five new leaders that were added in the most recent patch. He is the only leader in the game which actually plays himself which makes him really unique. In terms of raw power he isn’t particularly strong. He is only worth 6 points and you can’t distribute his power in all 3 rounds like other 6 point leaders like Movran and Brouver. You can compare him to Woodland. They are both 16 provision but Woodland has 2 more points. So why would you ever play Arnjolf?

Arnjolf opens up for several interesting strategies. Cards that benefit from bloodthirst become much more reliable. Svanrige is 11 points for 8 provision and the opponent won’t have a chance to stop that. You will also be able to run cards like Champion’s Charge, Donar and Pirate captains for very solid value. After you have played all of your bloodthirst cards, you can finish off the round with Wild Boar of the Sea or Regis. Both cards will help you finish off a long r3 by wiping the opponents row/board.

Both of the following lists have been used by our pro players on pro ladder with decent results in the beginning of the season.

This list wants to get a long r3 where you can get double spear on the board and destroy everything the opponent plays. Regis should be able to destroy one of his rows and then you have Madman Lugo and Champion’s Charge to take care of everything tall as the opponent might play.

Can be difficult to get to r3
Many of your cards depend on bloodthirst, which means that you might be forced to play leader before r3.

This list isn’t entirely as bloodthirst dependent as the first one. You have more power plays in r1 like Horn and Harald. You also don’t have to worry too much about getting bleed since you don’t spears.

Arnjolf’s place in the meta:

Arnjolf is not a bad leader and you can definitely do well with him on ladder, but he isn’t tier 1. He plays into all sorts of tall removal and he can only help you with bloodthirst in a single round. Here is a comparison with Crach:

As seen in the table above, its difficult to find many good reasons for running Arnjolf over Crach.
I asked my teammate and upcoming open participant, Alessio, what he thinks of Arnjolf and he answered the following:
“Arnjolf suffers a lot from what you could call “the monster hate”. Regular big boys being obviously strong in the meta, most decks adapted in order to shut it down (with the likes of Vanilla Geralt, Leo Bonhart or Geralt : Professional) ; and, sadly, Arnjolf’s 9 points body makes it a magnificent target for any of those remov’alls”

Its really cool design that Arnjolf plays himself on the battlefield. He synergizes with a lot of Skellige’s bloodthirst cards and it just feels good to play with him.