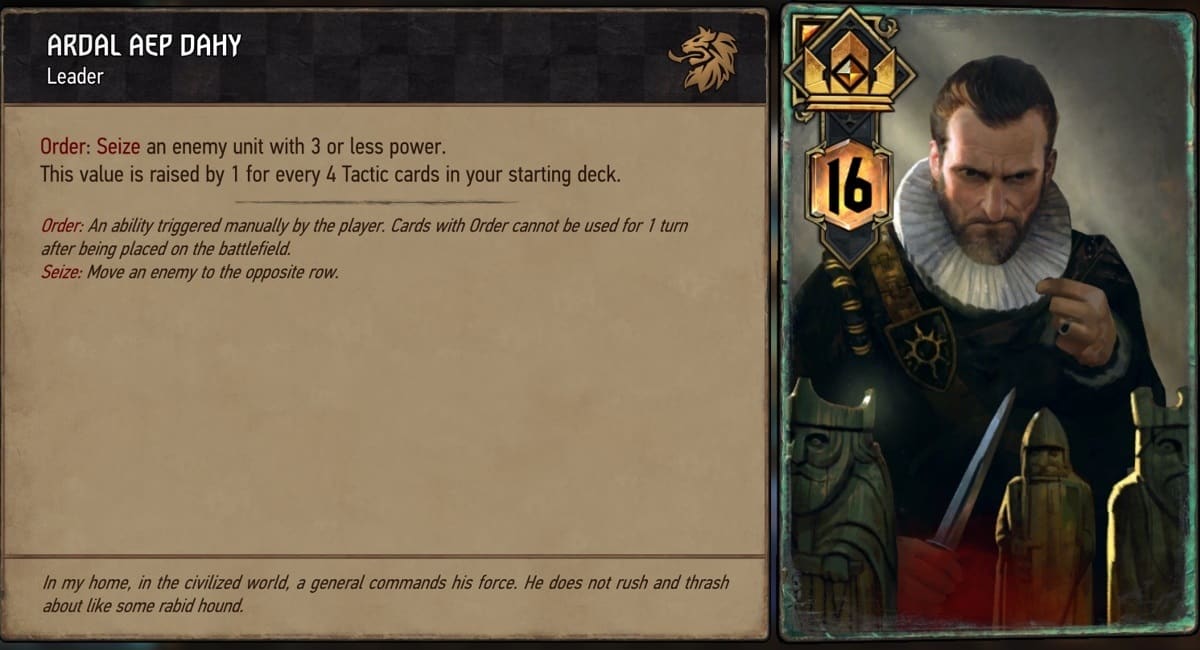 Leader: Ardal Aep Dahy
Ability: Order: Seize an enemy unit with 3 or less power. This value is raised by 1 for every 4 tactic cards in your starting deck.
Provision: 16
Description:

The latest patch in Gwent introduced five new interesting leaders.
Nilfgaard’s representative; the cold and calculated Ardal Aep Dahy. His ability is truly unique and at this moment not comparable to other leaders from a design standpoint.

So what can Ardal bring to the already bloodstained table of the empire?
Complete domination over the opponent! Including 4 tactic cards into the deck will empower Ardal’s ability by 1 point. Thus enabling him to steal 4 strength units from the opponent. So if you are able to steal a strategically important unit from the opponent, or an engine, the effective value you get from Ardal can be insane! Tactic cards like Muzzle and Assassination go hand in hand with the ‘join us or die’ strategy of this leader, however there are other options such as, Treason and Commander’s Horn. Unfortunately to empower Ardal even further you would need to run 8 tactic cards which at the moment does not seem easy or worth it, perhaps in the future as more cards are added to the game this will become a more viable option. Here is an example of how you could play Ardal…

This deck aim’s to control or steal the opponents engines, while still packing a fair amount of proactive value. Favours medium rounds, just long enough to get full value from Commander’s Horn or Vreemde.

Weaknesses:
Slightly unfavoured vs midrange decks. Lacks its own long round value, whilst being mediocre in short rounds.

Ardal’s place in the Meta:

Ardal is a strong leader, he will be super effective any time Meve is popular, and could be a legitimate tournament leader. On ladder however he suffers from the fact that his favoured match ups (engine decks) are not that abundant at the moment. But the meta can shift and new decks are always being discovered. I suspect it will take new cards being introduced for him to really shine.
Right now if we compare him to Morvran you get 2 less provisions and deck building limitations, so unless you can steal an engine or something significant, he will likely be slightly worse than meta Morvran decks.

I would boldly claim that none of the Ardal decks I have seen or played are tier 1, some would argue not even tier 2. All this being said he is still a solid pick in my opinion. I have had a lot of fun playing him, and I’m certain you can do well with him on ladder.

Design: 5/5 stars
The design is fantastic.