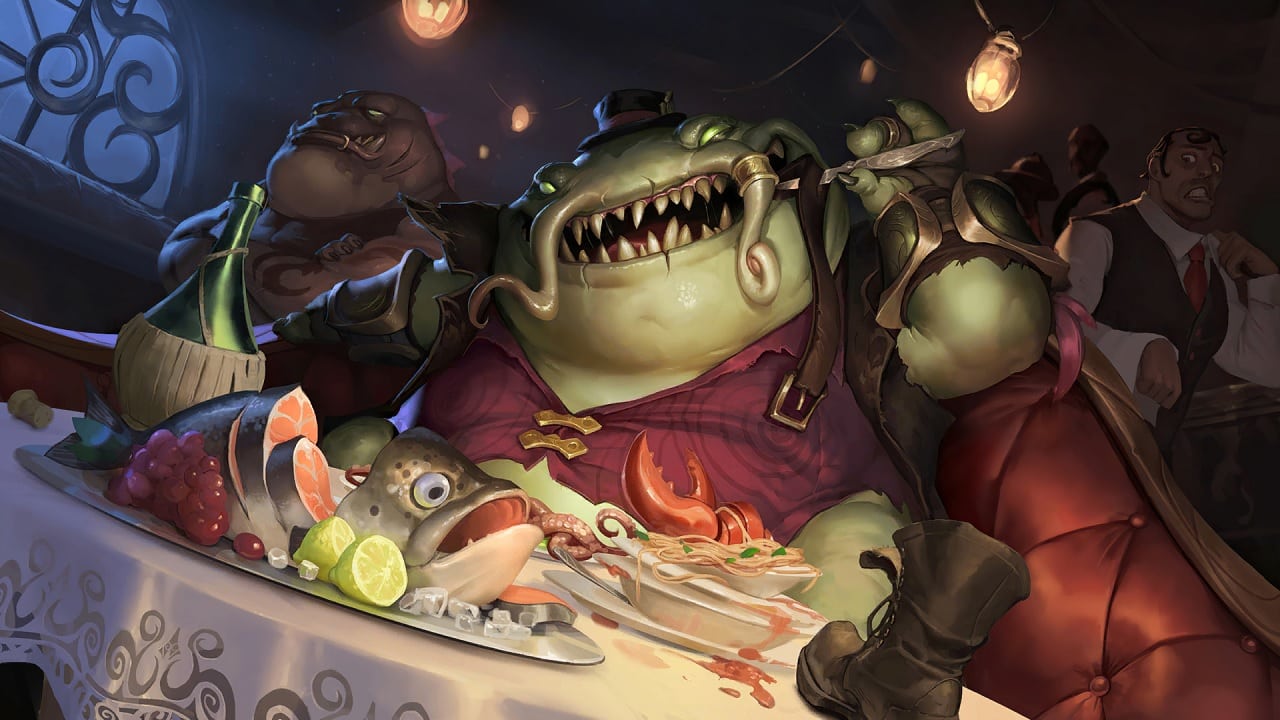 Welcome everyone! On Sundays, we usually release our meta snapshots where we discuss the meta decks and rate them. This week, we decided to do things differently. We wanted to give the community some fun decks to play that feature the new cards from the Monuments of Power expansion.

We tried our best to make the new decks as competitive as possible, but there’s only so much we can do with cards which have incomplete archetypes and decks that haven’t had enough time to be optimized.

If you have any questions, feel free to drop by our Discord. Best of luck on your climb!

Lee Sin (with the added pressure of Zed) is the star of this list, kicking his way through the opposition thanks to multiple spells which can protect him. Keep your Lee Sin alive, wait until your opponent lowers their guard, then strike them down with a Zenith Blade.

Nopeify! is the new addition to the dec, replacing the nerfed Bastion. It serves the same purpose in keeping Lee and Zed out of harm’s way, so that nothing can interfere with their OTK attempts.

Tahm-Soraka is a Midrange combo deck with the Star Spring landmark as its primary win condition. You generally want to curve out with your self-damage units like Crusty Codger, Boxtopus and Fortune Croaker, supported by healing cards like Star Spring and Guiding Touch to protect your board and get the maximum value from it.

Hired Gun and Shakedown are the removal cards of this deck. They allow you to force favorable trades and to manage the damage you take, helping to accelerate your Star Spring healing. Lastly, Hunting Fleet is a very important card in this list, because a 6/6 on Turn 4 is incredible. However, make sure to use it at the right time during your turn, as otherwise you’re giving your opponent a free Elusive unit with which they can immediately damage your Nexus.

Freljord’s Frostbite mechanics take advantage of the heavy presence of Lee Sin, stopping both the Dragon’s Rage and the actual damage of the leveled-up monk. The addition of Tahm-Soraka in this early meta makes for another great matchup for Ashe-Sejuani, since Reckoning and Culling Strike don’t discriminate based on health, but strength, which Tahm Kench won’t find to his liking.

Swain’s threat levels are off the charts, forcing removals and terrifying your opponents at the mere thought of him hitting their Nexus once. With many early game removal cards and the extra damage granted by your kegs, Swain will always be leveled-up. What’s more, you’ll have access to Swain in the late game thanks to The Leviathan.

GP-MF is an Aggro deck with the Nexus rush game plan. Jack, the Winner’s ability creates a free card which allows you to deal 2 zero-cost damage in the following turn while also enabling Gangplank. The list quickly approaches critical mass in terms of Burn potential. Every card represents some form of reach, which can be scary to play against.

Fast & Furious, this deck doesn’t have the time to play around. Throw away your whole hand and take advantage of the freebies on your Discard-oriented cards and hope for the best. With Draven as Dominic Toretto and Jinx as Leticia Ortiz, call your friends and start the race.

Vision serves as the nitro in your engine - get some and you’ll power up your cards. With this deck, it’s hit or miss, so get ready for explosive wins and very devastating defeats. 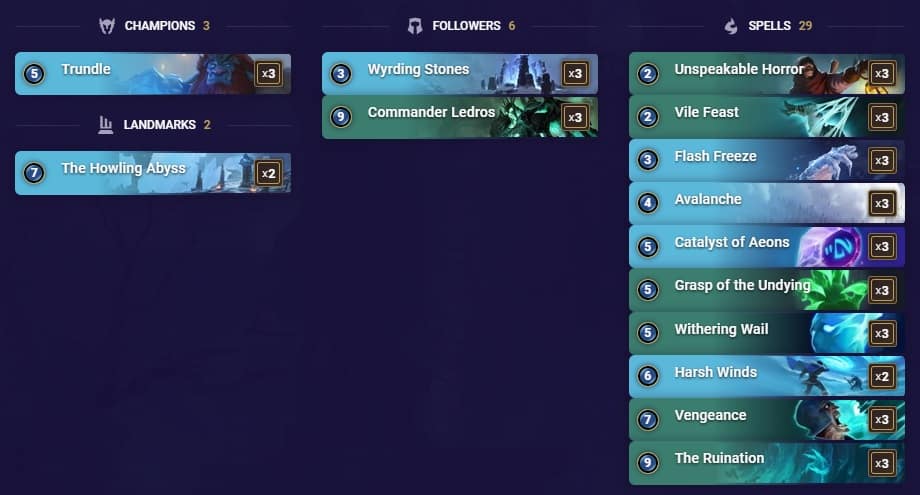 Trundle-Ledros is a control deck which excels at withstanding the Aggro decks which are dominating the meta right now. AoE board wipes like Avalanche and Withering Wail, together with healing helps this deck to survive the Aggro onslaught, but make sure to avoid keeping your win conditions (e.g. The Howling Abyss, Ledros) in your opening hand.

If you enjoy having explosive turns where you can jam tons of huge units, you should definitely play this deck! It aims to survive the early game with healing while working towards getting deep by tossing cards. Once you get there, you can stabilize the board with large Sea Monsters and put your opponent on the clock when Maokai levels-up.

The Slaughter Docks landmark performs better than expected, aiding your journey to going Deep and providing decent tempo if played when you are Deep. Would you like a Fresca? 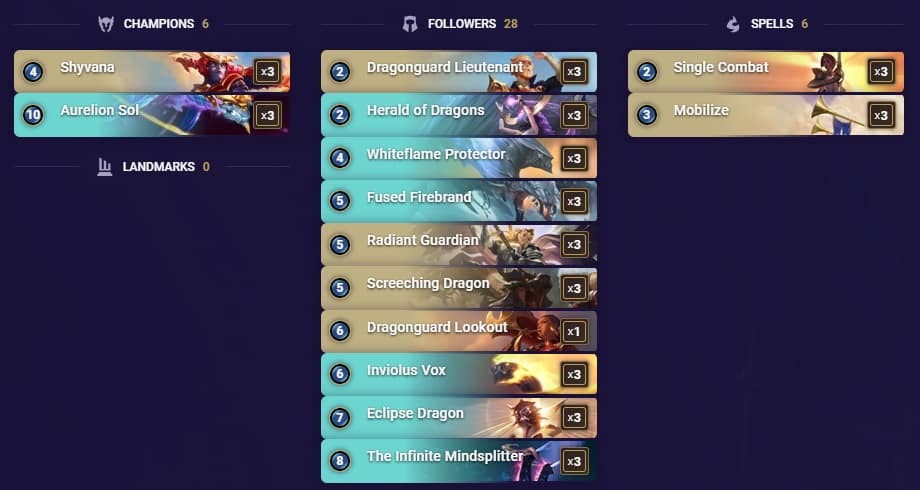 This list wants to ramp up with Herald of Dragons and Mobilize to get its Dragons out as quickly as possible. Playing your Dragons at a lowered cost allows you to maintain board control before finishing the game off with your stronger Dragons such as Eclipse Dragon ramping into Aurelion Sol. Single Combat is an amazing tool in this deck to activate Fury and deal with threats to survive the mid game.

Snoozebottom Elusives can be played as an Elusive deck or as a combo deck. Deal chip damage with Navori Bladescout, Greenglade Duo and Lounging Lizard, then finish the game by using Snoozebottom’s Mumblesprite on Jack, the Winner. Alternatively, you could also use Snoozebottom on Zed with Twin Disciplines for a total of 18 damage.

At its core, Tahm-Trundle is another Starlit Seer deck. It uses cheap spells to make use of Starlit Seer and grow your units. Utilize your spells to survive until Turn 6 or 7, then drop a a big unit to win the game with. Tahm Kench and Shakedown give the deck some staying power. This list is vulnerable to Warmother’s Call, as you have no answers to Vengeance and The Ruination, but it’s still a pleasure to play against Lee Sin or Aggro decks.

Tahm-Garen is a Midrange deck whose purpose is to outvalue the opposing board by continuously building up pressure. Bannermen, Cithria the Bold and Genevieve Elmheart are the usual suspects when it comes to doing this.

Tahm Kench plays the role of a Vengeance with a body, being able to swallow units whole and letting you maintain the board presence Demacia lists so desperately need. 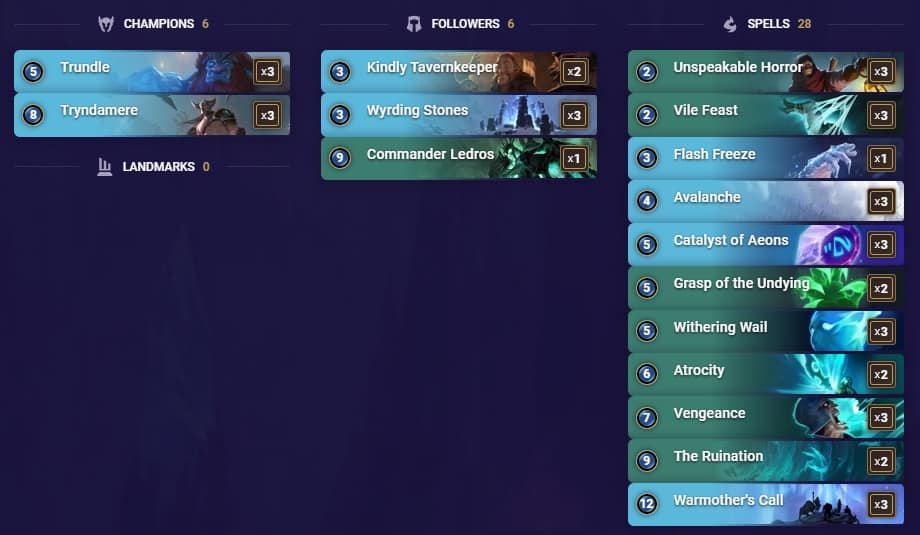 Ramping is trending, and who could make a better use of that than Warmother’s Call? This terrifying spell will overwhelm your opponent with big monsters, but it comes at a colossal cost of 12 Mana. Use your AoEs at the right time to survive the early game and let Trundle stabilize your board until the call is made!

Pressure your opponent with unlimited Fearsome Mistwraiths in the early game, then look to play Hecarim on Turn 6 and The Rekindler on Turn 7. Hecarim, Elise and Wraithcaller ensure you’ll always have a full board to attack with. If that’s not enough to seal the deal, The Harrowing should do the trick.