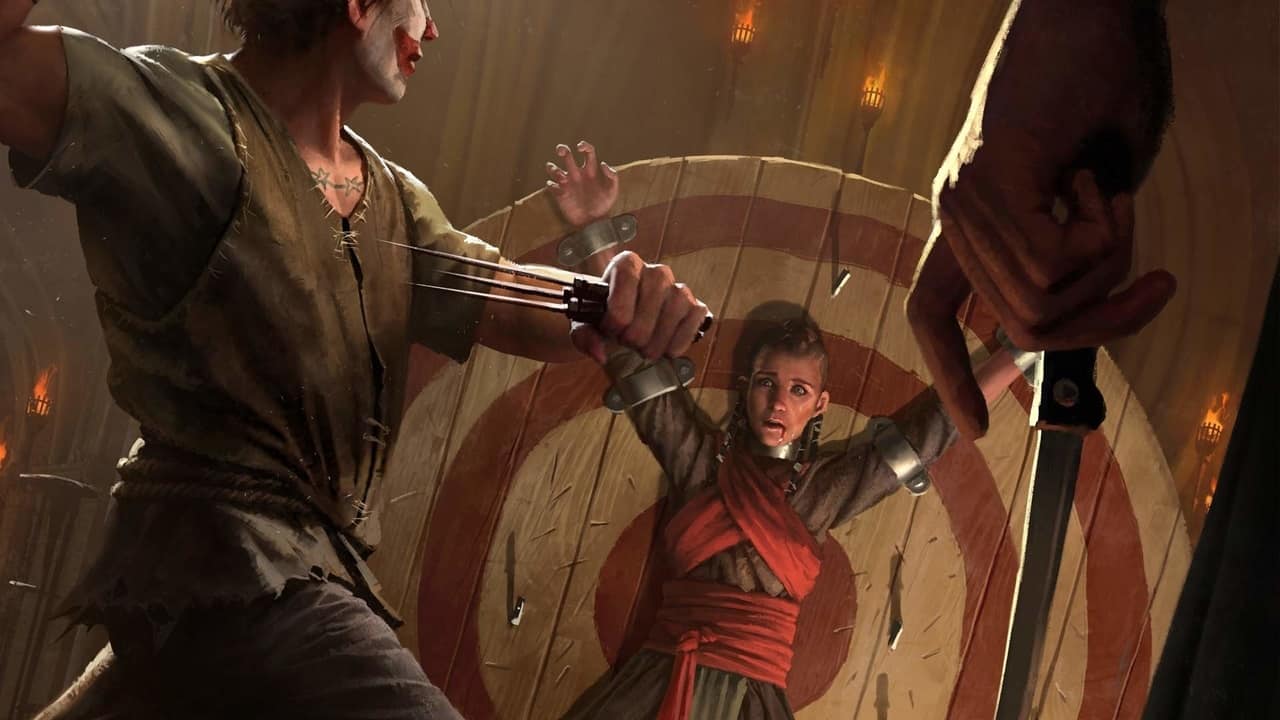 Hey everyone and welcome to our 6th meta report,

The Syndicate patch pro rank meta has settled down and so we are bringing you a grand total of 17 competitive decks.

Under each faction, you can find optimized decklists, their power rating and a brief summary of strengths, weaknesses and various considerations. If you have more questions, please join our Discord server: https://discord.gg/uSUSJZr

Enjoy the meta report and see you again when the meta shifts! -Wusubi

With the addition of Syndicate, King of Beggars has quickly become the Midrange leader of choice, granting more adaptibility than the other leaders. Always able to activate your coin-spender, combined with the Bounty package, you can completely decimate the opponent's board. While Gudrun plays for pure value and Whoreson focuses on direct removal, King of Beggars offers a versatile middle ground. Write-up by Spyro, decklist provided by wusubi.

- Due to his flexibility, King of Beggars can outvalue other Midrange decks

This list omits Sigi Reuven and combines a threatening swarm package with Intimidate engines and crime cards. Contrary to popular belief, this deck isn't easy to bleed, nor weak in a shorter round. It offers a massive burst of points with Sacred Flame and Helveed combined with leader. In a long round, you can rely on Novigradian Justice into Bare-Knuckle Brawlers and Portal into Lackeys. Write-up and decklist provided by Green-Knight and Pajabol.

- Resilient to a bleed, many ways of catching up and gaining card advantage

- Vulnerable to row punishment (which however isn't prevalent in the meta)

Whoreson can be considered as the perfect leader for a dedicated Bounty deck. While his leader ability can easily remove a crucial threat, he doesn't offer reliable access to coins. The majority of Whoreson decks thus depend on Royal Decree and Renew to play Sigi in two rounds. Write-up by OrphanTears614 and decklist provided by wusubi.

- As such, the deck is very flexible and can adapt to various round lengths

Gudrun has established herself as the overall greediest Syndicate leader, due to offering the highest value ceiling. Her leader ability directly enables the most powerful coin-spenders within the faction, on top of offering amazing synergy with Bincy and The Flying Redanian. Write-up by Andasama and Yangtse42, decklist provided by wusubi.

- Somewhat reliant on draws, you need coin-spenders and the Bounty package

- Tall removal, it's very difficult to avoid giving value to cards like Geralt of Rivia

With the release of Syndicate, Harald ended up cutting Olaf to play around Bounty. This deck is still very powerful in a variety of matchups and should be your first choice when playing Skellige. It offers a dominant mix of control tools and an incredible amount of raw points. Write-up by OrphanTears614 and decklist provided by Green-Knight.

- Even after cutting Olaf, Syndicate can outvalue you with their Bounty package

Svalblod can comfortably secure Round 1 in most matchups and then bleed his opponent. The added tempo from Roach will often allow you to win on even cards when going second. This playstyle makes Svalblod very annoying. Royal Decree was replaced with Renew to increase the value ceiling. Geralt of Rivia generally finds value and with Renew you can replay him in particular matchups. Write-up by Hippo and wusubi, decklist provided by BeardyBog.

- Similarly to Gernichora, you usually take control over the game in Round 1

- If you fail to win Round 1, some decks can outvalue you in a long Round 3

Crach is still a respectable control deck, capable of utterly disrupting most opponents. With the addition of Derran and Morkvarg, you have another proactive play at your disposal, making the otherwise reactive deck much better. Write-up by Andasama and Yangtse42, decklist was provided by wusubi.

- Can easily shut down various strategies, from engines to tall units

- Struggles with proactivity, unitless decks and Immune cards are a problem

- Carlo Varese for more tempo, Frenzied D'ao if you face too many artifacts

The inclusion of Novigradian Justice makes Brouver even stronger than he used to be. On top of having an extra proactive power play, Cleaver's Muscle represent two extra shielded bodies for The Great Oak, while also helping you with thinning Volunteers. Brouver still relies on Milva and The Great Oak in long rounds, but also packs a few very potent short round plays in Sheldon Skaggs and Vrihedd Brigade. Write-up and decklist provided by Pajabol.

- You can have a hard time on blue coin, as a lot of your cards are low tempo

Francesca has a low amount of provisions, but one of the best leader abilities in the game. With the addition of Novigradian Justice, she now has another powerful special card to use. This build focuces on achieving as much value as possible from Harmony. The deck has a superb long round due to Water of Brokilon and The Great Oak. Francesca's leader ability offers you a great shorter round, where you can use her to replay Novigradian Justice, making her "at least" a 10 point leader. Write-up and decklist provided by Pajabol.

- You never struggle with proactive plays and outvalue other proactive decks

Eithné is still a decent control deck, but her main weakness is Syndicate. If the meta is short on it and heavy on other factions, Eithné can be a great leader. 168 provisions is a lot to work with, granting you plenty of room for various meta adaptations. Write-up by SirLoathing and wusubi, decklist provided by BeardyBog.

- Similarly to Crach, very oppressive on red coin, especially due to carry-over

- Eithné is awkward on Blue coin, your cards are either reactive or low tempo

This consume deck grants you a higher value ceiling than the usual Arachas. Since it gets extremely greedy with Portal, artifacts and Caranthir to support Dettlaff, some of your threats will often go unchecked. Kikimore Warrior is a nice addition, offering another potent engine. Write-up by Shadowplayred, decklist provided by Green-Knight.

- When your artifacts and/or engines stick to the board, you just win the game

- Crones, Glusty and Dettlaff: Higher Vampire can carry the game on their own

- If you fail to secure Round 1, you're prone to being bled due to the artifacts

- Very difficult to pilot properly, especially because row limit is an actual issue

- If you run into too much artifact removal, consider playing the Pugo version

Another decent take on Arachas would be ignoring the artifacts entirely and throwing in Pugo, Griffin and Ozzrel. This variation still utilizes the Dettlaff package and Crones, resulting in a very respectable Midrange mix that will usually generate too much raw value to handle. Write-up by Shadowplayred, decklist provided by Green-Knight.

- This deck is more flexible, resilient to a bleed and doesn't have to win Round 1

- Every card can play above the curve, resulting in a very potent pointslam deck

- With the inclusion of high base power units, you're more vulnerable to Bounty

- If you don't see a lot of artifact removal, consider playing the artifact version

The addition of Pugo Boom-Breaker breathes new life into the Big Monsters archetype. Due to high-end removal, Thrive engines and tall units, Gernichora can consistently pressure the opponent and take control over the game. This allows you to choose a favorable length of Round 3. Write-up by SirLoathing, decklist provided by BeardyBog.

- As a deck reliant on Dominance, Gernichora always plays into tall removal

- One Drowner → Wyvern if you don't face a lot of Syndicate

- Naglfar → Old Speartip: Asleep for more power at the cost of consistency

Foltest can utilize Draug in the most effective way. He also has the best removal options within the faction, which can be crucial in the current meta. If you get your combo and manage to create multiple Commando's in Round 1 and then shuffle them back with Pavetta, you're pretty much playing a Tier 1 deck. The main reason why this list fares a lot better than the greedier "full Commando" version is because rather than trying to improve the chances of getting the combo suboptimally, it tries to increase your chances of winning when the combo doesn't work out. It also focuses on dealing with the Round 2 bleed. Greedy and often ineffective cards such as Operator, Circle and Necromancy were replaced with Saesenthessis, Anséis and Eyck. Write-up and decklist provided by Green-Knight.

- Poor opening hand can make the first round difficult, especially on Blue coin

- Muzzle, Philippa and decks that can bleed you without going tall (e.g. Crach)

This greedy version of Henselt plays Portal, Roche and Hen Gaidth Sword, giving you enough highroll potential to have a chance against the meta. But if you're seeing too much removal on the ladder, we suggest playing Foltest.

- When you highroll on Vernon Roche, you can sometimes win a match

- Weak against majority of decks in the meta, most notably SY and SK

With the meta currently favouring leaders that rely on their leader abilities to execute their game plans, we have witnessed the swift rise of Usurper. On top of rocking the sexiest bald man look thanks to his correct head shape, Usurper can grant you some free wins due to having a few favoured matchups. Despite having 7 fewer provisions to work with than Jan Calveit, you can easily compensate for it by cutting the infamous Roach and Assire combo. The power of Shupe alone can often tip the scales in your favour. Write-up and decklist were provided by wusubi.

- Good matchup vs popular leaders such as Gudrun, Harald, Crach and Arachas

- Scoia'tael can be a difficult matchup, especially when you don't draw Shilard

- Like any NG deck, Usurper is draw dependent and your bronze cards are bad

Pajabol's creative variant of Emhyr Midrange combines the control offered by Muzzle, Sweers and the witcher trio with proactive points provided by the soldier package. This makes the deck very flexible and it also allows you to get more value with Emhyr's leader ability than usual. The nerf to Gimpy Gerwin certainly made this deck better, however Syndicate can obviously be a serious problem. Write-up by Spiderchicken9, decklist provided by Pajabol.

- Flexible game plan, can adapt to multiple strategies and various round lengths