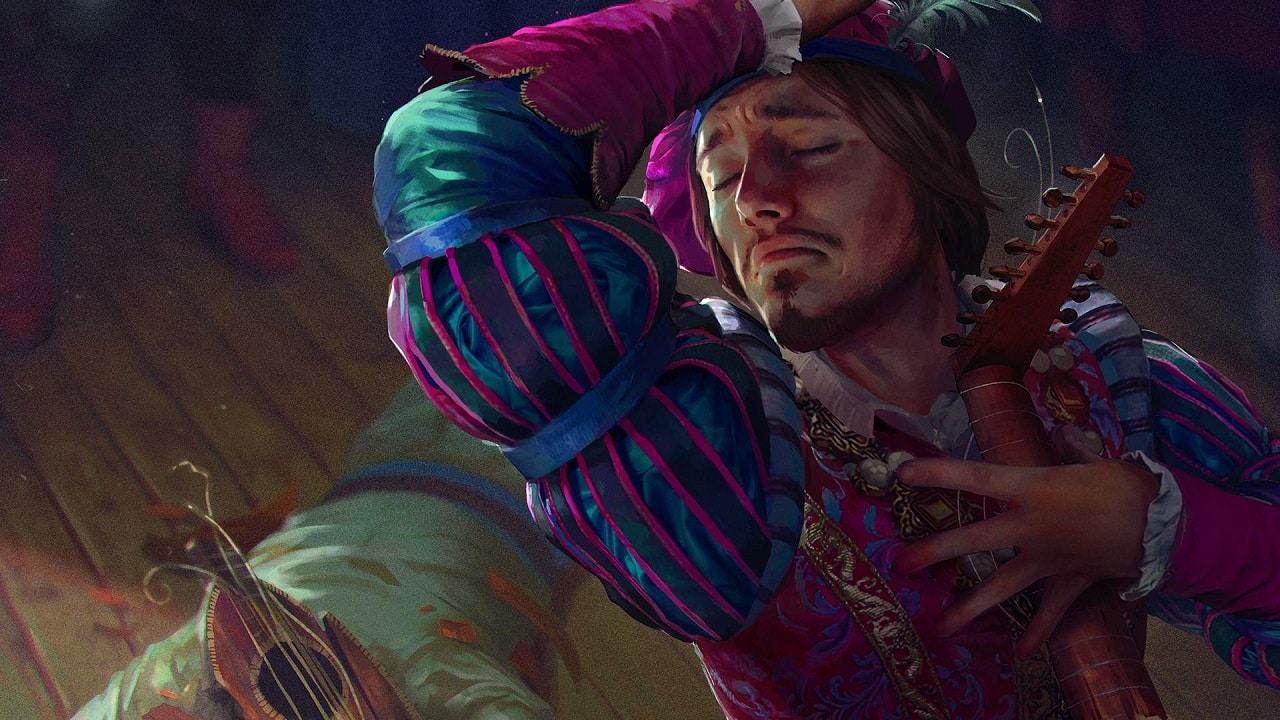 The Season of Love is finished and with that, we’re back with another in-depth overview of what happened. In addition to an extensive balance patch in 8.2, we also saw the first two qualifiers for Gwent Open, which we can from now on expect to have an impact on the meta. With the exception of Kolgrim and Ciri: Dash, the meta seemed to be in an overall much healthier place this past season.

With the pleasantries out of the way, let’s look at the general overview: 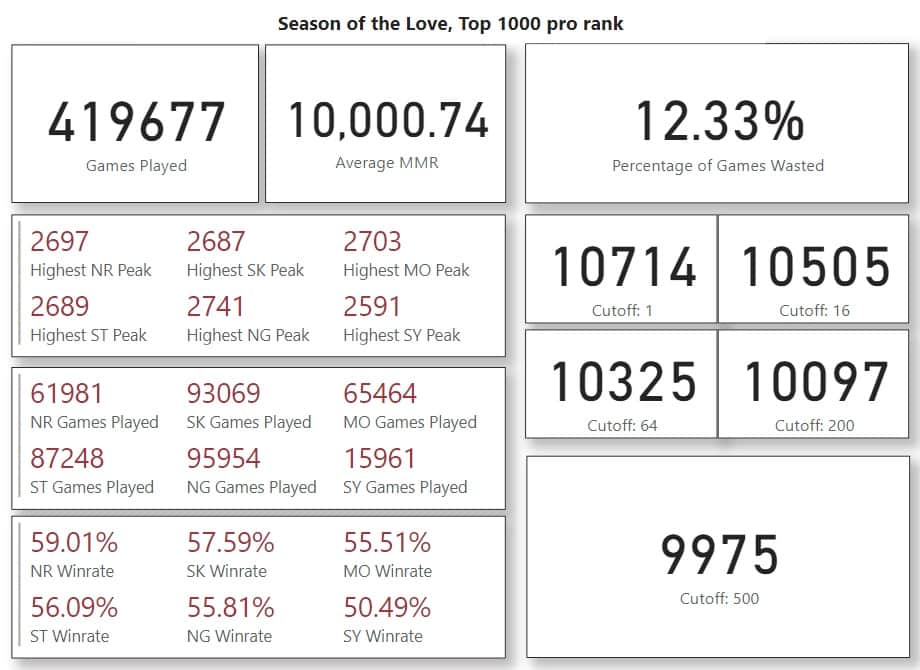 As you can see, in a span of only roughly 4 weeks, the Top 1000 players of Gwent played just under 420,000 games, which is an average of approximately 420 games per player. This is about 15 games played each day for every player. Assuming an average of 12 minutes per match, this means that a Top 1000 Gwent player put (on average) 84 hours into the game this season and just over 3 hours per day.

Next, we have the faction highscores and their accompanying names:

Now let’s talk about wasted games. These are the games played that didn’t contribute to a players’ Top 4 fMMRs (i.e. those with their 5th or 6th factions). Using the 12 minutes per match average gives a rough estimate of 620,964 minutes wasted, which is about 431 days’ worth of playing Gwent gone down the drain unless you enjoyed playing SY for whatever reason.

The rest of the data is pretty self-explanatory and we will be going over it in detail down below. 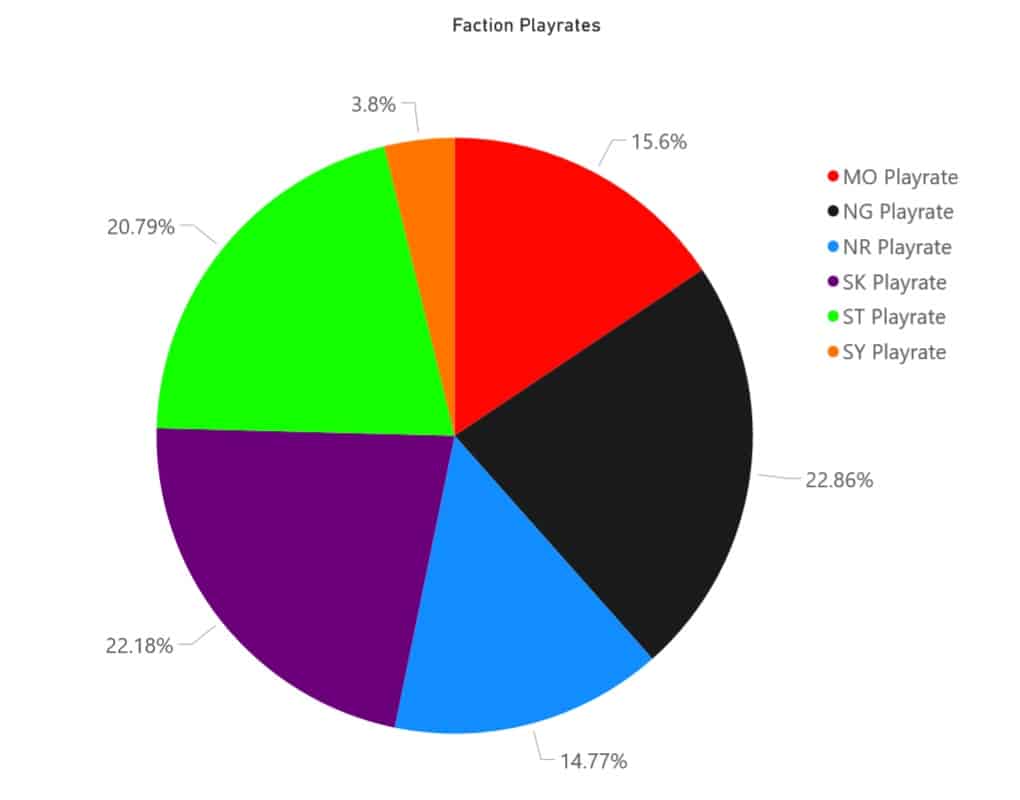 As you can see, NG was the undisputed king of playrates this season. Various archetypes were played with a multitude of leader abilities, although the favorite was Lockdown by far. Viper Witcher Mentors received an uncalled-for buff with their Adrenaline condition, which meant that Kolgrim decks sailed through strongly into the Season of Love.

The changes to Bombs made double Madoc (utilizing Letho: Kingslayer) a much more viable option than almost anyone would like to think. Masquerade Ball was the oddball this season, as many players deemed it unfit for a meta without Viy. SK and ST also saw a lot of play last season, collectively making up about 66% of the ladder combined with NG.

Speaking of buffs to Bombs, this led to more experimentation with SK and ST. It stuck with the return of Precision Strike and surprisingly also with SK after Tailbot won the Top 16 qualifier with his Blaze of Glory deck.

NR was arguably the most efficient faction to climb with last month, which can conceivably be linked to its playrate not being as high as one might expect. MO was seeing some play here and there with Carapace, although approaching the end of the season more and more players seemed to be climbing on the Arachas Swarm train. Lastly, we have SY at 3.8%.

Next, we will take a look at faction winrates and PAT4Fs (popularity amongst Top 4 factions): 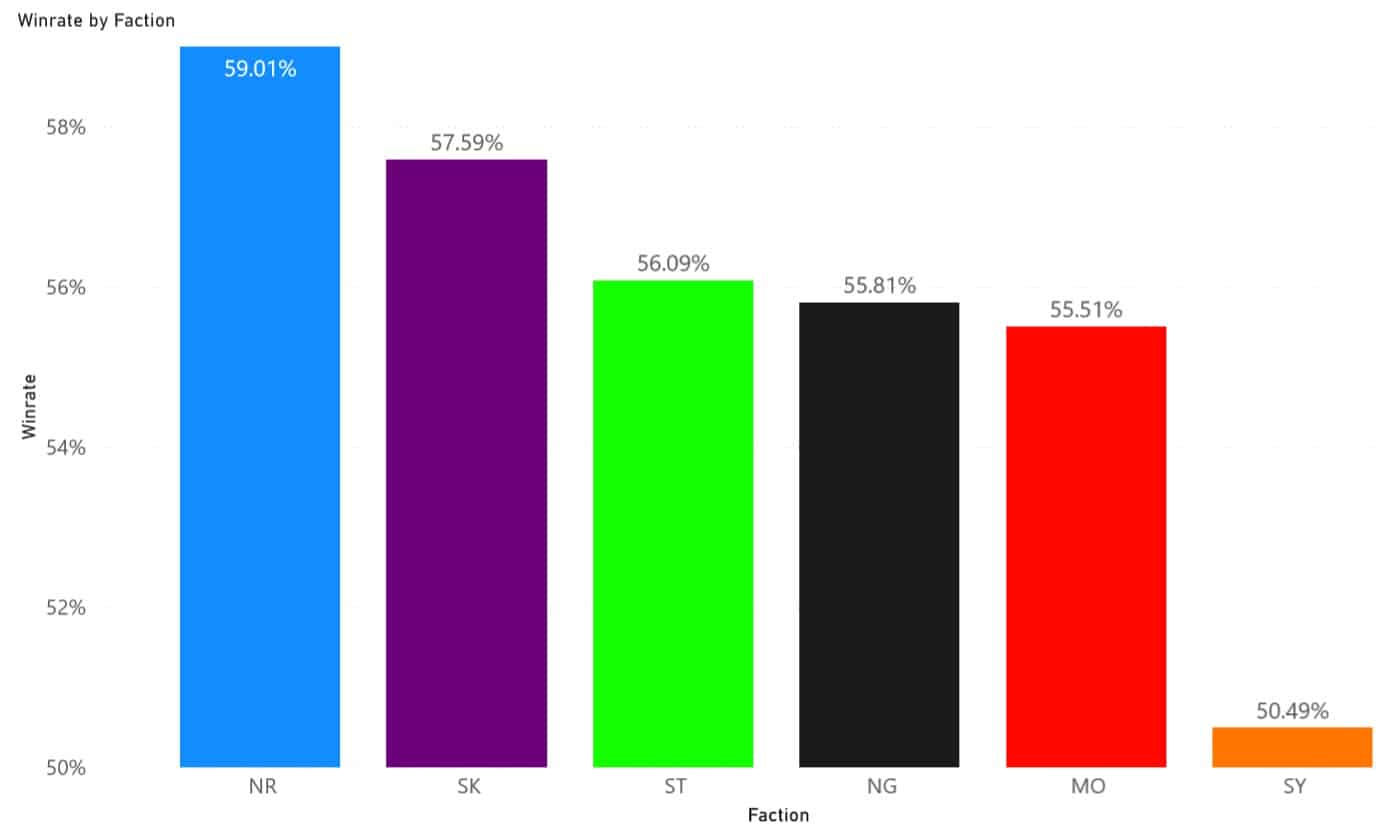 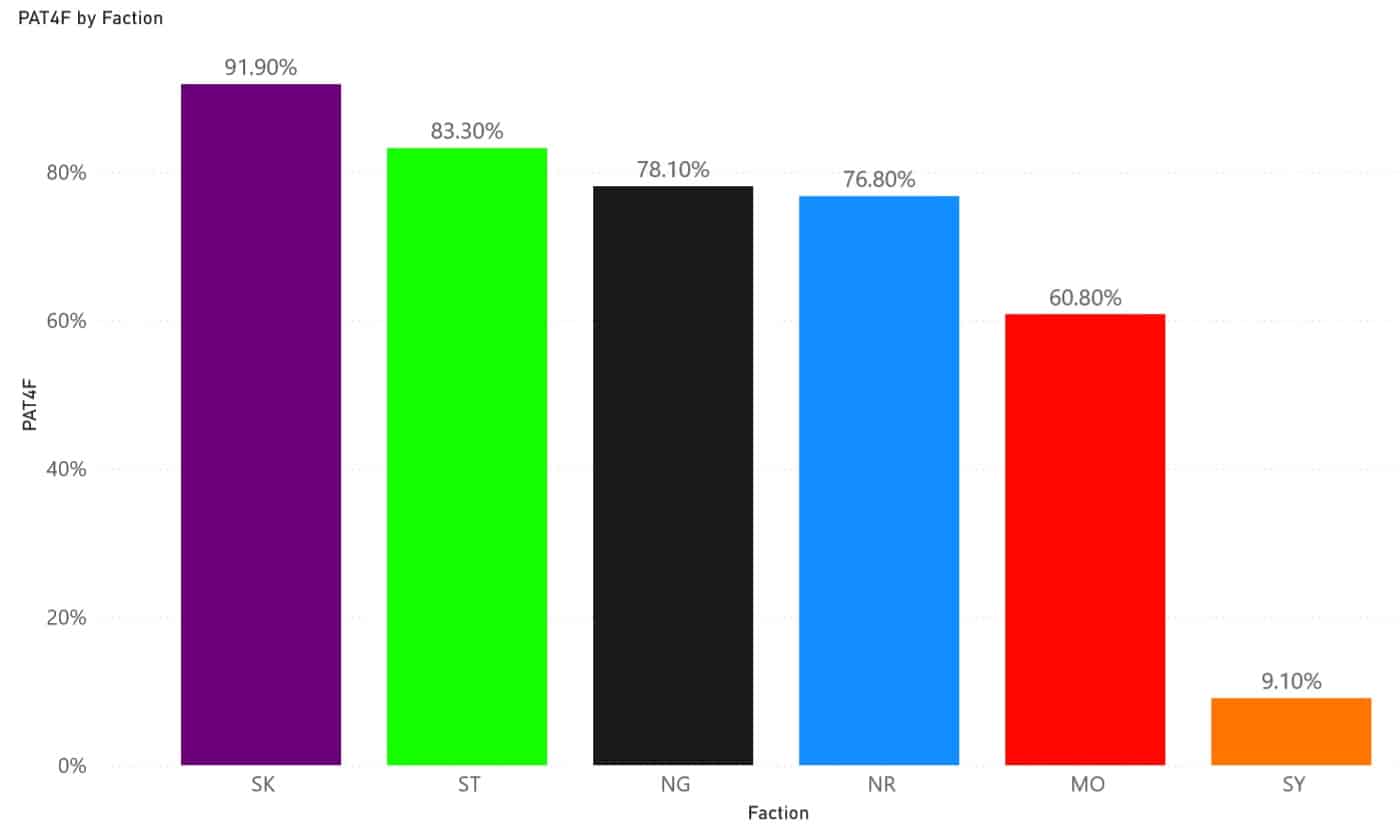 NR had a mindblowing winrate of 59.01%. The straightforwardness of Witchers combined with its sheer power made NR an appealing faction to climb with last season. With the change to Margarita, most players swapped Berengar out for her, making the deck more resilient to “unexpected parameters.”

Near the beginning of the season, SK was almost exclusively Ursine Ritual Warriors. As time went on, we witnessed several spins on Warriors including Patricidal Fury and Reckless Flurry. However, the best scores towards the end were achieved with different variations of Tailbot’s control deck utilizing Blaze of Glory with Madoc and Witcher cards. The faction seems to be consistently performing well, a quality which is backed up by its extremely high PAT4F at 91.90%.

While the majority of ST decks consisted of Elves, be it engine or pointslam versions, ST also saw some variety last month. Guerilla Tactics, Nature’s Gift and Precision Strike were all seeing some play in a variety of decks at the top of the ladder. The faction enjoys a high 83.30% PAT4F, standing right next to SK in both PAT4F and winrate.

As mentioned earlier, NG was the most played faction with a variety of decks that were piloted to high scores. The faction had the highest peak MMR at 2741, achieved by Mya-Mon369EX, who used an Imprisonment deck with Madoc, Kolgrim and Letho: Kingslayer.

Despite its high playrate, NG’s winrate still looked decent at 55.81%, only being held back as usual by its lack of consistency with regard to Masquerade Ball decks and the somewhat binary matchups experienced by Kolgrim decks.

MO had two competitive archetypes. The first was Carapace with Keltullis and Ciri: Dash, which easily beat two of the most prominent decks in NR Witchers and SK Warriors. The second was Arachas Swarm, a happy discovery that happened later in the season and took the meta by the storm thanks to its low-to-the-ground pointslam.

The changes to Luiza and Kurt sadly weren’t enough to bring back either the good ol’ Bounty deck or the engine-overload version with Hidden Cache. However, the rework to Novigradian Justice turned it into a much better card for Congregate, meaning Firesworn saw some play.

Let’s take a look at how each faction performed in the average MMR department: 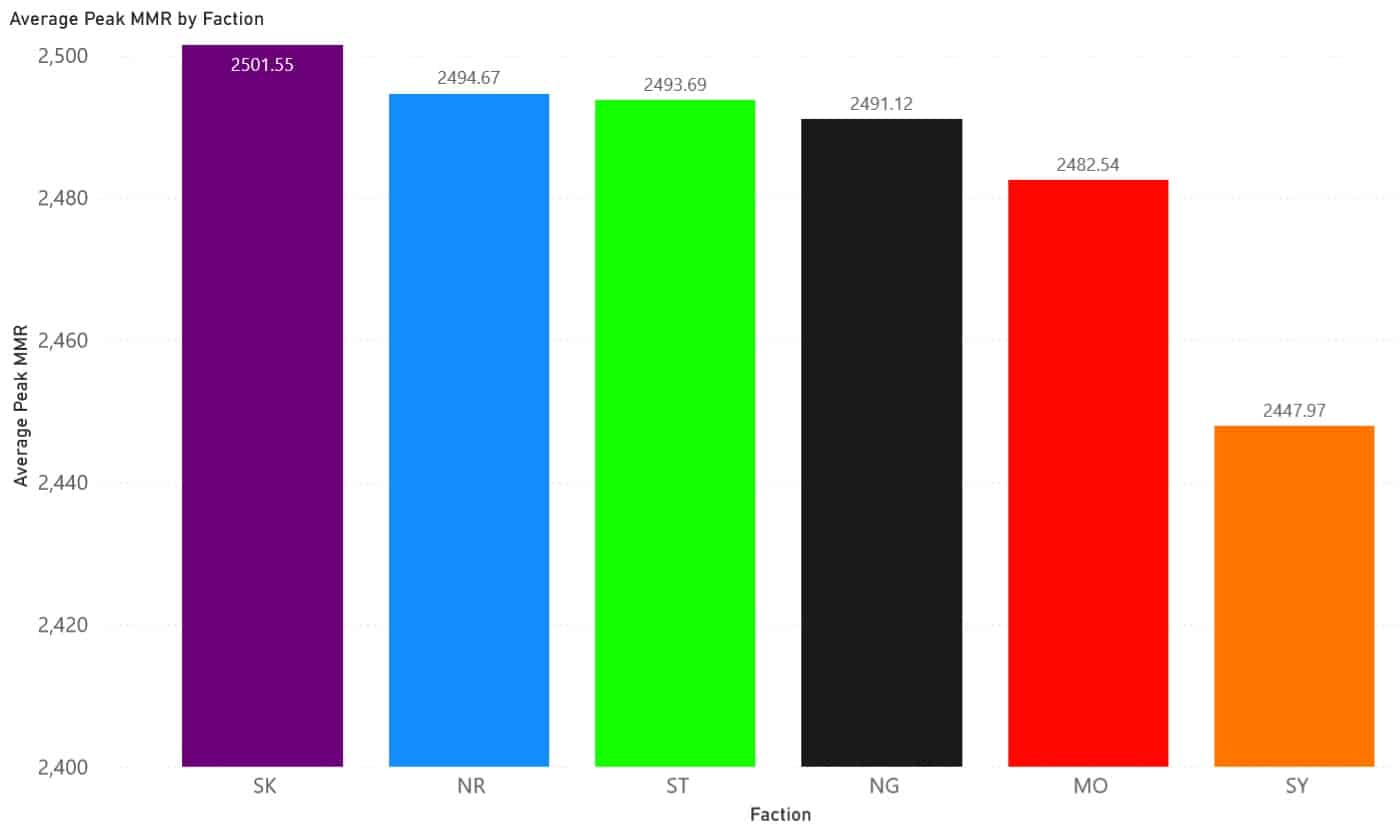 Keep in mind that these averages were calculated only for the players who had actually finished their placements for the respective faction, meaning that the peak score of a player who played 10 games with SY, for example, wasn’t factored into the Average Peak MMR for SY.

SK and NR came out on top of Average Peak MMR with 2501.55 and 2494.67 respectively, owing much of their success to the fact that both Warriors and Witchers seemed to enjoy the dangerous combination of an extremely straightforward game plan with serious power.

Here we can see what the “crème de la crème” of Gwent have been up to. The charts down below represent only the stats for the Top 32 players, giving us further insight into what the professional players decided was worth playing. 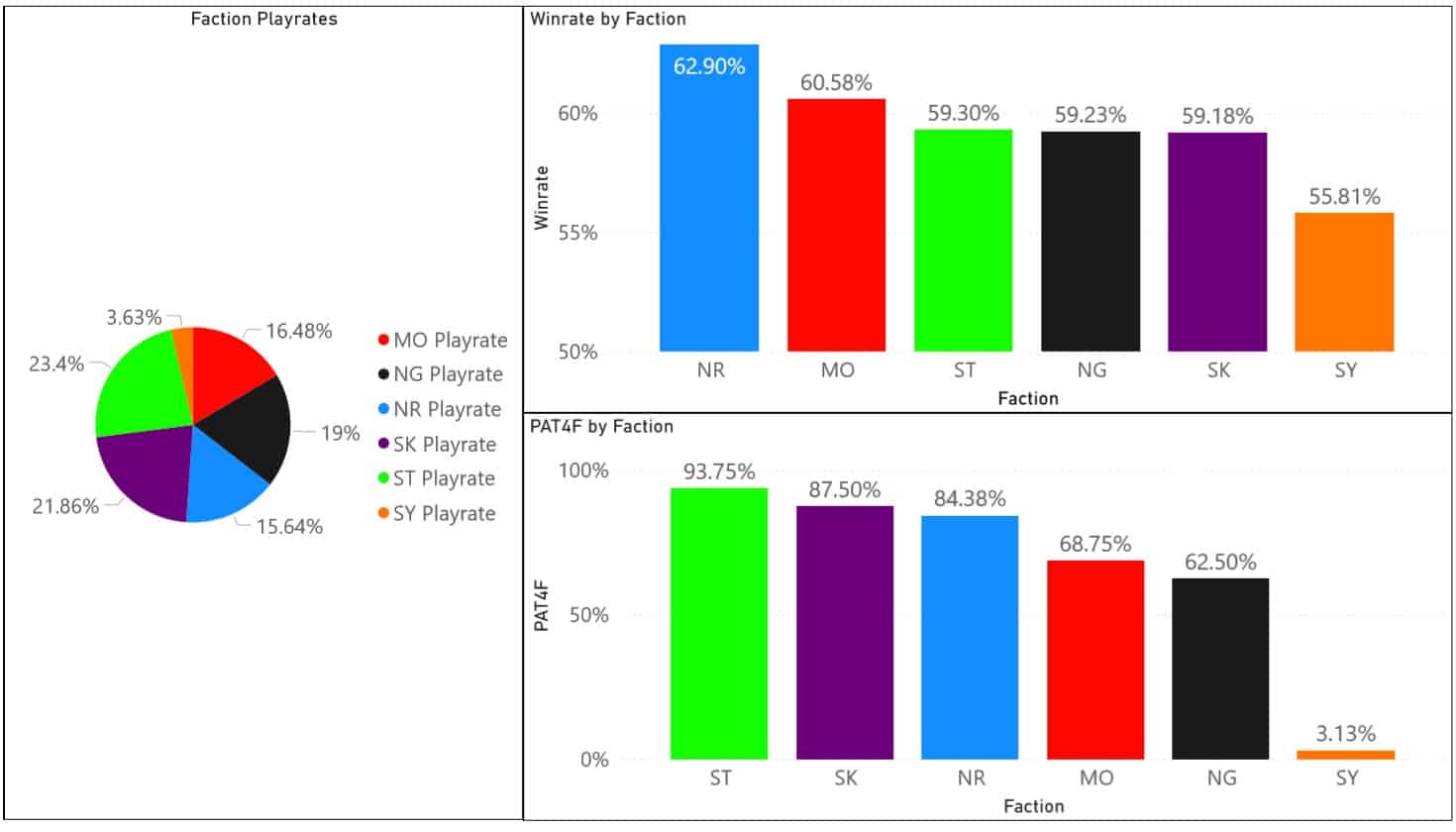 As we can see, MO and ST have a higher winrate here than in the Top 1000 stats. This indicates that while SK had the 2nd highest PAT4F, it performed worse than NR, MO and ST, as demonstrated by the winrates.

In the higher echelons of pro rank, Carapace seemed to be the weapon of choice for many players due its great matchups into NR Witchers and SK Warriors, both of which were very prevalent. Moreover, Arachas Swarm became a useful pick to greatly reduce the value of opposing tall punish, while also having some free matchups thanks to including Geralt: Yrden.

As a result, MO seemed to have a lot of flexibility if you knew which deck to play and when to do it. All of this explains MO’s 2nd highest winrate.

Only 3 players out of Top 32 didn’t have ST in their Top 4 factions, which speaks volumes to the reliability of ST. We put this down to its high flexibility and refinement in deck-building terms across different archetypes. For instance, kams134 with Nature’s Gift, Pajabol with Deadeye Ambush and Redrame with Precision Strike all reached incredibly high scores using completely different ST decks.

Next up, and my personal favorite section, let’s take a quick look at who the most efficient Gwent players were last month. Starting this month, we will be using LEI as the measure for efficiency. For more information about LEI, you can refer to lerio2’s article on LEI here.

Keep in mind, however, that wasted games (those that didn’t contribute to a players’ Top 4 factions) were discounted in these calculations and only the players who finished in the Top 64 were analyzed. 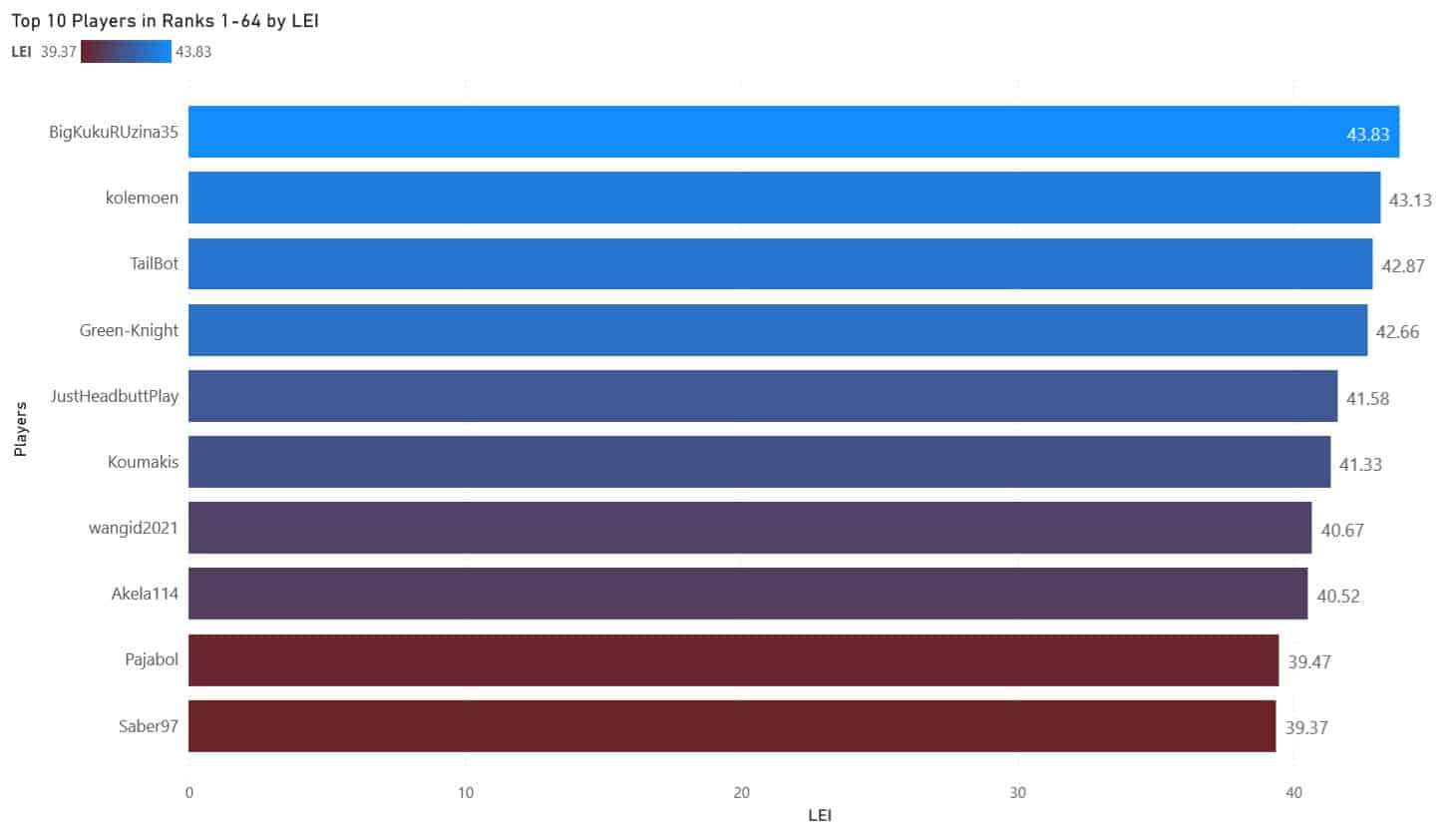 A new addition to this month’s overview, partially due to the high demand, is the daily stats. Down below you can find the day-by-day stats for every faction. You can look for spikes in stats after certain decks were popularized either by streamers playing them or after the Gwent Open Qualifiers took place! 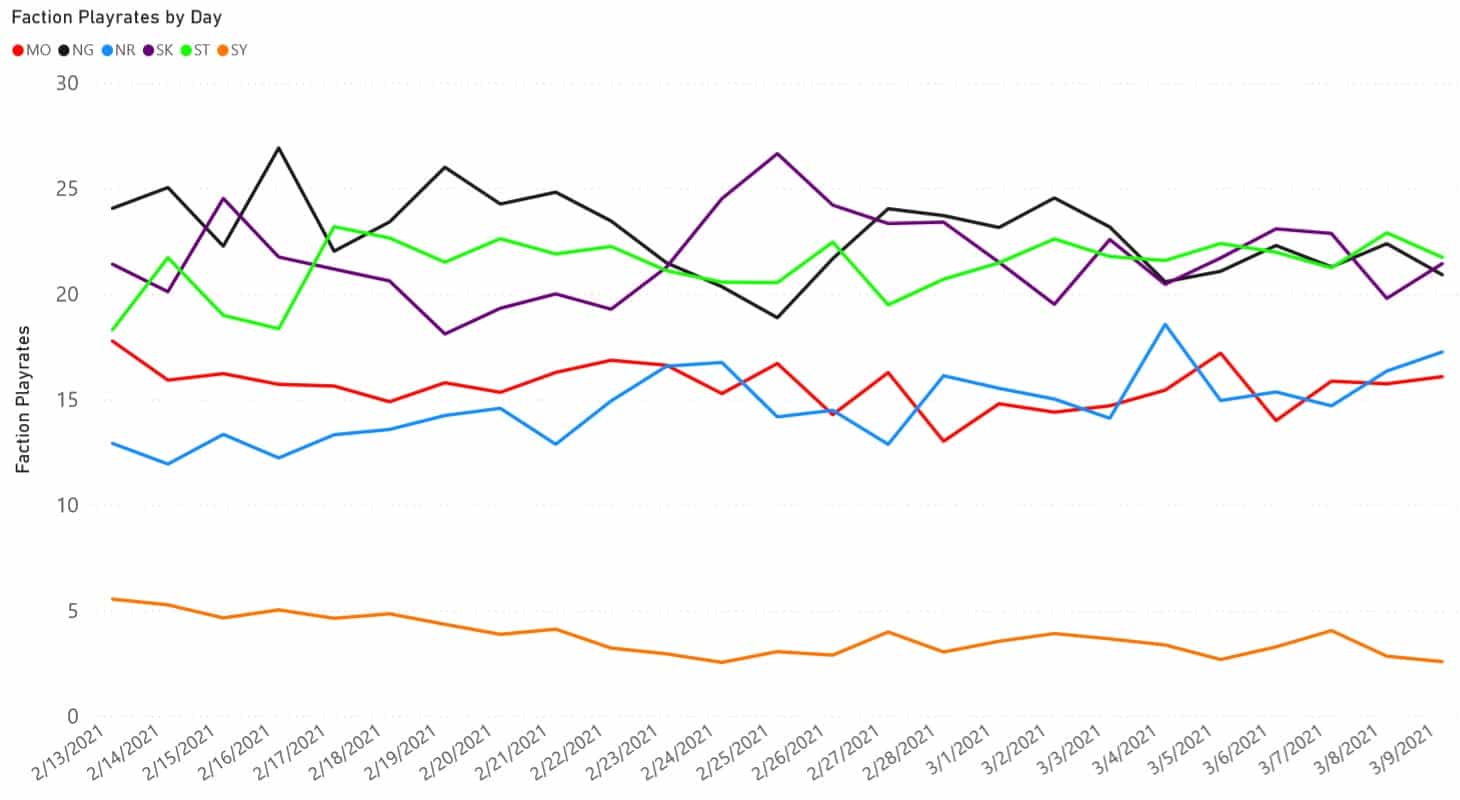 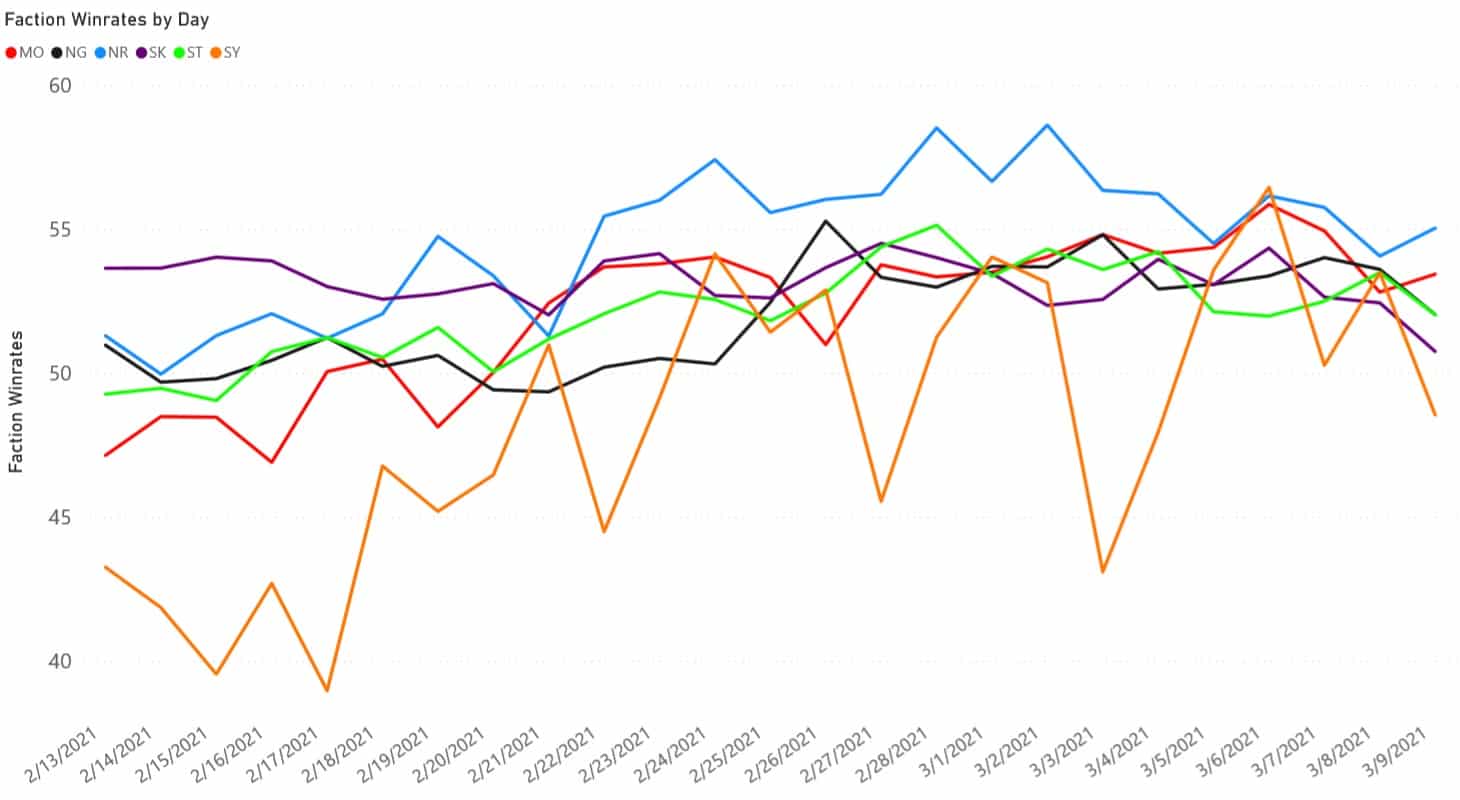 As a bonus, here are some interesting graphs to look at. See if you can find yourself in the “MMR and Games Played” chart. If you have any suggestions about other stats that you would like to see, you can join our Discord and let us know! 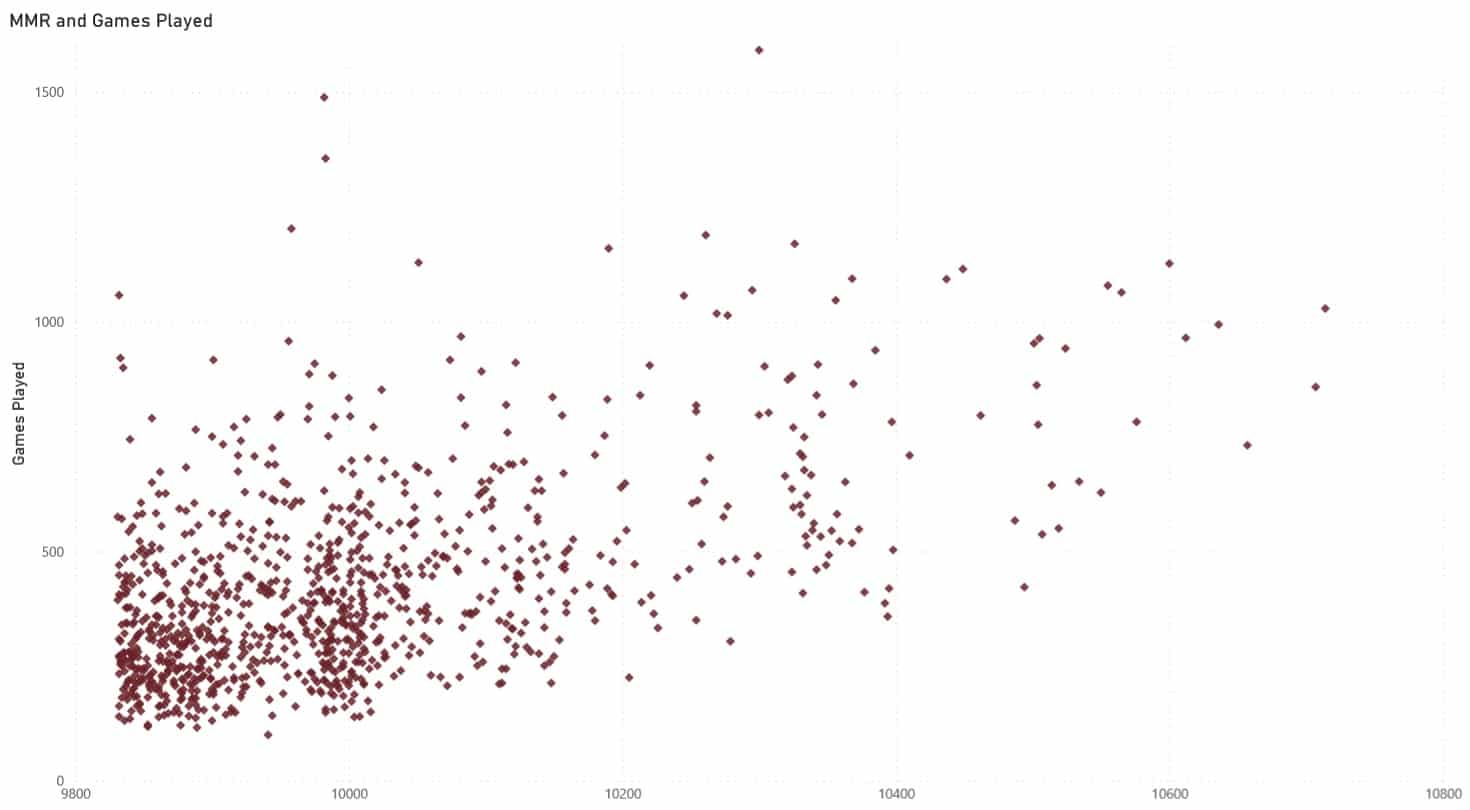 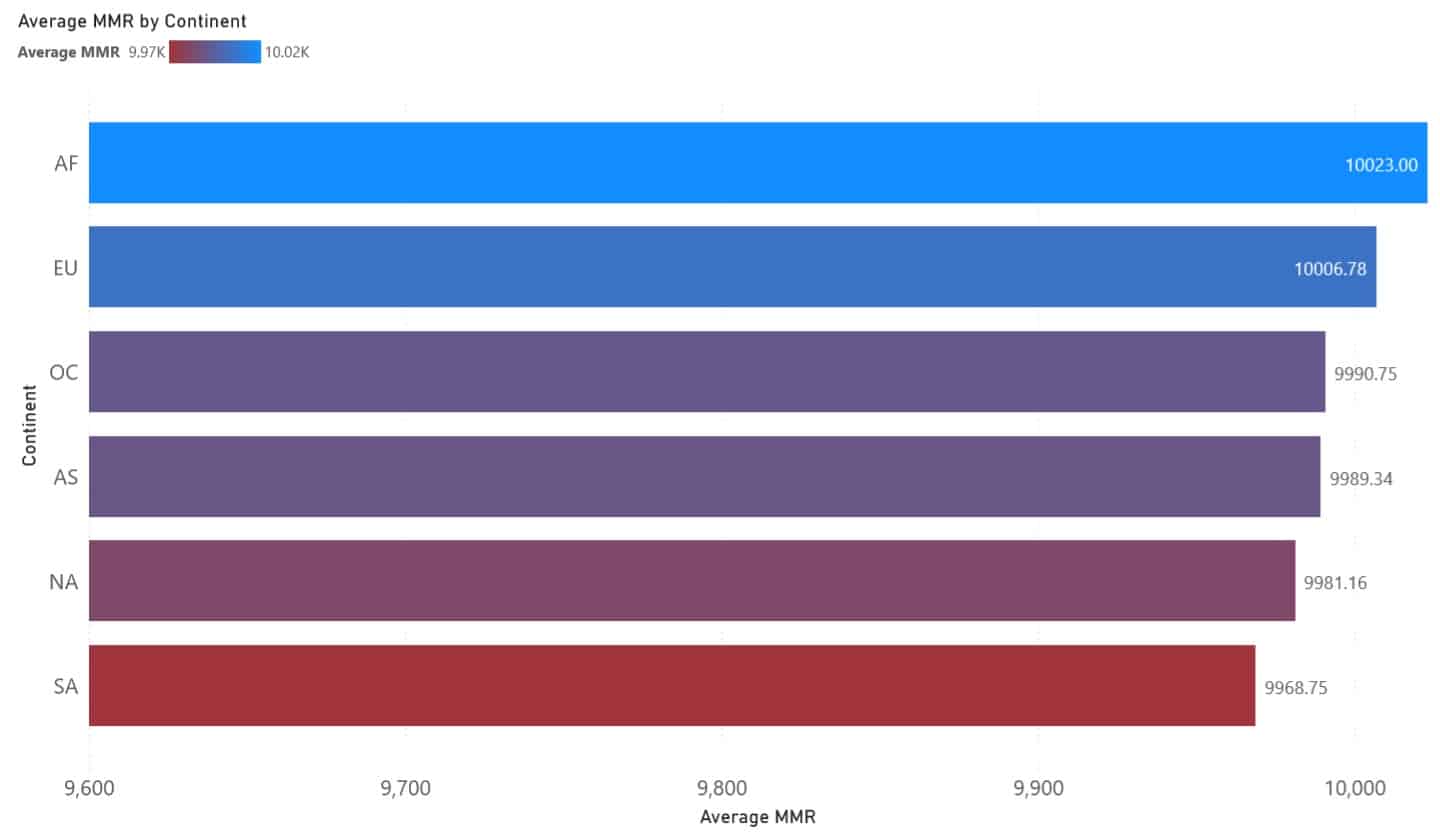 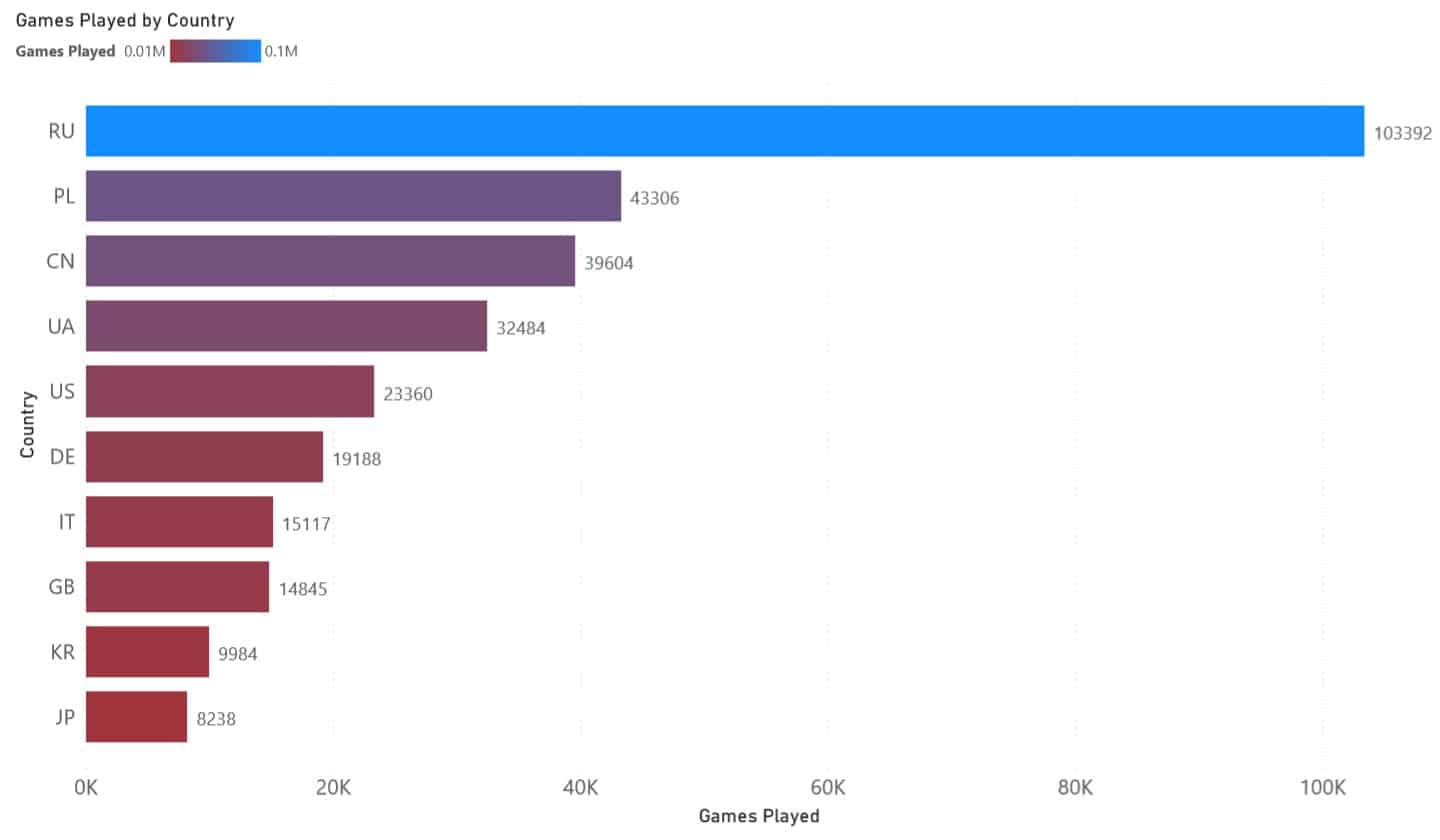 All of the graphs represent cumulative stats of the Top 1000 players in Pro Rank and were acquired in the transition time between the last season and the current one to give the most accurate data possible.