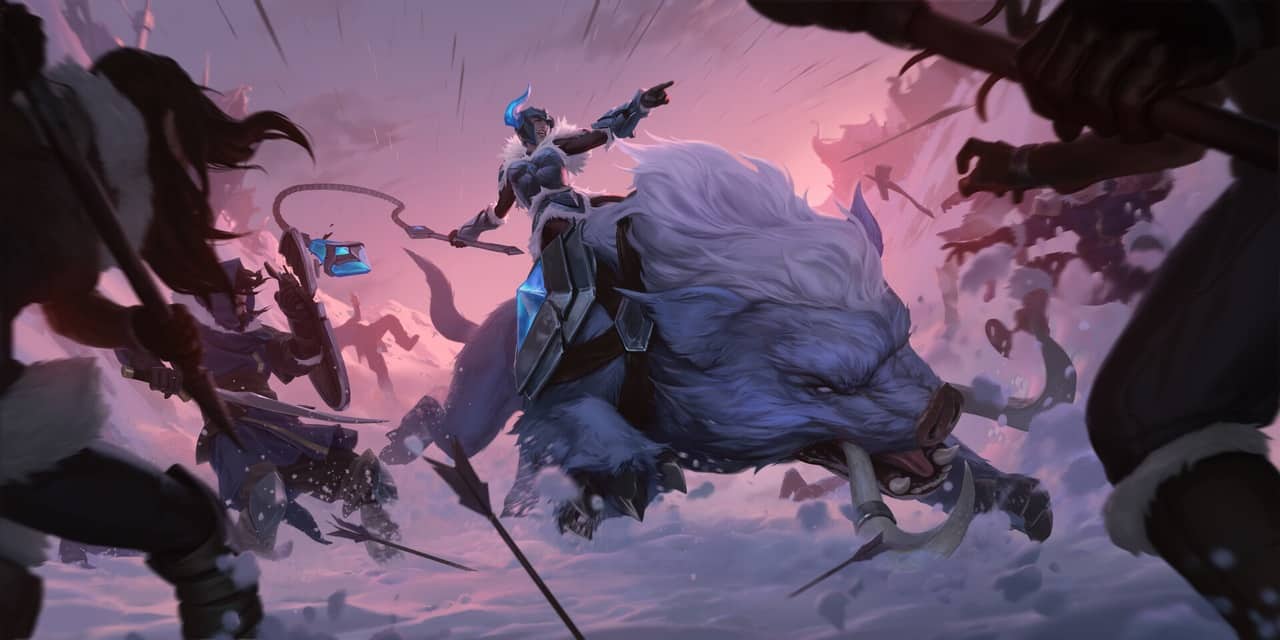 Welcome to TLG’s sixth meta snapshot for Legends of Runeterra, a series in which we give you our insight on the most represented decks in the higher ranks of ladder.

Even though many people still don’t take the ladder experience seriously and use Master Rank as a playtesting ground for their personal brews (a situation which will most likely last until Riot Games starts bringing changes to the MMR system), some decks have seen their popularity soar this week.

Freljord, despite being considered one of the weakest regions, is still widely represented in the meta, and Sejuani decks specifically almost make up a third of the lists featured in the snapshot. 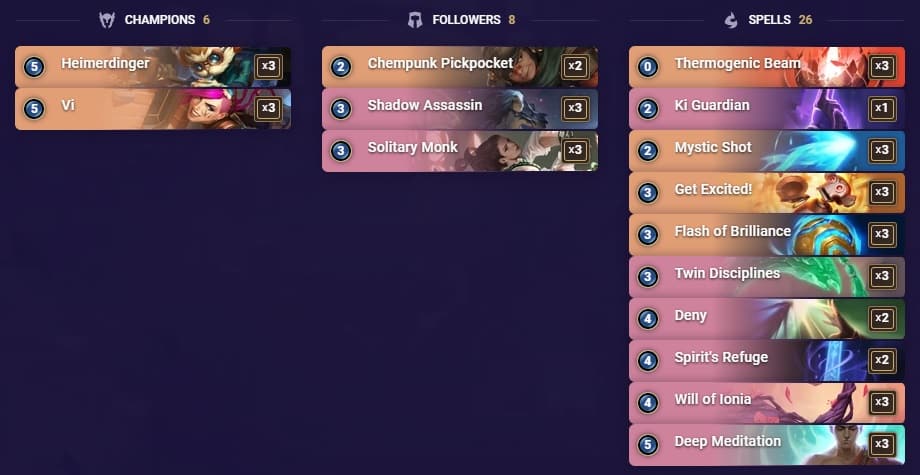 Heimer-Vi stands in the spotlight for the second week in a row. The deck is popular, has good matchups against most of the meta barring aggressive decks, and is one of the best options for people wanting to grind in Master. It is also a deck that requires careful planning, and it will prove especially rewarding for those who pilot it well.

For the first time since the official launch of the game, Demacia’s rating has taken a hit, albeit a very small one. The deck is still powerful, but just isn’t represented as much as it used to be. As one’s rank (in Master at least) doesn’t matter, people won’t resort to playing linear decks and instead opt for lists that allow them to hone their skills, such as Heimer-Vi.

Demacia is a very solid pick to climb to Master though, with good matchups across the board. Watch out for the more aggressive versions of the list that run Lucian, as they can cheese you by chaining several copies of Relentless Pursuit.

This deck went from being the new cool hipster archetype during the first couple of weeks following the release of the game to the tryhard meta staple that people hate to queue against now. The deck’s numerous healing tools allow it to easily survive against aggro, while its incredibly powerful top-end usually gives it the upper-hand in a Midrange mirror.

At the moment, it is being kept in check by Control lists, but who knows how things might evolve in the future. You will often run into people playing one copy of Thresh instead of a third Maokai to make the deck even better against aggro, but both options are just as potent.

Coming back from the dead is a common theme on the Shadow Isles, so it's no surprise Endure crawled back from its grave so soon after the nerf to Brood Awakening. Featuring a more aggressive core and fewer defensive tools, the deck drops its “anti-aggro” hat for a more proactive one, forcing your opponent to handle your board. By doing this, they are walking right into your trap, as they are helping you build a gigantic They Who Endure that will cause their demise!

Although the deck isn’t technically new, it was absent from last week’s snapshot in its former iteration. Now that Swim has Frankensteined this monster back to life, stitching together pieces of the lists that were popular in multiple regions, the deck is about to return to its past glory. This new version of Endure has been extremely popular lately, so be ready to face a lot of them in the future.

Haunted Relic and Omen Hawk are present in Swim’s list instead of Hapless Aristocrat and Crawling Sensation, so don’t be surprised to run into these cards as well. As the list consists mostly of Shadow Isles cards, The Wraithcaller/Mistwraith package is also a consideration.

Frostbite Control fights for the board using strong minions and freeze effects, the latter working nicely with Culling Strike and Reckoning. Since most of your units will reach 5 power thanks to their natural stat line or buffs from Omen Hawk and Avarosan Hearthguard, the board clear will do more harm in the opposing ranks than in yours.

Once again, this deck isn’t new and was already showing results in tournaments in the hands of Winding God weeks ago. However, up until recently, it saw very little play on ladder, which kept it from being featured in our snapshot.

The current state of the ladder is an ideal environment for this deck to thrive, with many meta decks being unit-based and The Ruination being nearly non-existent. It looks like it’s finally time to join the Freljord bandwagon. Better late than never. 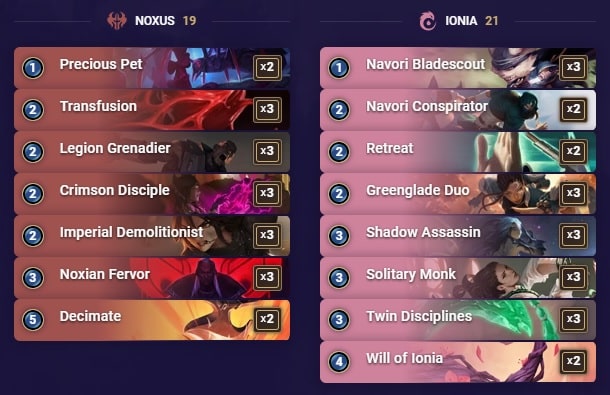 Brought to you by Kuongk, this very aggressive deck has been terrorizing the Asian server this week. We can only hope that its popularity doesn’t spread too fast to the rest of the world, although experience has already shown us that the Champless Burn fever is a very contagious one. Stay safe everyone, and don’t go out without your Grasp.

This list makes use of the “looting” package, which is one of the best options available to Bilgewater in the current meta, but remains different from just another Kleptomancy deck. Warning Shot, Make it Rain and Miss Fortune help you work towards Sejuani’s level up, while enabling strong Plunder cards.

Once Sejuani hits the board, your opponent had better have an answer to her, because they won’t get a single point of damage from their units for the (usually very short) rest of the game.

MF-Sejuani is very popular at the moment and it is cannibalizing the other lists making use of the Kleptomancy package. Keg Control, TF Slotbot, even the Kleptomancy list we featured in our previous snapshot (which we still recommend using over MF-Sejuani) are left standing in the shadow of this new giant. Even the Scout decks are being replaced!

This new Karma-EZ list brought to you by MetaWorldGaming cuts Deny to include more card draw, Jury-Rig, and 3 copies of Concussive Palm. This grants you more options and cheap spells to consistently trigger the effect of Eye of the Dragon. Besides, there is no downside to ditching Deny in the current meta, as there aren’t many crucial spells to counter anyway.

Burn is the most aggressive deck in the meta, able to close games out by Turn 5. The deck has gained a lot of power with the inclusion of Imperial Demolitionist and Noxian Fervor, making it more consistent than ever. However, one thing hasn’t changed: if you don’t manage to win the game by Turn 7, you’re most likely going to lose.

With all of its one-drops at 1 health and Boomcrew Rookie at 3, the deck’s early pressure potential has taken a serious hit. Crimson Disciple and Imperial Demolitionist can still get the job done, but if you don’t have them in your opening hand, you will find your other cards to be quite unreliable.

With the addition of Eye of the Dragon, Loyal Badgerbear & Grizzled Ranger, the deck has an actual curve apart from playing Remembrance on Turn 3. This allows you to put pressure on the board early on, before dropping Lux on Turn 6.

StrifeCro has made some changes to the list, including the Mageseeker package. Other than that, it plays out the same.

For a long time, Vladimir has been considered one of the weakest champions, but maybe now is finally his time to shine. Play your minions on curve, then attack with them and Vladimir. Most of your units don’t mind getting hurt, some even enjoy it. Your spells on the other hand can either save your minions from their doom or give you more options to fulfill your sadistic desires.

The deck is still fairly popular, but there really is no reason to play it over one of the other Freljord decks mentioned above if your goal is to achieve decent results in ranked.

Adventure starts with mushrooms! Sejuani’s level up too. Set up your engines, remove early threats, plant poison puffcaps in your opponent’s deck, and watch them die slowly as Sejuani keeps Frostbiting their board. With the many spells at your disposal, Starlit Seer tends to go crazy, so don’t be shocked to see a 10/10 Teemo go on a rampage every now and then.

This list is a bit too reliant on its engines and lacks card draw, which keeps it from being a serious meta contender, but it can be a real blast to play when it goes off. The deck isn’t really new, but happened to see more play than usual this week, like most other Sejuani lists.