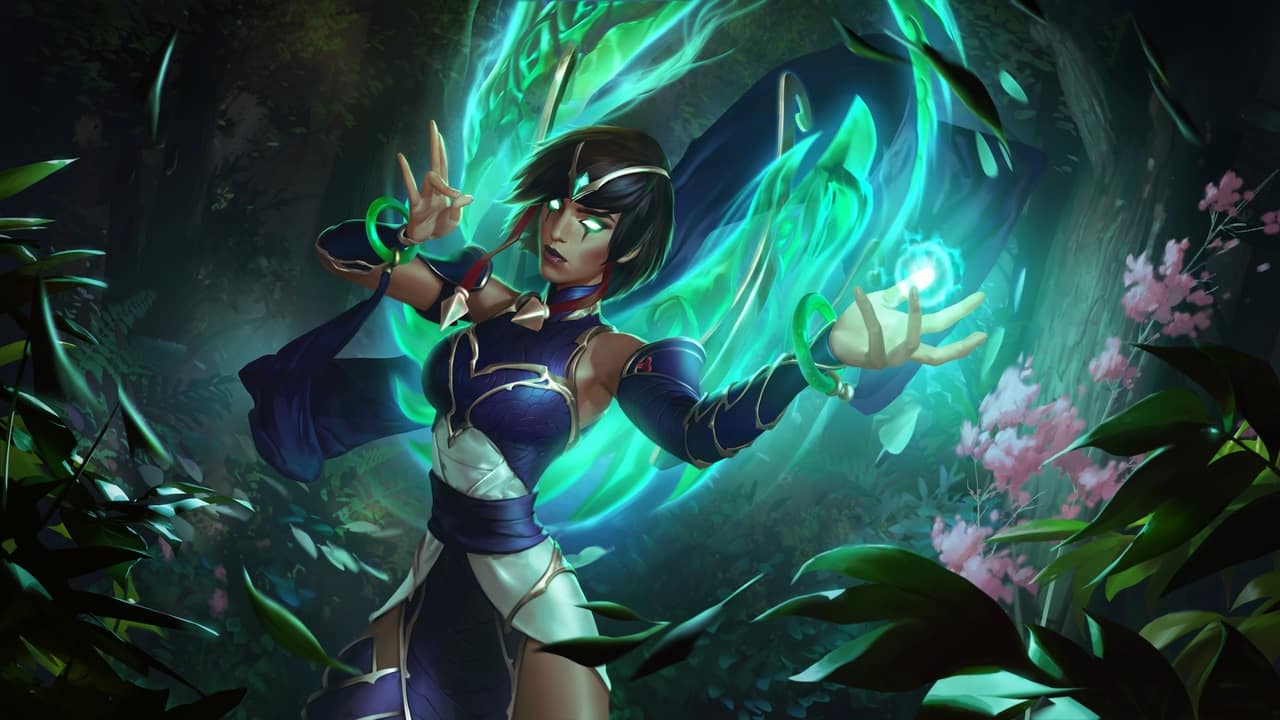 Welcome to TLG’s fourth meta snapshot for Legends of Runeterra, a series in which we give you our insight on the most represented decks in the higher ranks of ladder.

Legends of Runeterra released about a month ago and the meta has had enough time to settle since. The decks featured in this edition of our meta snapshot, as well as their ratings, don’t differ much from last week’s, so we will be covering the changes in a new “Review of the week” section of the article instead of going over each deck individually as we usually do. We will also use the opportunity to discuss the current state of the Master ladder.

Review of the week

Right now, there is a serious issue with the Master ladder and the whole MMR system in general. Winning games barely gets you anywhere in terms of ranking and the higher you are on the ladder, the harder it becomes to climb. When you lose a game, on the other hand, your ranking has no problems going down, and if you ever have the misfortune (and I’m not talking about the 3 mana one) to queue against a Diamond player and lose to them, it is going to take you a while to return to your former rank.

Because of this, many Master players have stopped playing ranked on their main account to secure their ranking, which increases the remaining ones’ odds to face lower-ranked players, continuously fueling this vicious circle.

In this environment, 2 types of players coexist: those who don’t really care about their rank and will experiment to see if they can discover the next Tier 1 deck while entertaining their audience or themselves, and those who try to get a crazy win streak with a top tier deck to grind this hell of a ladder. Most players in the first category tend to play varied decks, making it difficult to find specific lists to include in the snapshot.

Staying at the top of our ranking with 4.25 stars each, our head trio is the same as last week. However, all three decks will probably see some of their key cards nerfed in the upcoming patch, so their ratings may be different in our next update.

As the popularity of Karma-Lux has kept rising this past week, we’re still awarding it the number one spot. Burn, on the other hand, is seeing less play in Master. Although this may seem contradictory as the deck has a good matchup against Karma lists, there is an explanation to this. As previously mentioned, it is very difficult to grind spots in the Master ladder unless you perform an impressive win streak.

Burn is still one of the best decks to climb to Master, allowing you to play many games in a short period of time with an above average win rate. However, it is not a “win streak” deck, because of its abysmal odds against Shadow Isles, which keeps it from standing out in Master, where people prefer decks that have decent matchups across the board.

The last member of our jolly trio, Demacia Mid, is still peacefully doing its thing, with everyone playing a slightly different version of the same package.

With more Karma-Lux and fewer Burn decks around, Endure Spiders and CorVina are seeing much less play. Ionia decks can tech their lists against Burn to improve their matchup with cards like Health Potion or Eye of the Dragon, but there is nothing to do to improve Shadow Isles’ mediocre odds against Ionia.

Keep in mind that while Endure and CorVina may not be incredible in Master for the time being, they can still serve you well in other ranks, as you will encounter a lot of Burn on your way up.

The big winner of the meta shift in Master is Ezreal, who now has fewer bad matchups to deal with. As usual, most decks combine him with Karma for his OTK potential, but we are starting to see a version which includes Vi instead of Karma.

Lastly, it looks like players have acknowledged Swain-TF to be the superior archetype for our white-haired general, but it will still take some time before we see him rise to the top. 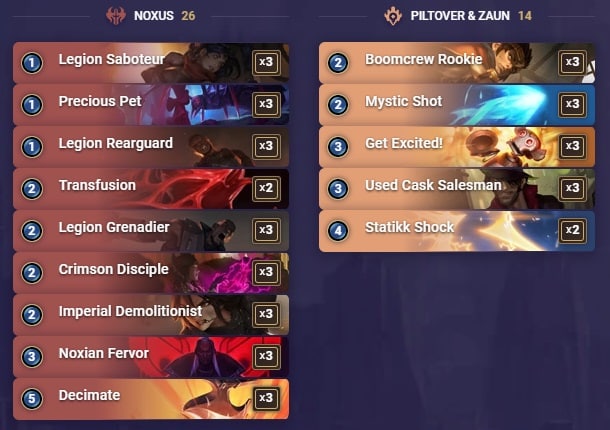 “I made this”. “You made this?”. “I made this”. Land a hit on your opponent and start stealing cards from them, teaching them the frustration of being beaten down by their own creation. The deck has many enablers for Plunder effects, and can easily rack up damage thanks to its Keg-creating cards. Wait until Riptide Rex comes down and… Hey, don’t die yet! That was just a Warning Shot! 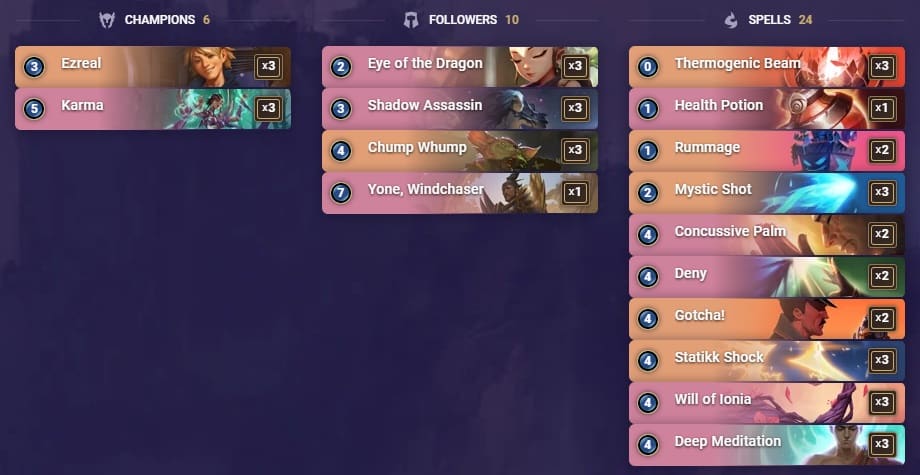 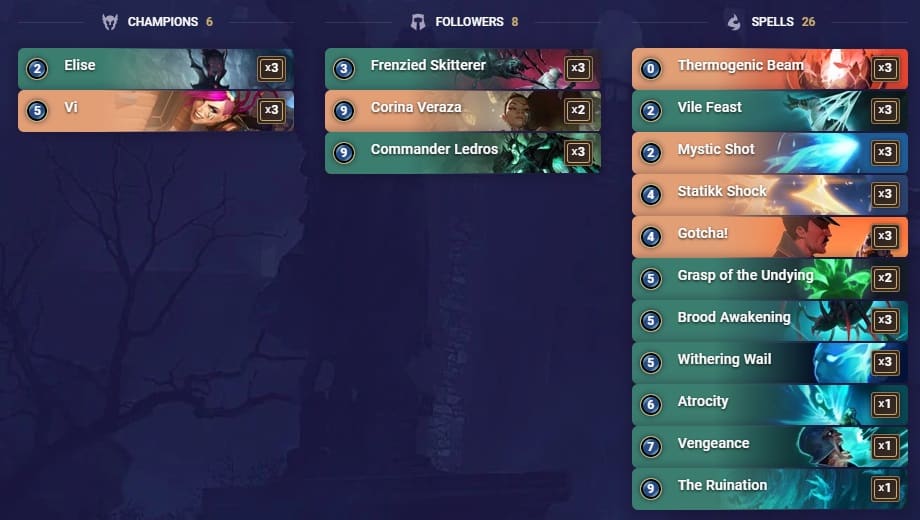 Packing a varied suite of damage-based removal, Swain is always leveled-up by the time this control deck deploys him. The combination of Swain and Twisted Fate was first introduced by Gvuardya, went on to take down Twitch Rivals in the hands of DogDog, and has shown itself to be a real meta contender. Between chip damage, card draw, and finishers that turn the corner quickly, ravenous flocks of players have been crafting The Leviathan this week. 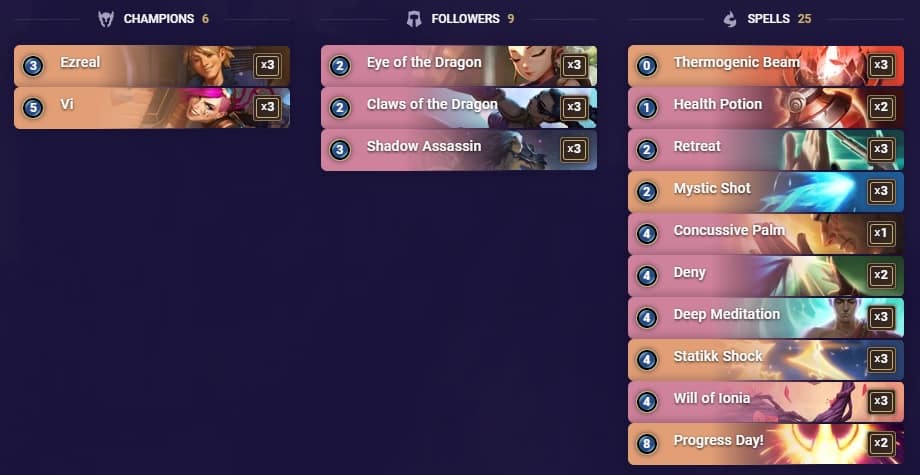 Vi’s flexibility allows her to roam in many different decks, including Ezreal archetypes! This list by Tealred makes for a less greedy alternative to Karma-Ezreal. It can stand its ground against Aggro and Midrange archetypes, while still retaining quite a punch, sometimes (but not always) leading to the sweet OTK every Ezreal player is secretly searching.