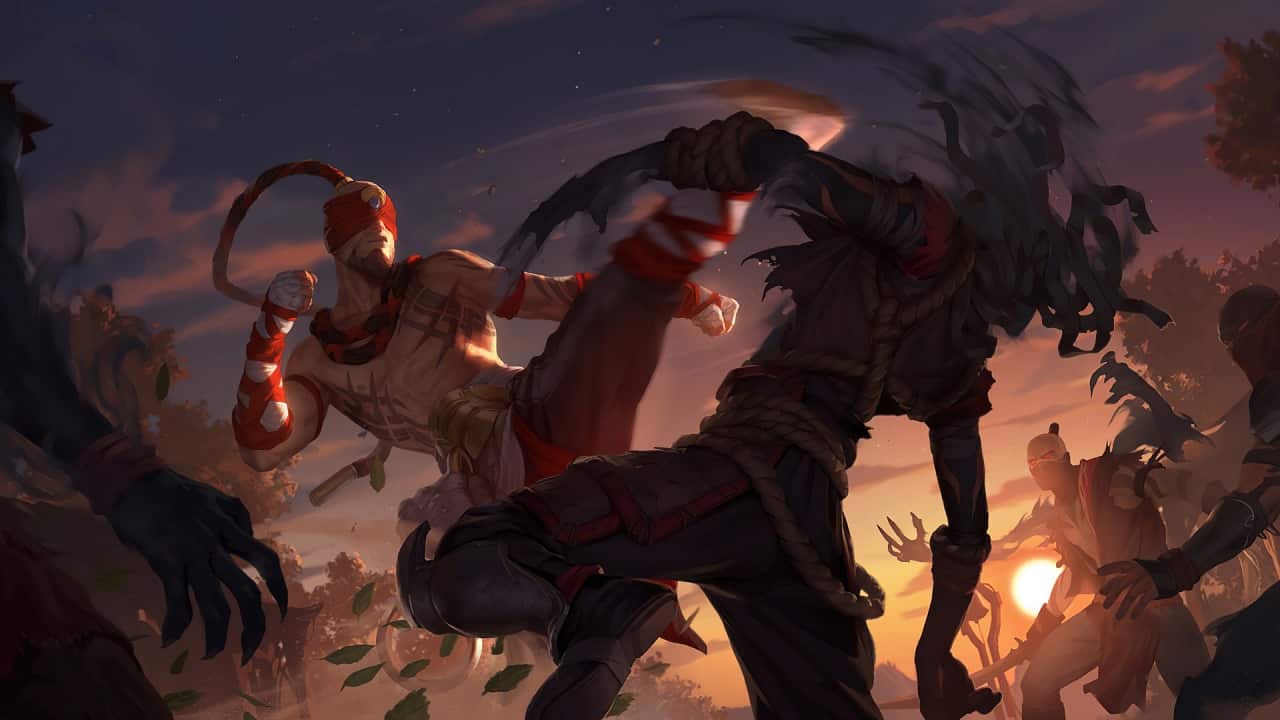 Every Sunday, we discuss the decks that are part of the week’s meta and rate them on a scale of 1 to 5 stars. We also look at the evolution of said decks’ ratings across weeks and draw conclusions regarding the current state of the game, all of this so you can delve into your own ranked journey with a head start.

This week, we split the snapshot into Tiers 1-3 instead of separating the regions, because the meta in NA and EU is similar. Zed-Lee is dominating the ladder after the buffs to Bastion. Since the next expansion is dropping in 10 days with Patch 1.12, the nerfs to Bastion may not be necessary. For now, there is no doubt that the card is overtuned, causing the entire meta to be orbiting around Zed-Lee.

We had the same situation a few weeks back with ASol-Trundle. The meta keeps changing every other patch, but it seems that the deck diversity isn’t what it used to be back in the Rising Tides expansion. However, we’re optimistic that with the new expansion, an ecosystem where multiple deck archetypes can thrive will re-emerge. 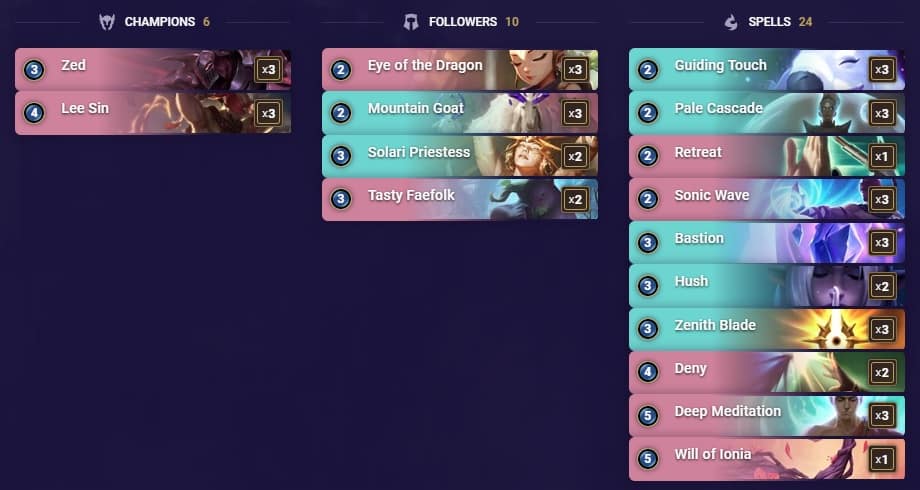 Lee Sin, with the added pressure of Zed, is the star of this list, kicking his way through the opposition thanks to multiple spells which can protect him. Keep your Lee Sin alive, be patient and wait until your opponent lowers their guard, then strike them down with a Zenith Blade. (Deck from RattlingBones)

The buff to Bastion has made Zed-Lee the best deck to be playing this week. Last week, we gave arguments for and against both Zed-Lee and Mono Lee. One such argument was that Zed was too easy to remove. The changes to Bastion have nullified this concern, Zed is now a powerful threat. All the reasons why Lee Sin decks are becoming stronger that we mentioned last week continue to apply this week.

(A) Deny and Bastion are strong against greedy decks like Warmother; (B) many decks either lack the ability to remove Lee Sin or don’t have enough removals to respond to Bastion; (C) the nerfs to decks with good early game pressure have decreased the appearance of those decks on ladder, meaning that in the majority of matches, the Lee player will have more than enough time to assemble his combo pieces.

Zed-Lee is very strong now, but as with all combo decks, it can be quite challenging to pilot even for Masters players! You often end up with a lot of cards in your hand, which makes sequencing tricky, especially given the fact that you need to plan ahead for your turns in order to activate Daybreak and Eye of the Dragon, for example.

Will Zed and Bastion be enough to end the game? If the answer is no, don’t get baited into early game power plays which can grant you an explosive start, but mean that you’ll run out of juice.

Swain’s threat levels are off the charts, forcing removals and terrifying your opponents at the mere thought of him hitting their Nexus once. With many early game removal cards and the extra damage granted by the kegs, Swain will always be leveled-up. What’s more, you’ll have access to Swain in the late game thanks to The Leviathan.

Swain-TF is even better than before, as it is strong against Lee Sin. To counter Lee, you need more than answers - you need an abundance of them. Ideally, you also want them to be cheap to function as pings for Bastion’s Spellshield, as well as ensuring you’re more mana efficient than the Lee deck.

The nerf to Petty Officer isn’t as significant for Swain-TF as it is for GP-MF or GP-TF, since Swain-TF’s win condition isn’t tied to its early aggression (which is what Petty Officer represents). Swain-TF can play one less Petty Officer for another Riptide Rex, which might even improve the deck for the current meta.

Stall the game with your infinite heals while ramping up to ASol. If the opponent puts down a lot of minions, Avalanche will kill them all, while Trundle keeps the bigger threats in check. In the late game, ASol combined with the Invoked Celestials are sure to bring you a sweet victory.

ASol-Trundle continues to fall ever so slightly. However, it’s important to note that the nerfs to ASol had an extremely marginal contribution to this. The sheer power of Lee Sin is the real reason why ASol-Trundle isn’t as strong as it used to be.

This list utilizes the best cards from Bilgewater. Ravenous Flock and Guillotine from Swain-TF and the Nab package from EZ-TF came together to create this monster. The deck is consistent, steadily refilling your hand with aggressive and control options, including several incredible removals. (Deck from Ultraman_CCG)

The deck is still good, but the nerfs to Yordle Grifter and Petty Officer ended up hurting it. Unlike Swain-TF, GP-TF can actually run out of removals and thus performs worse against greedier decks.

“Barriers, barriers everywhere...” - that’s what your opponent will be saying by the end of the game! A classic Demacian combo, with multiple challengers and the means of protecting them. This deck is a nightmare for unprepared opponents lacking the removals and pokes in order to break your multiple shields.

On the other hand, watch out for cheaper spells that are usually able to counter your barriers for a lesser mana cost; they might end up removing most of your threats.

Fiora-Shen has a slight advantage against Lee Sin decks because it has a better board presence in the early game.

GP-MF is an aggressive Burn deck that has come back in style as of late. The deck currently runs Jack, the Winner, who has an impressive statline which sees very few punishes as your Turn 5 play. Jack, the Winner’s ability creates a free card that allows you to deal 2 zero-cost damage in the following turn, while enabling Gangplank.

With Jack, the Winner atop of the previous arsenal that GP-MF is used to having, you quickly approach critical mass in terms of Burn potential. Every card represents some form of reach, which can be truly terrifying to play against.

GP-MF only has the Nexus rush game plan going for it and the nerf to Petty Officer means that there’s a very small chance that Petty Officer can ever connect to the Nexus. It dies to Withering Wail and 1-attack chump blockers. The nerf to Jack, the Winner means that you can no longer play Sleep with the Fishes and survive Grasp of the Undying. 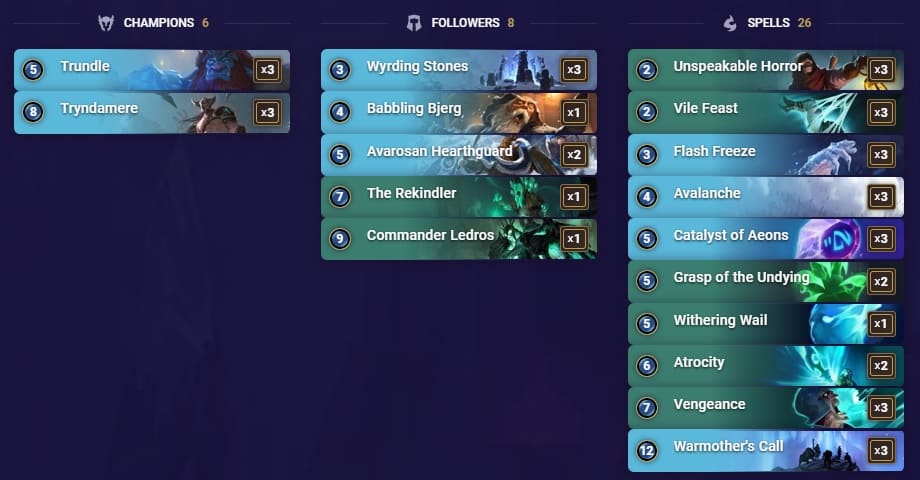 Ramping is trending, and who could make a better use of that than Warmother’s Call? This terrifying spell will overwhelm your opponent with huge monsters, but it comes at a big cost of 12 Mana. Use your AoEs at the right time to survive the early game and let Trundle stabilize your board until the call is made!

While the deck doesn’t have a good matchup vs Lee Sin, it’s able to thrive by virtue of all the Bilgewater decks running around.

Tempo Endure combines a great early game with a nearly unbeatable late game combo. Start off by swarming the board with your cheap units, before applying pressure on your opponent with big tempo plays revolving around Barkbeast, Cursed Keeper and a Sacrifice enabler.

During the mid game, keep up the pressure with Wraithcaller and Kalista, who both put in tremendous work. If your opponent somehow manages to stabilize the board, the joke’s on them, since They Who Endure finishes the job. (Deck from Precipic)

The deck can highroll with Barkbeast, Cursed Keeper and Ravenous Butcher, sometimes becoming undefeatable. Besides that, Endure doesn’t have any heavily-favored matchup. Against Targon, the pressure from Hush alone can make you lose the game, unless you have multiple copies of They Who Endure in hand.

Lux’s core goes well with ASol’s late game, offering you multiple options of both healing and removal, while maintaining board presence at all times. Concerted Strike and Single Combat help you deal with most of the threats Midrange and Aggro possess, thereby making up for Targon’s biggest weakness.

Radiant Guardian and Starshaping ensure that you’ll survive until Invoke or ASol finishes the game. (Deck from RattingBones)

Ashe-Sejuani fights for the board with its minions and freeze effects, the latter synergizing with Culling Strike and Reckoning. Since most of your units will have 5+ power from their natural stats or buffs given by Omen Hawk and Avarosan Hearthguard, the board-clear will do more harm in the opposing ranks than in yours.

You also have the opportunity to draw some cards with Trifarian Assessor, who will refill your hand in no time. In the late game, a leveled-up Ashe combined with Frostbite effects will prevent the survivors from blocking, which should grant you the victory.

Nightfall is an aggressive deck with many tools to kill its opponents. However, unlike your traditional “Aggro” deck, it generates sufficient value to sustain itself in the long run, allowing you to attain clutch wins in the late game. It’ll take some time to learn how to pilot this deck well, since it requires a lot of decision making and planning ahead.

Manage your resources wisely, get a little creative with Nightfall enablers (the incredibly powerful Stalking Shadows being one of them) and you will be rewarded by this sleeper-OP deck. (Deck from NicMakesPlays)

Just like the old casino decks, you focus on flipping your champions. The buff to Jagged Taskmaster brings the deck together by turning your 1-cost minions into real threats. (Deck from GlopNA)