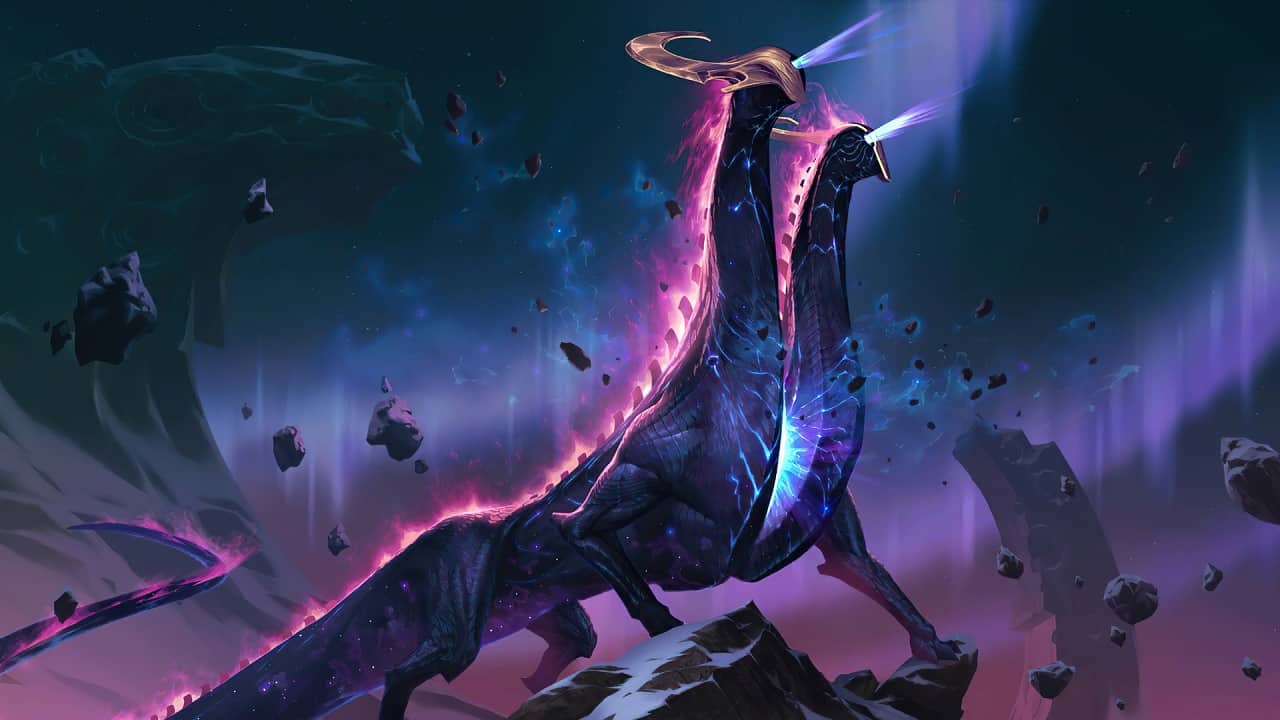 Every Sunday, we discuss the decks that are part of the week’s meta and rate them on a scale of 1 to 5 stars. We also look at the evolution of said decks’ ratings across weeks and draw conclusions regarding the current state of the game, all of this so you can delve into your own ranked journey with a head start.

This week we welcomed Earlmeister to our roster. We’re very happy to share his deck in the bonus section. The meta saw ASol-Trundle’s deck-building journey reach its zenith. We rarely rate any deck above 4.25 stars, but ASol-Trundle is truly in a class of its own and hence warrants a rating of 4.5 stars.

Ionia decks are also being played, mainly Lee Sin, as a response to Lee Sin’s recent buff. With the inclusion of Ionia comes the inclusion of Deny, which is extremely bad news for Warmother players. Warmother would have had a solid chance to reach the heights of Tier 1, but Deny has effectively brought it back down to earth.

Stall the game with your infinite heals while ramping up to ASol. If the opponent puts down a lot of minions, Avalanche will kill them all, while Trundle keeps the bigger threats in check. In the late game, ASol combined with the Invoked Celestials are sure to bring you a sweet victory. (Deck via Raystlin)

The deck has gradually become more refined as the season has progressed. At one point, people were playing three Icequakes, on top of a full set of Avalanche. This led to clunky hands that MF Scouts and other Aggro decks took the opportunity to bully.

Now, ASol-Trundle plays Dragon’s Clutch, a card that allows you to retrieve two different dragons from your deck. As the deck’s only dragon cards are The Infinite Mindsplitter and ASol, you’ll always draw them with Dragon’s Clutch. Due to this consistency, the deck has become almost impossible to outplay anymore.

Trundle is a nightmare for Midrange decks to deal with. His Ice Pillar and his regeneration ability means that these decks have a very short window before Trundle starts to take out their units that have Vulnerable applied from the Ice Pillar. With Troll Chant, the odds of being able to deal with Trundle become extremely slim.

For many players, playing against ASol-Trundle means that we end up praying that our opponent doesn’t have a certain card, as otherwise we can’t play around it and hope to win. But in a deck where many cards serve a similar purpose (such as stalling, healing, taking out a win condition, being an impenetrable wall), praying that they don’t have a certain card is often futile.

The ASol-Trundle player IS going to have at least one of the cards you don’t want them to have! This is also a good time to opine that Targon is truly an overpowered region. Nerfing Asol’s level-up condition is nowhere near enough. Unless we see some big changes in the next patch, the meta is going to be unhealthy and frustrating for a lot of people.

Swain’s threat levels are off the charts, forcing removals and terrifying your opponents at the mere thought of him hitting their Nexus once. With many early game removal cards and the extra damage granted by the kegs, Swain will always be leveled-up. What’s more, you’ll have access to Swain in the late game thanks to The Leviathan.

In TLG, we call Swain-TF the “Reliability Monster.” Swain-TF’s strength is that games tend to play out roughly the same and you tend to be fishing for the same kind of hand in every matchup. Swain-TF is extremely good at crushing unrefined decks which populate the ladder with the Targon expansion. This is a good time to define what an “unrefined deck” is.

Unrefined decks in LoR aren’t exactly outright bad. They’re able to get a win from time to time, but they’re highly inconsistent and tend to win by upsetting the odds. Unrefined decks are either (a) typically reliant on some form of perfect hand to highroll or (b) simply a pile of greed. Take this week for example when many people are playing Lee Sin and Heimerdinger decks.

Swain-TF is saying: “I have all the control tools in the world. I’m going to kill your main threat and once that is done, you don’t have anything left. Now I can develop my The Leviathan + Swain and win. You’re never going to come back, because I’ll have sufficient cards to prevent you from doing so.”

While surprising, this list utilizes the best cards out of most of Bilgewater’s decks. Ravenous Flock and Guillotine from Swain-TF, the Nab package from EZ-TF and the early game pressure from the Aggro version of GP-TF.

It’s a “jack of all trades” in terms of sheer consistency, continuously refilling your hand with both aggressive and control options, including several incredible removals. (Deck from Ultraman_CCG)

The deck is still good, but the nerf to Yordle Grifter hurts. Also, unlike Swain-TF, GP-TF can actually run out of removals and thus performs worse against greedier decks.

Lux’s core goes well with ASol’s late game, offering you multiple options of both healing and removal, while maintaining board presence at all times. Making up for Targon’s biggest weakness, the Concerted Strike and Single Combat will help you deal with most of the threats Midrange and Aggro possess.

Radiant Guardian and Starshaping ensure that you’ll survive until a crazy Invoke or ASol finishes the game. (Deck from TealRed)

The deck is still great because it’s a part of Targon. However, unlike ASol-Trundle, Lux-ASol is a very fair deck. The healing from Radiant Guardian can be very good, but it’s predictable and easy to play around. The big problem is that the deck has a really bad matchup with ramp decks (e.g. ASol-Trundle and Warmother).

In a meta where your only good matchups are against MF Scouts and GP-MF, Lux-ASol can seem a bit underwhelming.

GP-MF is an aggressive Burn deck that has come back in style as of late. The deck currently runs Jack, the Winner that has an impressive statline which sees very few punishes as your Turn 5 play. Jack, the Winner’s ability creates a free card that allows you to deal 2 damage for free the following turn, while enabling Gangplank.

With Jack, the Winner atop of the previous arsenal that GP-MF is used to having, you quickly approach critical mass in terms of Burn potential. Every card represents some form of reach, which can be truly terrifying to play against.

Tempo Endure combines a great early game with a nearly unbeatable late game combo. Start off by swarming the board with your cheap units, before applying pressure on your opponent with big tempo plays revolving around Barkbeast, Cursed Keeper and a Sacrifice enabler.

During the mid game, keep up the pressure with Wraithcaller and Kalista, who both put in tremendous work. If your opponent somehow manages to stabilize the board, the joke’s on them, since They Who Endure will finish the job. (Deck from Precipic)

Endure is farming some decks, such as Lee Sin and GP-TF, easily. With the right hand (e.g. Barkbeast into Cursed Keeper into Ravenous Butcher), you can win any matchup. But the opposite is also true, if you have a bad hand, you’ll lose no matter what.

The biggest issue is simply having to play against ASol-Trundle and Lux-ASol because of Hush. Without those two matchups, Endure could be a Tier 1 deck.

“Barriers, barriers everywhere...” - that’s what your opponent will be saying by the end of the game! A classic Demacian combo, with multiple challengers and the means of protecting them. This deck is a nightmare for unprepared opponents lacking the removals and pokes in order to break your multiple shields.

On the other hand, watch out for cheaper spells that are usually able to counter your barriers for a lesser mana cost; they might end up removing most of your threats.

Nightfall is an aggressive deck with many tools to kill its opponents. However, unlike your traditional “Aggro” deck, it generates sufficient value to sustain itself in the long run, allowing you to attain clutch wins in the late game. It’ll take some time to learn how to pilot this deck well, since it requires a lot of decision making and planning ahead.

Manage your resources wisely, get a little creative with Nightfall enablers (the incredibly powerful Stalking Shadows being one of them) and you will be rewarded by this sleeper-OP deck. (Deck from Ultraman_CCG)

Nightfall was really good against unrefined ASol-Trundle in the early days of the expansion back when they were running a full set of Icequake, as well as Bilgewater decks. However, ASol-Trundle is really powerful now and there are fewer Bilgewater decks following the nerf to Yordle Grifter and the buff to Lee Sin. 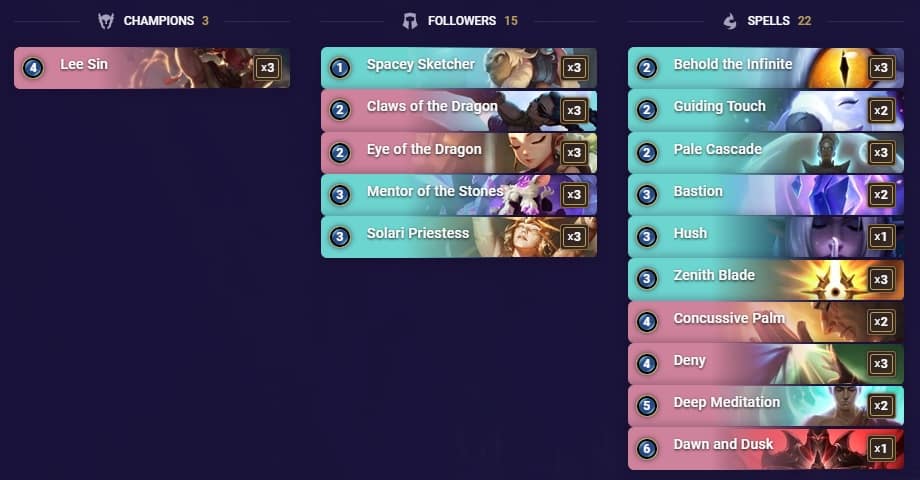 Lee Sin is the sole star in this Midrange list, kicking his way through the opposition thanks to multiple spells to protect him with. Don’t let your win condition die, but wait until your opponent lowers his guard, then strike him with a Zenith Blade. Finish him! 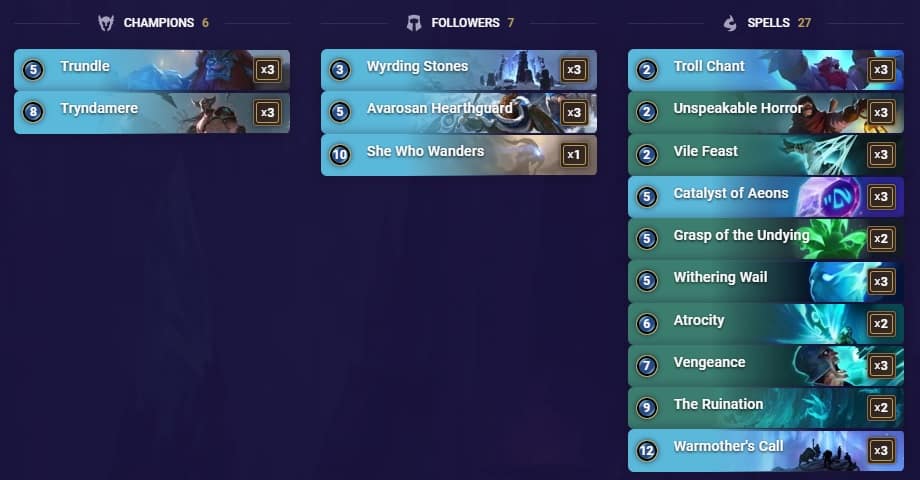 Ramping is trending, and who could make a better use of that than Warmother’s Call? This terrifying spell will overwhelm your opponent with huge monsters, but it comes at a big cost of 12 Mana. Use your AoEs at the right time to survive the early game and let Trundle stabilize your board until the call is made! (Deck from AlanZQ)

High-cost spells are very vulnerable now that Deny is popular again; Warmother’s Call is no exception.

This deck was played mainly to bully decks that have a tendency to brick (e.g. Warmother and ASol-Trundle). With Warmother seeing less play, it has lost one of its best matchups, while the refined ASol-Trundle deck offers more in terms of its early game and consistency now. To add fuel to the fire, the nerf to the “Cook” didn’t help the deck.

Hodor and The North

This is a Decisive Maneuver deck with Ancient Yeti and Braum, from our new team member Earlmeister. Don’t be turned off by the cheese, because this deck might just be the next big thing...

On mulligan, look for low cost creatures and Yetis. While you primarily want to focus on surviving the first three turns, if you see an opportunity of a free board, you should go on the attack. This Deck doesn’t start to shine until Turn 4, where you should aim to play Braum if possible. Keep in mind that this deck doesn’t circulate around Braum - it’s easy to tunnel vision into that.

Remember that stuns and removals like Whirling Death will allow Overwhelm creatures to hit the opposing Nexus. Don’t even think about replacing Alpha Wildclaws with Darius. They’re better than Darius, as they aren’t conditional like he is and they offer a guaranteed 6 HP to help you survive until you can finish with Decisive Maneuver!