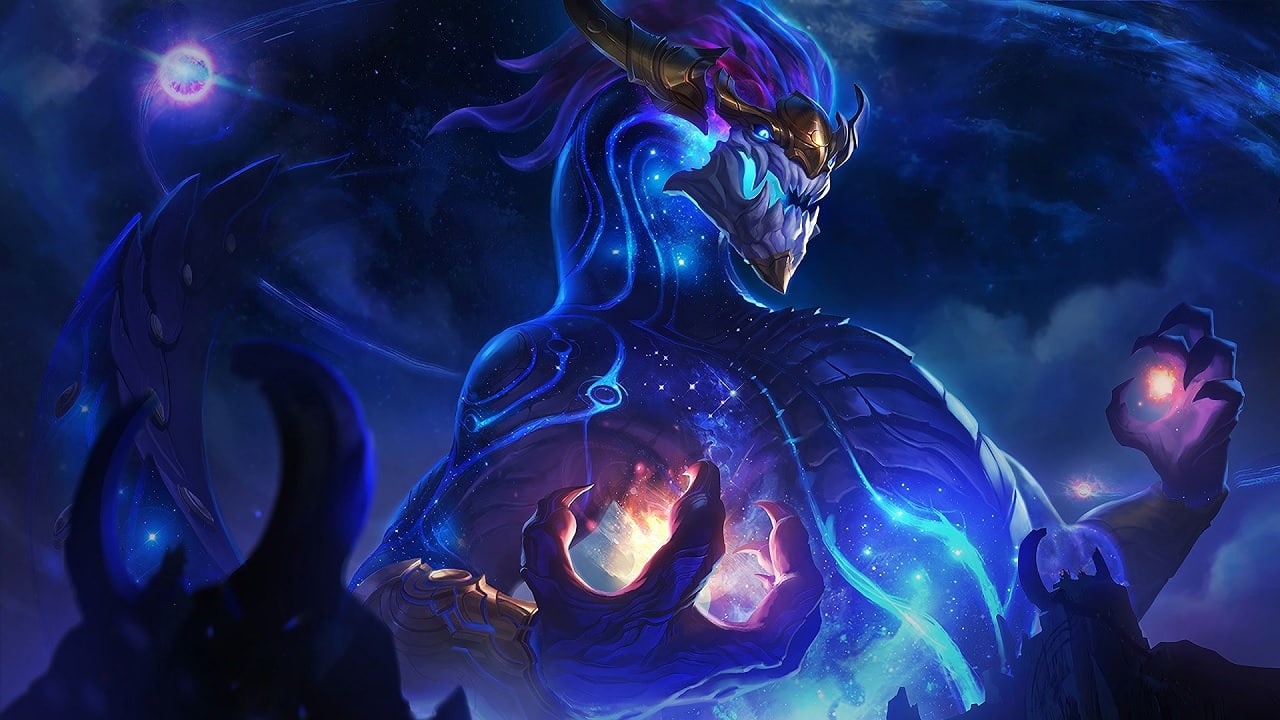 Usually, we discuss the decks that are part of the week’s meta and rate them on a scale of 1 to 5 stars. This week, the team has decided to refrain from rating the decks as the meta is still evolving. We didn’t list decks for novelty’s sake, but instead focused on decks that we think will have longevity.

We will be highlighting the decks that we think have potential to become relevant in the meta after the dust has settled. Nonetheless, we have still endeavoured to order the decks according to their current power level. An important theme of this week’s snapshot is that many old decks are still viable and function as a barometer to determine if the new decks can make the cut.

Nightfall is an aggressive deck with many tools to kill its opponents, but unlike a traditional “Aggro” deck, it can generate enough value to sustain itself in the long run, allowing you to clutch wins in the very late game.

The deck requires a lot of thinking and planning ahead, and it will take some time to master and play properly, as lots of decent plays will be available to you each turn. Manage your resources wisely, get a little creative with Nightfall enablers (the incredibly powerful Stalking Shadows being one of them), and you will be rewarded by this sleeper-OP deck.

Additional notes: This deck is difficult to pilot, as players are used to linear decks that play themselves. Nocturne-Diana forces players to make complicated decisions, such as which follower they should pick with Stalking Shadows and which Nightfall activator to play.

The deck also has multiple win conditions, as well as a variety of minions; these include Lunari Shadestalker with Elusive, Crescent Guardian with Overwhelm, Nocturne and Stygian Onlooker with Fearsome. With so many available lines of play, the win condition of the deck is in a constant flux, making for a complex but powerful list.

This versatility is also the reason why we positioned the deck so highly on the list. The ability to adapt your game plan to the deck you are facing is an incredibly rewarding experience for a seasoned pilot. Lastly, unlike the typical Aggro deck, this list has an amazing potential even going into the late game. It always has a way to refuel its hand and you never feel like you are at the mercy of the cards that you draw.

Swain’s threat levels are off the charts, forcing removals and terrifying your opponents at the mere thought of him hitting their Nexus once. With many early game removal cards and the extra damage granted by the kegs, Swain will always be leveled-up. What’s more, you’ll have access to him in the late game thanks to The Leviathan.

Swain-Twisted Fate as a deck is extremely good at crushing the unrefined decks that populate the ladder currently with the Targon expansion. The fact that it doesn’t have a terrible matchup makes it a very consistent deck.

Additional notes: The popularity of Targon means that many decks don’t have a way to answer The Leviathan. Of course, Targon has the ability to Invoke for obliterate cards. Using ASol-Trundle as an example, the fact that they need 14 mana (Starshaping and Supernova) just to deal with The Leviathan works in the favor of Swain-TF.

This deck combines the powerful late game of Aurelion Sol with the amazing early game that Daybreak brings. Play your minions to keep up with Aggro decks, or to pressure control decks. Late game Aurelion Sol is your primary win condition.

Additional notes: ASol-Leona bypasses many of the weaknesses of ASol-Trundle. It has a better curve and doesn’t need to rely on ramp. In fact, the list plays like a Midrange deck and doesn’t submit its win condition entirely to ASol.

The ability to have strong followers to contest the board means that you aren’t forced to have Trundle or Leona to help you stabilize and control the board.

What a deck! Leona-Diana is a Midrange list with Invoke characteristics. The deck is heavy on control, but instead of doing this with spells, its control takes the form of Leona’s Stun and Diana’s Challenger and Quick Attack.

This is an unbelievably powerful Aggro killer. It completely shuts down any tempo advantage the Aggro player can get on their attacking turns with Solari Shieldbearer and Leona’s Stun. The deck also has a crazy amount of income cards which can consistently give you a great hand for no reason!

Additional notes: There are no cards on turns 1 and 2 that can best Solari Soldier into Solari Shieldbearer. When playing against Aggro, the Aggro player is always forced to pass, making it extremely easy for you to stabilize and out-value them.

Stall the game with your infinite heals while ramping up to ASol. If the opponent puts down a lot of minions, Avalanche will kill them all, while Icevale Archer and Trundle keep the bigger threats in check. In the late game, ASol and along with the Invoked Celestials are sure to bring you a victory.

Additional notes: The deck is heavily punished by Aggro decks because it neither addresses the opponent’s board nor develops a board during the first 3-4 turns. 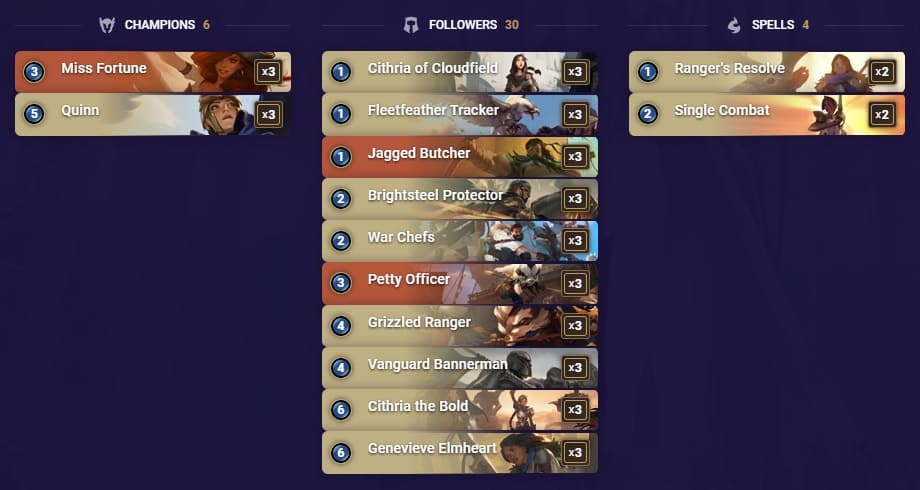 Additional notes: This list performed well in the first days of the expansion, as it punishes unrefined decks. However, the emergence of more Midrange and Aggro archetypes will mean that Miss Fortune Scouts will not be top dog for too long. Indeed, it loses to Swain-Twisted Fate and Leona-Diana, two of the top decks in the “meta” right now.

Both Lulu’s artwork and her ability are terrifying, and she can be put to a perfect use in this support-filled Demacia deck. And who would make a better use of all those support buffs than Challengers, value-trading every turn to take and keep the board, until a well-timed Rally offers the sweetest of victories.

But while the support’s abilities are threatening, they also have to expose themselves to a blocker in order to be activated, so make sure to judiciously protect them! 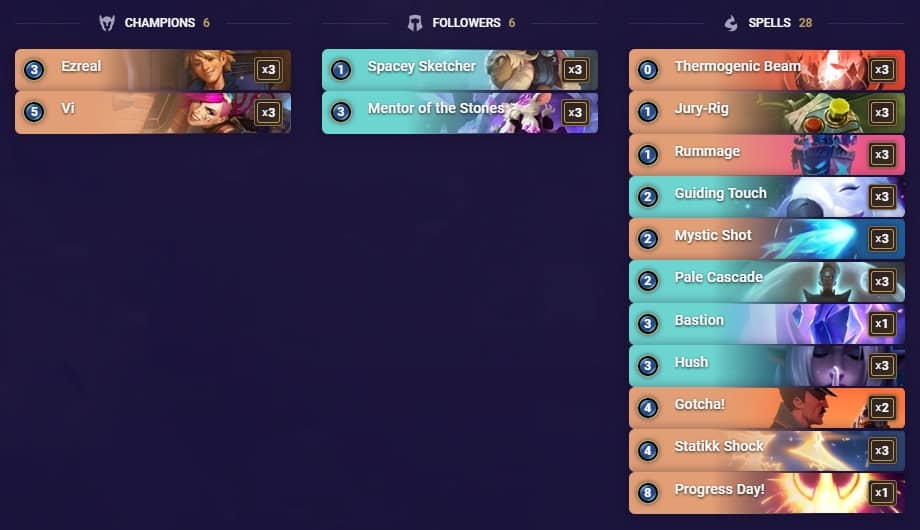 As it turns out, the seemingly innocent (and widely regarded as “useless”) gems have found a home in an Ezreal deck. This list seeks to aggressively flip Ezreal as its primary win condition and with several new additions to its repertoire courtesy of Targon, the need for Karma is somewhat eliminated.

Cards like Hush shut down an immediate threat momentarily, count towards Ezreal and help you get past the early game. Bastion, Pale Cascade and Guiding Touch will help you keep Ezreal alive.

However, as with most decks that rely on Ezreal, early aggression can sometimes turn out to be a problem. If you survive the early game, you will transition into a late game where you can cut your opponents down to size in an uninteractive burst speed lethal.

Made popular and piloted to #1 in NA Masters by GlopNA, Taric-Lee Sin is fundamentally a combo deck using “buff” cards like Zenith Blade or Pale Cascade to make the attacks of Lee Sin and Taric deadly. If Lee Sin is leveled-up with Overwhelm, his ability will strike his challenged unit into the opposing Nexus for his attack damage, and then he will attack regularly.

Using this combo, a 10 damage Lee Sin can finish your opponent from full health in one fell swoop. The rest of the deck is centered around leveling-up Taric and Lee Sin with targeted spells and gems. Make use of your different avenues of attack to finish each game accordingly.

Ashe-Sejuani fights for the board with minions and freeze effects, the latter synergizes with Culling Strike and Reckoning. Since most of your units will have 5 power due to their natural stats or buffs from Omen Hawk and Avarosan Hearthguard, the board-clear will do more harm in the opposing ranks than in yours.