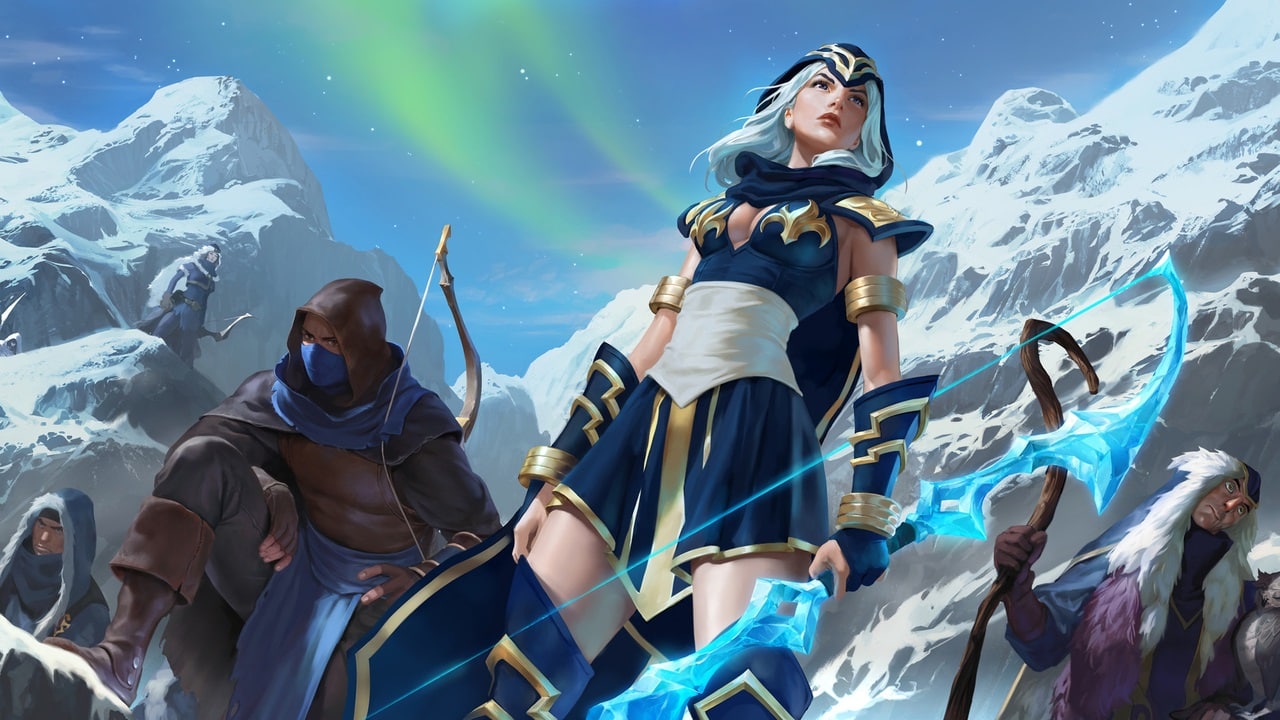 Welcome to TLG’s newest meta snapshot for Legends of Runeterra, a series in which we give you our insight on the most represented decks in the higher ranks of ladder.

Every Monday, we discuss the decks that are part of the week’s and rate them on a scale of 1 to 5 stars. We also look at the evolution of said decks’ ratings across weeks and draw conclusions regarding the current state of the game, all of this so you can delve into your own ranked journey with a head start.

Patch 1.6 has brought a lot of changes to the game, bringing satisfaction to most of the playerbase. The former top decks have been hit and some, like Noxus Allegiance and Heimer-Vi, have even completely vanished from the meta. As a result, the new “best decks” are pretty much the old “Tier 2” decks that lost their hardest matchups in the process.

The meta has been shaken up quite a bit (and is far from solved), which will definitely keep players busy until the next set.

Frostbite Midrange fights for the board using its minions and freeze effects, the latter working nicely with Culling Strike and Reckoning. Since most of your units will reach 5 power due to their natural stat line or buffs from Omen Hawk and Avarosan Hearthguard, the board clear will do more harm in the opposing ranks than in yours.

The deck has benefited heavily from the nerfs to every other meta contender and now stands in a very commanding lead. It has everything a Midrange deck could ask for: tall units that apply a lot of pressure, resist most removal cards and serve as strong anti-unit tools. You have a good cycle engine to ensure the deck never falls short on resources.

It has very solid matchups all across the board and unless someone discovers a hard-counter to the deck, it’s likely to keep its newly-earned crown for a while.

Before the patch, the Kato the Arm/Reckless Trifarian/Captain Farron version of this deck was played quite a lot. However, it would usually lose in the mirror match against the more traditional variation of Frostbite Midrange. Now that the deck is both extremely strong and popular, the alternate build is disappearing, since it can’t afford to be unfavored against itself.

TF-Ezreal is a tempo/combo deck that seeks to deal massive chip damage in the early to mid game, mostly due to a wide board, and end the game with Riptide Rex and/or a leveled-up Ezreal. The addition of Zaunite Urchin provides the deck with excellent consistency, while cards like Twisted Fate and Black Market Merchant give the deck the versatility it needs to navigate trickier matchups.

In Patch 1.5, TF-Ezreal fell down to 3.5 stars as a result of the Pilfered Goods nerf (and the nerf to Black Market Merchant). To add insult to injury, the ever-rising popularity of Noxus Allegiance didn’t help the deck in these already trying times.

Fortunately, Patch 1.6 heralded a Midrange meta, giving TF-Ezreal enough breathing room to develop its win conditions. On top of this, the deck has long been known for being a great Midrange destroyer. However, Shadow Isles decks such as Sea Monsters and Braum-Anivia can prove to be tough opponents.

Karma-Ezreal is a combo/control deck that seeks to survive the early to mid game with removal, while fulfilling Ezreal’s level-up condition. It refills its hand with Rummage and Deep Meditation, which work particularly well when Karma has flipped. Support units like Eye of the Dragon generate chump blockers that can help you survive long enough to acquire all of the pieces you need to win.

Together on the board, leveled-up Karma and Ezreal can win the game at burst speed, not allowing the opponent to react.

As usual, Karma-Ezreal thrives in a slow meta. The list took a hit with the nerfs to Shadow Assassin and Will of Ionia, but it managed to adapt quite well, including cards like Steel Tempest or even the good old Yone, Windchaser.

The deck can delay enemy progress with its several Stun effects, but it struggles to deal with beefy units and will lose to a wide board from Bannermen or Frostbite Midrange. However, it performs very well against Shadow Isles.

In addition to the Karma version, Ezreal is gaining some popularity with other champions, especially the ones from Noxus. You’ll probably encounter a Swain or a Draven version of the deck during your climb, which utilize the powerful targeting tools from Noxus in Culling Strike and Ravenous Flock. We will have to see if any of these versions become more popular than the Ionia one in the weeks to come.

If you enjoy having explosive turns where you can jam tons of huge units, you should definitely play this deck! It aims to survive the early game with healing while working towards getting deep by tossing cards. Once you get there, you can stabilize the board with large Sea Monsters and put your opponent on the clock when Maokai levels-up. However, with great power comes great mana cost: Will of Ionia can prove to be a serious threat.

The deck has a decent matchup against TF-Ezreal, but fares quite poorly against Karma-Ezreal, Bannermen and Frostbite. In order to win these Midrange matchups, a well-timed The Ruination will be key.

Tempo Endure combines a great early game with a nearly unbeatable late game combo. Start off by swarming the board with your cheap units and apply pressure on your opponent with early powerful tempo plays revolving around Barkbeast, Cursed Keeper and a sacrifice enabler. During the mid game, keep up the pressure with Neverglade Collector and Kalista, who will both put in absolutely tremendous work.

If your opponent somehow manages to stabilize the board, jokes on them, as They Who Endure will finish the job for you.

Much like all of the other decks that weren’t nerfed this patch, Tempo Endure benefits from the decrease in the number of bad matchups it has to deal with, especially the ones that used to pack 3 copies of Will of Ionia. This specific version has 3 copies of Wraithcaller and cuts all Freljord cards save for They Who Endure in order to consistently trigger its Allegiance.

The non-Allegiance version still roams around, including Omen Hawk, Avarosan Sentry, and Fury of the North instead of Wraithcaller and Hapless Aristocrat.

Control the board with your multiple Final Sparks and generate more value than your opponent. On Turn 5, the deck can perform a neat combo to sustain: play Blinding Assault with spell mana, attack and trade, then play Radiant Guardian and attack again. If you don’t have the combo, Thresh is a good 5-drop. Lux, The Rekindler and the multiple spells the deck has in store offer you a perfect way to close out games.

While Lux decks have been dead for a few weeks, players are finding new ways to play her by combining her with Thresh. You can usually play Remembrance on Turn 3 since there aren’t many copies of Deny around, but you can also curve out normally with Hapless Aristocrat on Turn 1, Vanguard Sergeant on Turn 3, Grizzled Ranger on Turn 4 and so on.

This deck is pretty good against Aggro/Midrange decks, but it suffers a lot vs the Nab mechanic as well as against heavily control-oriented decks and combo decks such as Karma-Ezreal.

While Bannermen wasn’t directly hit by the patch, its bad matchups have gained a lot of traction because of it, causing the deck to stagnate around the same level as before.

Karma-Ezreal and Sea Monsters are your primary targets as Bannermen, but you should avoid playing the deck if you’re facing a lot of Frostbite Midrange or TF-Ezreal.

The Lucian/Senna version is becoming more popular than Quinn, and our favorite ranger had to be laid off to make room for Greathorn Companion, who will do the same job as her without filling a champion slot. Oh, capitalism… 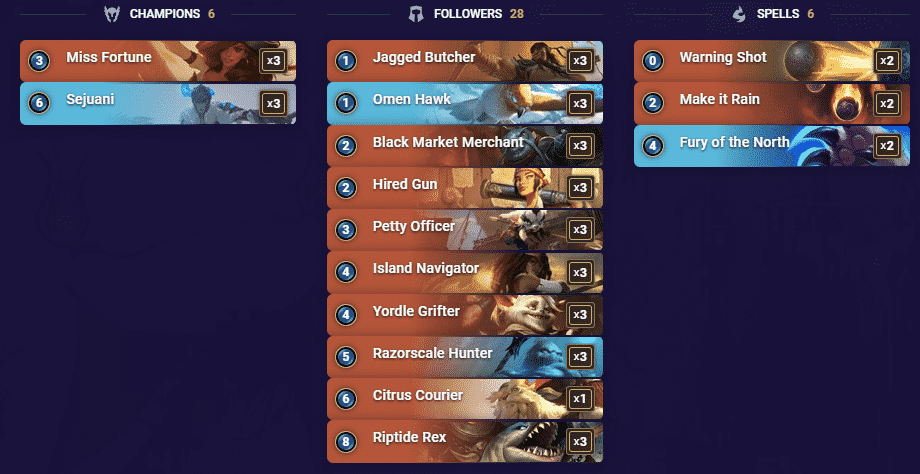 Getting rid of Pilfered Goods was the right call, allowing this deck to capitalize on another way of winning: Vulnerability. This is a good overall Midrange list built on its ability to make excellent trades and to apply pressure with Miss Fortune.

There’s also some healing and AoE so that you can handle the pressure. But who cares about the silly bird and the heals, Braum’s mustache is amazing and it’s all that matters, let’s be real.

The nerf to Braum was a big one, but more importantly, Noxus Allegiance has disappeared from the meta. The deck can still farm TF-Ezreal players, but the rest of the matchup spread is looking a lot less appealing, especially knowing how bad the deck is versus Karma-Ezreal.

In the same vein, we’ve seen some Warmother Control decks this week, enjoying a mostly Deny-free meta but, even so, failing to achieve tremendous results.

Yasuo’s stuns allow you to make it to the late game, but Katarina's late game viability is hindered by P&Z removal spells being used on her. Swain as a finisher is more reliable.

You can finish off opponents with The Leviathan + Swain combo, while during the mid game Yasuo’s ability also fulfills Swain’s level up condition along the way.

Yes. A Yasuo deck. In our meta snapshot. Had Frostbite Midrange not been so popular, we could even have used him as a clickbait header. Oh well, maybe some other time.

This deck is catered to a Midrange meta and cuts Deny as there really isn’t much to be countered lately. It fares rather well against most unit-based decks, especially those for which removing Yasuo is a problem.

Fast & Furious, this deck doesn’t have the time to play around. Throw away your whole hand and take advantage of the freebies on your Discard-oriented cards and hope for the best. With Draven as Dominic Toretto and Jinx as Leticia Ortiz, call your friends and start the race.

Brothers’ Bond, Vision and Arena Battlecaster will be the nitro in your engine: have some and you’ll power up your car(ds), get a handful of them, and prepare for the breakdown. With this deck, it’s hit or miss, so get ready for explosive wins and absolutely devastating defeats.

Discard is pretty much the only Aggro deck left in this meta and it’s not doing too well. You’ll need to rely on perfect hands to steal games before the opponent even gets a chance to react, so don’t expect too much consistency from the list.