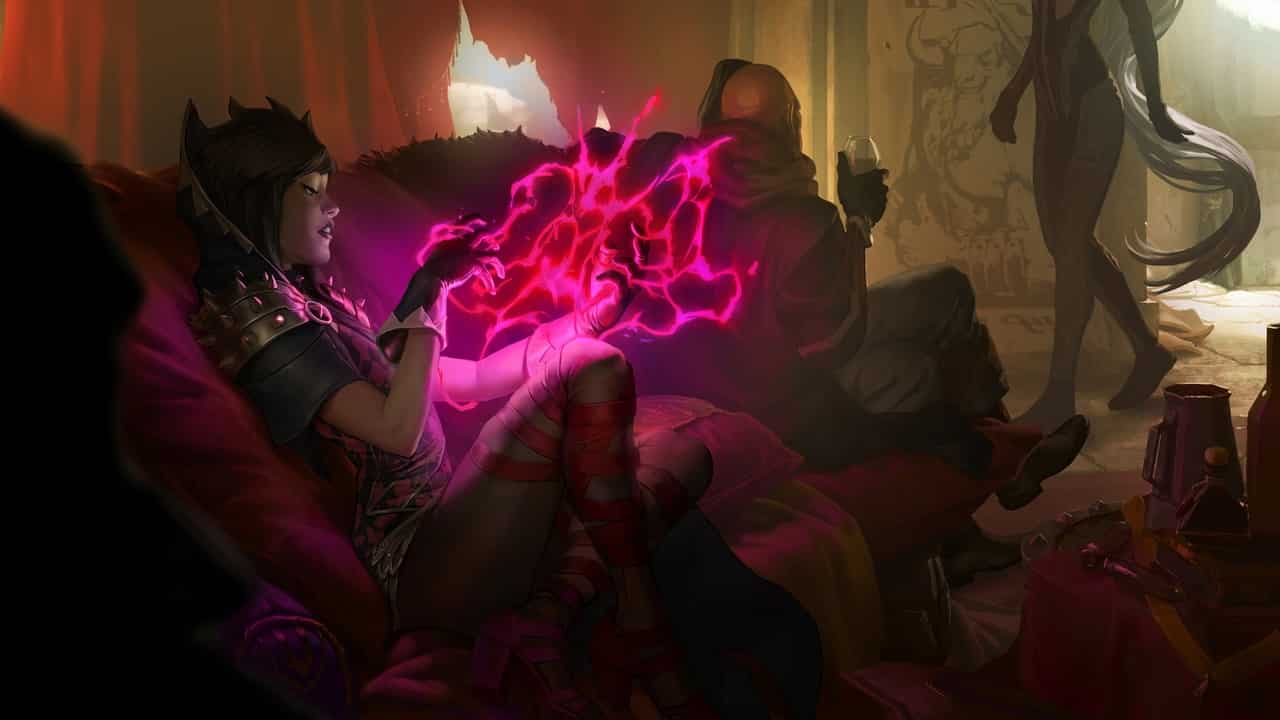 Welcome to TLG’s tenth meta snapshot for Legends of Runeterra, a series in which we give you our insight on the most represented decks in the higher ranks of ladder.

Last week, 2 cards were nerfed as part of patch 1.5 to try to bring novelty to a meta many were unhappy about. Although these changes have seemingly not had any impact on deck representation whatsoever (with most decks featured in the snapshot remaining exactly the same), the balance of power between them is looking very different now.

They said it couldn’t be done and yet, a Noxus Allegiance deck is finally seeing the light. What’s more, it’s really powerful. The Overwhelm keyword from Iron Ballista, Basilisk Rider and Darius allow them to pierce through the enemy’s defenses, even at the cost of their own lives. Don’t be afraid to let them die, as The Harrowing will resurrect them for one final push.

Before the patch, Noxus Allegiance was the most popular deck to climb with, but it was on par with the likes of Heimer-Vi and TF-Ezreal. Since both decks got nerfed and thus dropped in popularity, Noxus now stands in a commanding position. Aside from Kinkou Elusives, Ashe-Sejuani and Karma-Ezreal - against which you still have very reasonable odds - few lists can deal with this apex predator right now.

It’s interesting to note that some people have decided to run Legion Rearguard instead Atrocity and Decisive Maneuver, losing some cheese/power play potential in favor of consistency.

At this point a staple in the meta, Heimer-Vi is a very resourceful deck. Its flexibility makes it one of the strongest decks to ladder with. Vi is able to handle a lot of threats, giving you some breathing room until you can set-up Heimer and invade the board with turrets. Heimer and Vi act in symbiosis, compensating for each other’s weaknesses so well that you’ll start asking yourself if this list even has any.

Solitary Monk went from 4 power down to 3. Does it change anything? Not really. The card still trades with the same units, with a few exceptions such as Basilisk Rider. Sure, when it used to hit the board on Turn 3 with the attack token, you could start pressuring the opponent’s life total, but Heimer-Vi seldom relied on Solitary Monk alone to win games.

Heimer-Vi still has solid matchups across the meta and will continue to perform as it used to in the hands of good players. With Bilgewater starting to disappear, it may actually be in a better spot than before.

Karma-Ezreal is a combo control deck that seeks to survive the early-mid game with removal spells, while fulfilling Ezreal’s level-up condition. It refills its hand with cards like Rummage and Deep Meditation. Support units like Eye of the Dragon generate chump blockers that can help with healing.

Together on the board, leveled-up Karma and Ezreal can win the game at burst speed, not allowing the opponent to react. While the deck can take the opponent from 20 to 0, chip damage with units like Shadow Assassin makes your job easier and more consistent.

With very few Burn decks around, the meta has slowed down a lot, which is Karma-Ezreal’s most favorable environment. The deck has an incredible matchup against all of the control lists, as you’re free to stall the game and wait until you find all the key combo pieces.

Concussive Palm, Will of Ionia and Thermogenic Beam make the Noxus Allegiance matchup much easier (although far from free). Deny will help you against The Harrowing.

A great Midrange deck that utilizes Zed along with Ionia’s Elusive units. Start off the game by buffing your units up with Omen Hawk, then go wide with Kinkou Wayfinder. You can sneak in chip damage during your attack turns and end the game with a massive Windfarer Hatchling. The best thing about this deck is that it’s favored against other aggro decks thanks to Kinkou Lifeblade and Will of Ionia.

Now that Elusive Burn is down, this is the best version of Elusives around. Much like Karma-Ezreal, the deck’s main appeal comes from the inclusion of Concussive Palm, Will of Ionia and Deny - all of which are powerful against Noxus Allegiance.

Kinkou Elusives also has the possibility to return Concussive Palm to hand thanks to Navori Conspirator, which makes it very good at racing when combined with the lifesteal from Kinkou Lifeblade.

Braum is back and facial hair has never been as relevant as nowadays! And there is an extra bird that’s actually the deck’s win condition, coming back on The Rekindler and becoming a terrifying threat in the late game, destroying boards while also being resistant to most removal.

There’s also a lot of healing and some AoE, in order for you to handle the pressure the aggressive meta will push upon you. But who cares about the bird and the heals, Braum’s Mustache is amazing and it’s all that matters, let’s be real.

The damage potential of Scouts makes it the best Bannermen variation at the time, applying more pressure, while also putting you at risk of obliterating your Nexus in one well-timed Rally. Back to Back offers value trades and 6 additional damage on Rally, or even more if coupled with the Scout mechanic.

In order to win games, the deck has to curve out perfectly, then draw Relentless Pursuit or Back to Back to close out the game before it is too late. This is exactly what makes the deck equally powerful and inconsistent. The window to kill your opponent is narrow and you almost always get outpaced by aggro. However, Bannermen have fewer bad matchups this week and thus, their rating goes up a little.

Braum-Swain is a versatile Midrange deck that rewards players who are able to adapt and improvise. This deck combines the beefy units and control tools of Freljord with Noxus’ offensive power to ensure that your units are both hard to kill and extremely dangerous. Start the game aggressively by playing cards such as Crimson Disciple and Imperial Demolitionist to chip down your opponent, then slam down Braum and Swain to take control of the game.

This deck has an easy time sticking its minions, as they are so thick and you can even heal them with Kindly Tavernkeeper. In addition to this, the amount of removal you have packs quite the punch and allows you to level-up Swain quickly. In the late game, you can play The Leviathan with Swain on the board for a nasty triple-stun on the enemy and go for the throat!

The deck was probably a bit overrated last week and performed better than it should have, due to the element of surprise. Now that it’s becoming more known, it catches people off-guard less often, but it’s still a fairly strong deck.

Frostbite Midrange fights for the board using its minions and freeze effects, the latter working nicely with Culling Strike and Reckoning. Since most of your units will reach 5 power due to their natural stat line or buffs from Omen Hawk and Avarosan Hearthguard, the board clear will do more harm in the opposing ranks than in yours.

Ashe-Sejuani does best against unit-based decks because of all of the removal that it packs. Freeze effects are effective against Noxus’ tall units and Culling Strike can deal with Crimson Disciple and other low-power cards like Heimerdinger. With Noxus everywhere, it’s no surprise the deck is making a comeback.

Versatility at its finest, TF-Ezreal can do anything in the right conditions, and it will be your job to fulfill those! Twisted Fate is an amazing flexible card that benefits greatly from you adapting your gameplan to the deck you’re facing, while Ezreal will easily level-up due to Make it Rain and Rex, making for an extra finisher in hard-fought games.

Big oof. Before the patch, this deck used to win most matchups by a small margin due to the value advantage it provided its player with Pilfered Goods. This led to tense matches that would reward good plays with a win.

Nowadays, Pilfered Goods doesn’t give you as much tempo and that small margin is gone, which means that a lot of even matchups have become slightly unfavored instead. TF-Ezreal is looking a lot worse, thus the massive drop in rating. 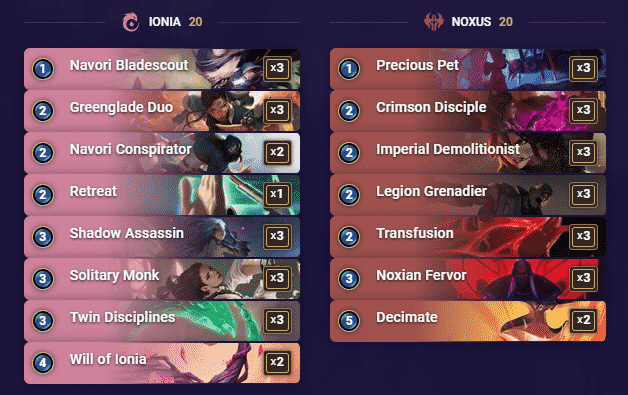 Another big oof. Solitary Monks were the legs that carried Elusive Burn forward, and they took an arrow to the knee. If you want to play Elusives (which isn’t a terrible idea in this Noxus Allegiance world), you’re better off running Kinkou Elusives.

If you enjoy having explosive turns where you can jam tons of huge units, you should definitely play this deck! It aims to survive the early game with healing while working towards getting deep by tossing cards. Once you get there, you can stabilize the board with big Sea Monsters and put your opponent on the clock when Maokai levels-up. However, as with great power comes great mana cost, Will of Ionia can prove to be a serious threat.

Sea Monsters were almost at the top a couple of weeks ago and now it’s the lowest-ranked deck in the snapshot. How the tables have turned! The meta is countering it pretty hard right now and the deck doesn’t really have an amazing matchup of relevance to make up for that fact.