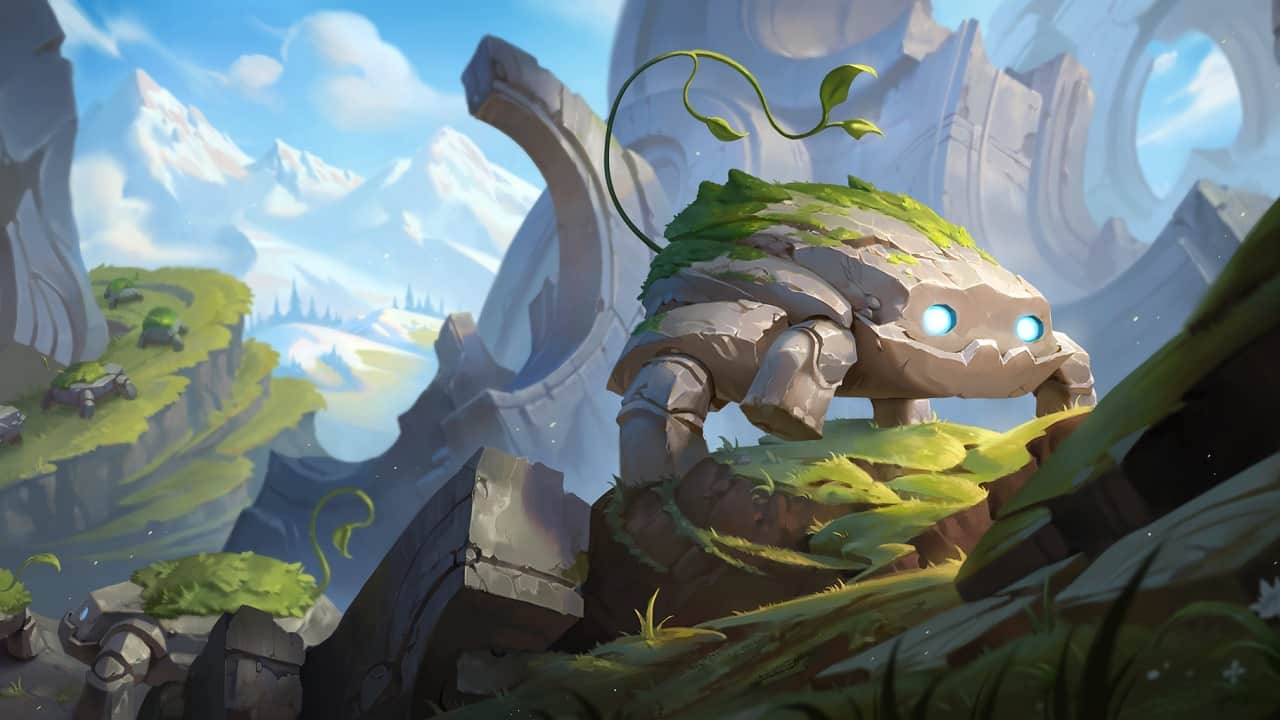 Welcome to TLG’s latest article for Legends of Runeterra. Today, we are looking both forwards and backwards before the new expansion. Den is looking forward to the impact on the meta that the new Guardians of the Ancient cards will have. Shurima, Ionia and Deep are on the up, while Thresh-Nasus should be fine barring any nerfs.

Ultraman is casting his eyes back over the latest Empires of the Ascended Seasonal Top 32 tournaments, offering his view on the strategies behind the success of the winners. Interestingly, while Thresh-Nasus was the most popular choice across all shards, almost none of the winning line-ups included it and instead opted for targeting either TLC (Trundle-Lissandra) or Thresh-Nasus itself.

If you have any questions, feel free to drop by our Discord. See you soon for a “Decks to try” article on the new expansion!

Now that we have seen the conclusions of the biggest tournaments this season had to offer, we can focus on the future and start thinking about the next one.

With over 40 cards joining the collection on Wednesday, the meta is bound to see some shake-ups. So in order to prepare for the changes, let’s analyze what kind of tools are joining the game and how it could help some decks rise or others fall.

Although the power level of the deck shouldn’t change much with the addition of The Wings and The Wave, it’s mostly the arrival of Irelia that sounds great for Nasus. With another synergy based on cheap 1/1 followers, the Slay mechanic should find another good match up to beef up the big dog or level-up Thresh more easily during the game.

In terms of things to worry about, any time Targon receives new cards, Thresh-Nasus must beware, as Targon has one of the worst cards for Nasus: Hush. Other than this, the Stun mechanic that could see play with Malphite’s arrival or Leona getting some help might slow down decks such as Thresh-Nasus (since they’re so board-centric).

Lastly, we can see more Elusive units being added to the game, with Dancing Droplet looking like a killer of a card and Chirean Sumpworker being a very intriguing synergy card. The Elusive keyword is one that the current best decks have trouble with; more Elusives in the game could help rein these decks back in line with the rest of the meta.

Every new release, there seems to be a little something for the Deep archetype to keep on progressing. If Bone Skewer has the same impact on the deck that Sea Scarab did over the past couple of months, then Deep should keep on its positive upward trajectory.

With a cheap removal spell that can also act as a value tool, the deck now finally feels complete and should be able to contend for a high Tier 2 or maybe even finally reach the heights of Tier 1 contention in the early weeks of the season.

For what seems like foever, Ionia has been considered the second region in a deck, as most of its synergies are either too weak or not sufficiently well-rounded. With Irelia alongside Dancing Droplet, Ionia should finally have something more than Lee Sin to build a deck around.

Tried and tested regional staples like Nopeify! and Deny will help solidify these new synergies, but other region-specific mechanics might finally see play, such as Recall. It’s still early to predict exactly how Ionia will look like in the next patch, but with so many good tools being added, it could be time for Ionia to be a leading region.

4. Shurima emerges as the pressure region

With fewer cards than the other regions, Shurima certainly felt lackluster at times. If it wasn’t for Thresh-Nasus, the region wouldn’t have much to shout about. With the new additions though, Shurima is looking like it has enough pressure tools to build an aggressive curve in the opening turns.

Merciless Hunter and Soothsayer are the two cards that should put Shurima over the hump when it comes to dominating games on the board. The former is a great 3-drop for most decks Shurima will build in the future, as there weren’t many options outside of Azir before. The later is a strong card that will make it a nightmare to remove early champions in most Shurima lists; Spellshield has become one of the best defensive keywords over time.

Renekton, in particular, must be happy about this addition, just like most cards that know they can dominate the board but need a bit of help to dominate Spell-oriented strategies as well. For example, if Renekton and Nasus have Spellshield, they will be much less susceptible to being neutered by the likes of LeBlanc-Ashe’s Frostbites.

5. Leona-Malphite will be a thing

The two Daybreak cards that have been revealed are decent, and Malphite isn’t so bad himself. The link between these synergies is Eye Of The Ra-Horak, a Landmark that works with both champions.

This anticipation is based on the fact that a lot of the strong decks should be vulnerable to the Stun mechanic, as they would rely on big units. We’re talking Thresh-Nasus, Trundle-Lissandra or any Overwhelm deck.

As a result, a deck that has access to a potent board control tool while also being able to develop its own strategies looks like a reliable anti-meta pick that might find a spot in our snapshot. And since I know you guys like the occasional spice, here’s a decklist I tried to come up with for the Targon duo. 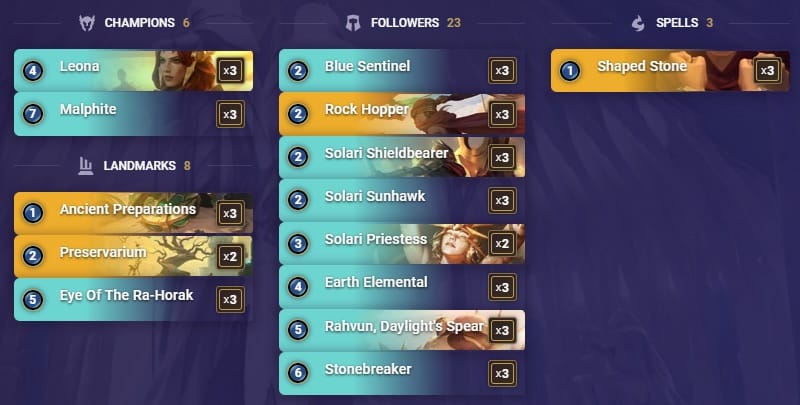 With the Empires of the Ascended Seasonal tournaments finished on all shards, let’s take a look back on the strategies that led the four champions to victory, and the line-ups they brought.

Most of the line-ups involved hard-targeting one of the top meta decks. Southeast Asia was an exception, as it was the only region where the big bad Thresh-Nasus actually managed to emerge victorious.

For Asia and EU, the focus was on TLC (Trundle-Lissandra), with two specific line-ups built to destroy that sleepy Watcher.

D K (Asia’s winner) brought this line-up consisting of Targon’s Peak, Braum-Vladimir and Overwhelm (Renekton-Sejuani with 1 copy of Sivir). As crazy as it sounds, it was a logical win for him, considering the amount of TLC line-ups he faced.

Targon’s Peak allowed him to outmaneuver most control decks, while Braum-Vladimir and Overwhelm have boards too chunky for AoEs to deal with. Targon’s Peak also has the unique ability to reduce the cost of Spectral Matron and Ice Pillar to 0 mana, which actively disrupts Lissandra’s level-up. Without even creating their Watcher, how is TLC supposed to win against the likes of Tryndamere and ASol?!

Hipster Waldo (EU’s winner) came in with this line-up and a similar strategy, taking decks that perform well against TLC. On top of Lucian-Azir and Scouts, two of the best matchups into TLC, he also had Tahm-Soraka, sealing his victory as he faced TLC a couple of times in the final rounds.

Lucian-Azir and Scouts share a similar strategy against TLC, punishing its lack of flexibility when dealing with the board, helping their units survive through Avalanche with Ranger’s Resolve or Sharpsight, and Rallying themselves in order to attack once more while TLC has no mana left to defend itself.

TLC also struggles a lot against Tahm-Soraka. This is because they have no way of dealing with the Star Spring and can’t handle the board. The TLC player is forced into not using Avalanche, as this would accelerate Star Spring’s win condition. Similarly, Vengeance is rather easy to neutralize with a well-timed Bastion.

Erigby (Americas’ winner) tried to counter Thresh-Nasus to the best of his abilities, using this line-up featuring Zoe-Vi, Shyvana-ASol and Deep. Shyvana-ASol frees up Zoe’s spot for the Zoe-Vi deck, and Deep has an ability to handle both early aggression and the later stages of the game, while only struggling against Thresh in the matchup.

It won’t be much of a surprise, but both Targon decks share a good matchup against Thresh-Nasus, as they can deal with aggression well enough not to get high-rolled by a Cursed Keeper into Ravenous Butcher, and have the Hush trap card to stop Nasus from rampaging in the later stages of the game.

FlyingFish (Southeast Asia’s winner) was the only one bringing Thresh-Nasus in this line-up coupled with Zoe-ASol and Renekton-Sejuani. If Overwhelm is a strong pick into TLC, Thresh-Nasus and Zoe-ASol don’t counter it in any way, so this was probably about playing stable, comfort picks rather than trying to read the field in order to counter it.

Obviously, Thresh-Nasus is counterable, but it’s still a very powerful pick (if not the best), as it has few truly bad matchups, and its high-roll potential is sometimes enough to defeat its counters, as the opponent might lack some key cards or face too much aggression for them to handle in the earlier stages of the game.

Generally speaking, the hard-target strategies were way more prominent in the Top 32 than during the Swiss Stage, as the field is easier to read when it concerns 32 players with similar backgrounds, rather than 1024 competitors with sometimes little to no experience in tournament play altogether.

Ultimately, these tournaments were a pleasant change of pace from the previous set of Seasonal tournaments, as Fizz-TF ended up standing up to its counters in those. Much to the audience’s delight, TLC and Thresh-Nasus couldn’t uphold the same standard this time.

Congratulations to the winners of this season, and good luck to those hoping to compete in the next one!