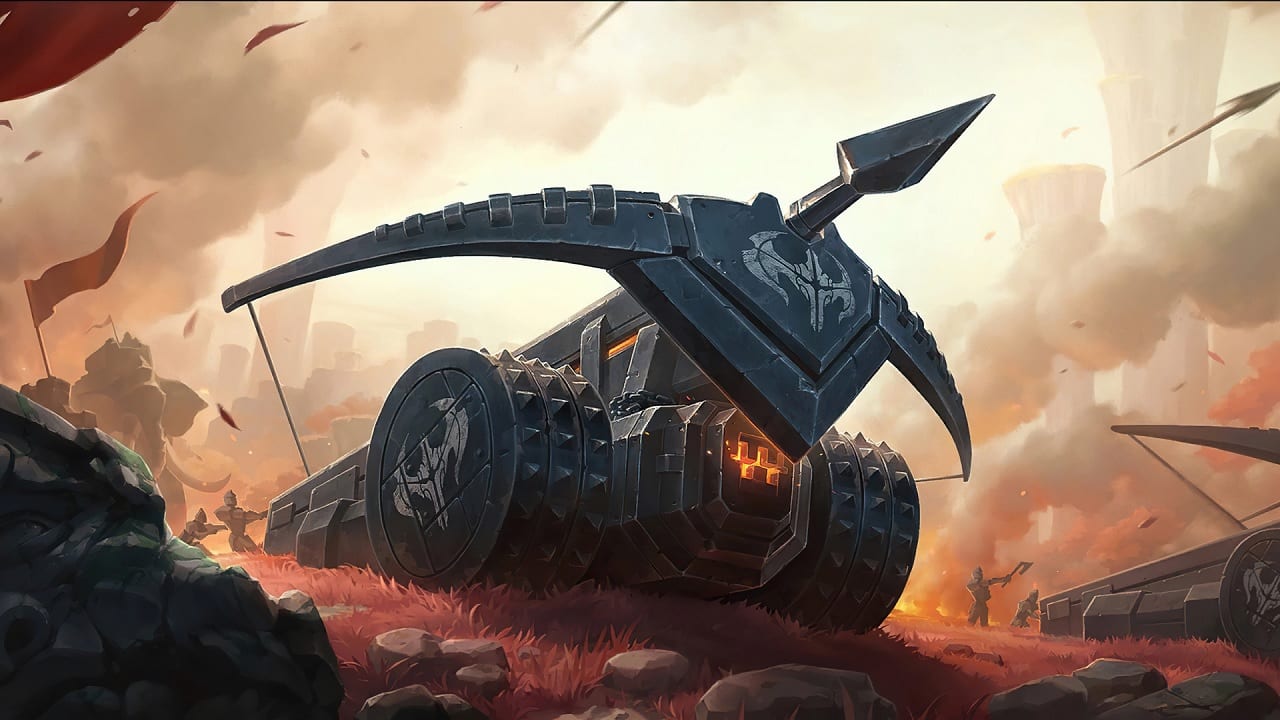 Best decks to get to Masters

Considering the meta in Masters hasn’t changed and everyone is waiting for Shurima to be released before they get back on the grind, we thought we would publish something for players who still have an objective to complete: the ones on the brink of getting to Masters.

With just a couple of days remaining to finish the climb, Diamond players looking to reach the Master rank are likely to be the ones under the most stress. Considering the short time left, choosing a deck to make that last step is very important and we want to help you make that choice.

Our ranking is based on two main criteria: how effective the deck can be when picked up for the first time and how good it is in the current meta. Considering the first criteria, we won’t feature decks that have a huge difference in winrate when played by a regular Master player compared to a low Diamond player. As such, you won’t see Aphelios-TF or Lee Sin decks on this list, although they might be great picks if you’re feeling comfortable with those decks.

Below each deck picture, you’ll find a basic game plan to help you focus on what’s important. We also included a link to a different deck with similar gameplay that you might want to try if you happen to struggle with our suggestion.

If you have any questions, feel free to drop by our Discord. Best of luck on your climb! 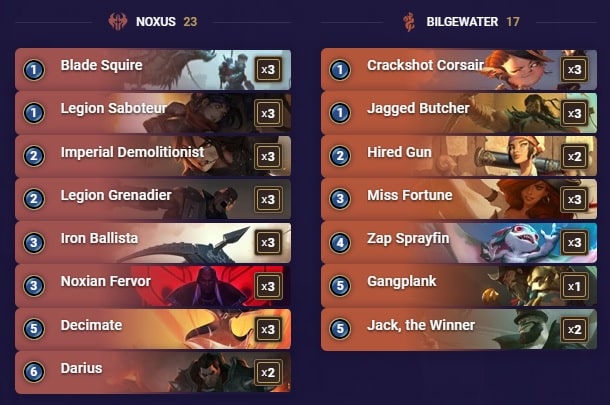 The basic game plan: Build pressure early in order to be able to control when you switch to a direct damage game plan.
Similar gameplay to: Elise Burn

This deck is simple yet very effective outside of Masters. The trick with this deck is that the pilot has a relatively easy time of sequencing their cards while also putting their opponent under a lot of pressure, putting the onus on them to make most of the tough choices.

While the deck gets punished by an opponent with a solid defensive capacity, the overall scenario involves focusing on developing a strategy rather than zeroing in on answering your opponent’s. As such, Pirate Aggro is a deck that can be rewarding for players looking to pick up a deck and get some fast wins with it without requiring a big time investment.

There are two ways to build the deck, either edging towards the board or packing more Nexus damage, but the list plays in a very similar fashion no matter which direction you decide to go, making it adaptable while not requiring too much adaptation from the player.

The list we’re featuring here is one that focuses on controlling the pace of the game and the opposing Nexus. It relies on two simple concepts: the build-up and damage, meaning that you want to create an advantage on board which you can transform into Nexus damage, and then use your spells and an evolved Darius to finish the match. 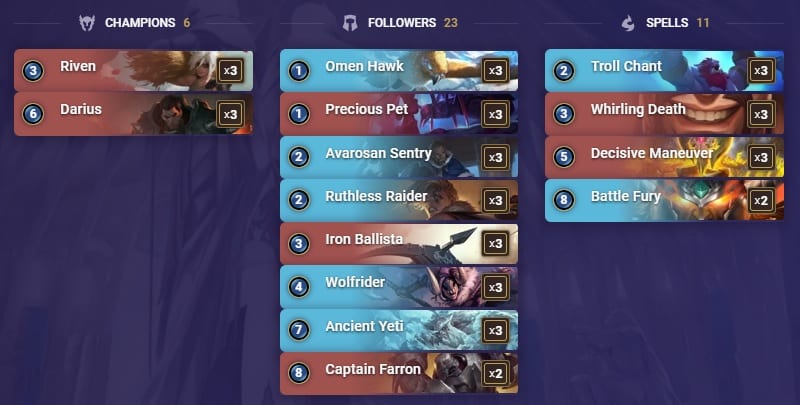 The basic game plan: Use your early game to chip in damage and build synergies, then transfer to a big Overwhelming board game plan.
Similar gameplay to: Draven-Darius

If we’re looking to do things quickly, we might as well aim to ignore our opponent’s defenses and go right through them. The game plan with this deck is to be able to develop as many stats as possible for as little mana as possible. We’re trying to dominate through the board here, so developing big bodies that our opponent can’t contain is the plan.

Once our board is developed, we should be looking at punishing opponents who can’t block our units efficiently, allowing us to push damage even if we’re blocked. Darius is the obvious enforcer in the deck, with Riven playing a supporting role until she can level up and become a threat.

Riven-Darius is comparable to Pirate Aggro, but is more board-focused. The deck reduces its direct damage potential in favor of becoming deadlier when the opponent isn’t careful with how much room they give you to develop your board.

The main limit for this version are other aggressive decks that would force us to defend instead of developing our board. Thankfully, the Overwhelm mechanic can still prove effective against these, as the average blocker should allow us to get a good amount of damage through anyway.

With the fairly low popularity of the Freljord region, the Overwhelm mechanic is in a good spot right now. In addition to being a good counter to the very popular Targon decks, it also puts your opponent under a lot of pressure, pushing them to make a mistake that you can capitalize on. 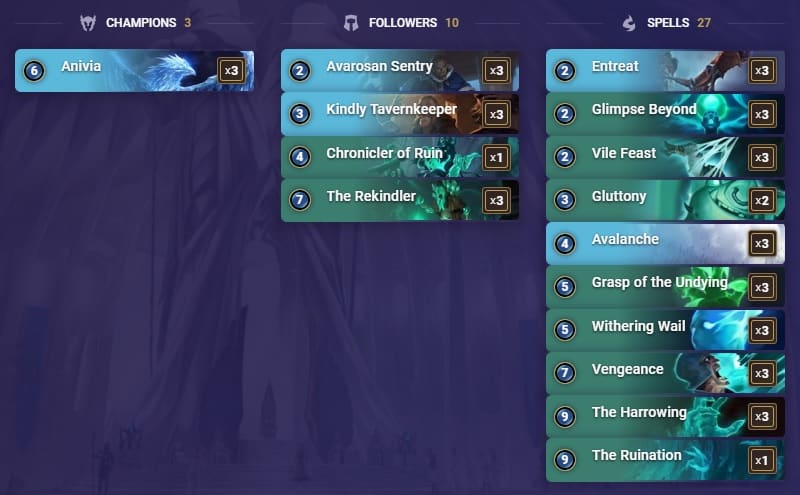 The basic game plan: Lockdown the board and protect your Nexus health, then think about finishing the game.
Similar gameplay to: Feel The Rush

While a heavy control deck can sound like a bad idea when you don’t have much time left to finish the climb, the Anivia archetype might buck this trend. With a sole focus on defending until Anivia can take over the game, this deck isn’t too complicated to grasp for someone who never played it.

Also, as it’s customary for the ladder to see a high popularity of Aggro decks at the end of the season, games shouldn’t take long to complete. Picking a counter instead of relying on a favorite can help you climb more efficiently.

We’re trying to capitalize on general tendencies here, and although you might face the occasional Targon opponent with Hush and the capacity to contest you in the late game, we’re aiming at having a majority of good matchups.

We recommend building the deck in a simple fashion, focusing on defending the board and our Nexus health. The idea here is to benefit from a probable smaller pool of decks, so no need to complicate things in the deck builder.

If you happen to face non-aggressive decks, focus on getting Anivia out early and start multiplying her as soon as possible. The relative absence of the Ionia region also makes SI much safer these days, as cards like The Harrowing or The Ruination shouldn’t see their worst enemy: Deny.

The basic game plan: Focus on your attack turns and being in control of the damage flow.
Similar gameplay to: Fizz-TF

You would be hard-pressed to find a strategy simpler than playing your followers and attacking without your opponent being able to block them. This is exactly what we will be looking to be doing here with Mistwraith Fearsomes.

This deck can be tough to play in a fast-paced environment, as it isn’t built to be defensive. If you’re running into a lot of aggressive decks, you might not want to go with this pick. Otherwise, Mistwraiths are great at capitalizing on opponents that struggle with anticipating your attack turns.

We also packed this deck with direct damage to help you get over the finishing line once your followers have done most of the damage. If you run into a deck that forces you into using your damage to control the board, then you can rely on The Harrowing to be a great finisher. This gives you two game plans that you can use depending on the situation.

While the archetype almost disappeared during the past few months, the surprise effect it can have could be huge, and players capable of counting precise damage output should find this deck easy to pick up. In a similar way to Overwhelm, Fearsome is a mechanic that forces the opponent into being capable of anticipating our next move in order to answer it.

Decks like Pirate or Discard Aggro look to have a better aggressive potential and should reward every player with good knowledge of these decks, someone looking to squeeze some wins and surprise their opponent shouldn’t overlook the hidden potential of this deck.

The basic game plan: Force a battle onto the board, which should usually favor you. Abuse Star Spring whenever possible.
Similar gameplay to: Aphelios-TF

This one might come as a surprise, as there is a much stronger Targon/Bilgewater combination: Aphelios-TF. The thing is, the best deck in the game is also one of the toughest to play well.

Tahm-Soraka isn’t a powerhouse in the current meta and its low popularity shows that the deck has obvious limits when facing experienced players. Something we can’t take away from the deck though, is that it’s really good when it comes to dominating the board.

With our opponent less likely to be able to adopt a flexible game plan, and heavy Elusive decks like Fizz-TF usually being more popular in the higher ranks, Tahm-Soraka can leave an opponent clueless as to how they can win the game.

You have a simple 3-step game plan, which should net you a good winrate in the last days of the season. First, you want to dominate the board with high HP followers in order to take the option to pressure you away from the opponent.

Then, protect your Nexus from direct damage, as it’s the next logical step your opponent should be looking to take. Lastly, try to finish the game, as we don’t want to give our opponent too much time to figure out a way back into the game.

The current meta features almost no landmark removal and most of the follower-removal is damage-based. As such, the trio of Star Spring, Soraka and Tahm Kench should be looking very solid to stay on the board for extended periods of time (preferably with the Star Spring landmark too), allowing you to capitalize on their value generation.

While this deck looks the most complicated to pilot on this list, we believe that some basic knowledge of this archetype and sound fundamentals of the game should be enough to find your way to the highest rank.