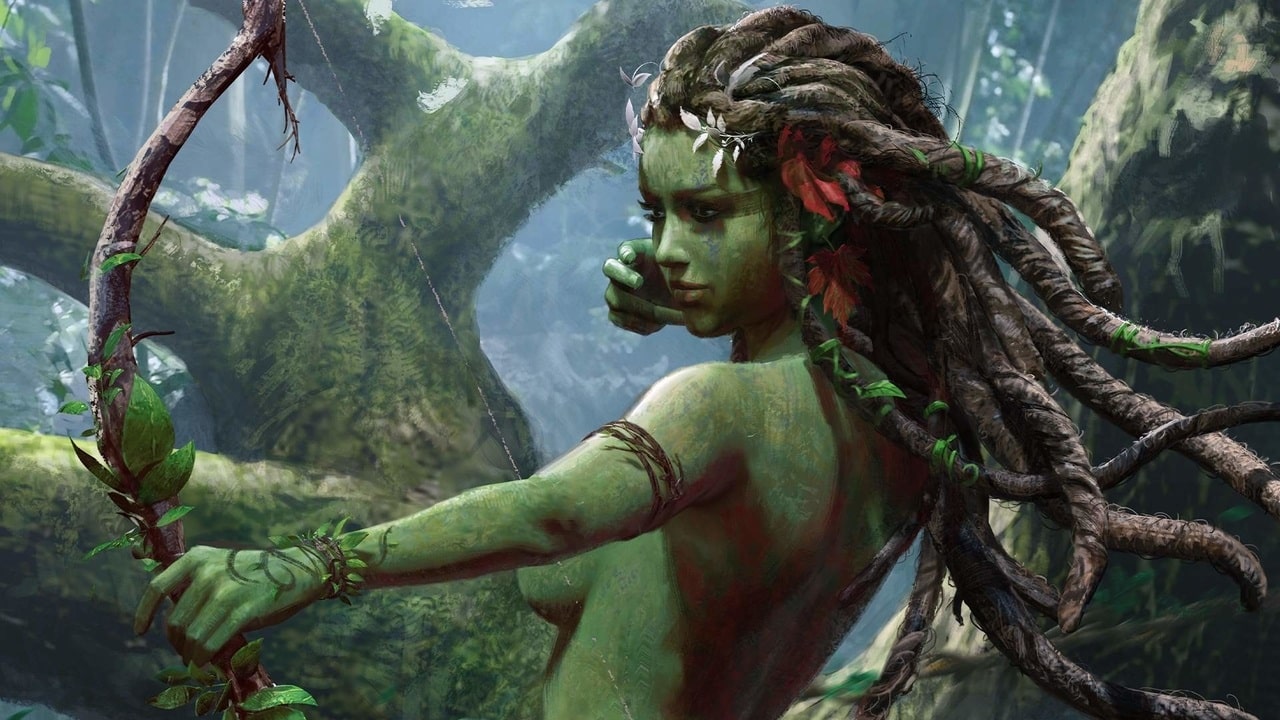 Andasama and Wusubi are back again with another Seasonal guide. Season of the Dryad has a very intriguing ruleset. At the end of each turn, all your odd-value units get damaged by 1, while the units with even-value get boosted by 1. Units with the Immune tag don't get affected by this rule (for example Milva and Frightener). 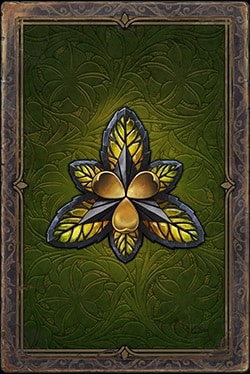 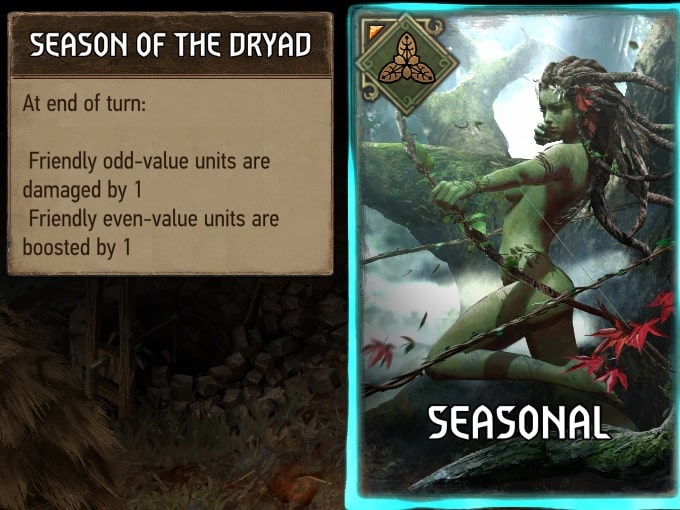 Skellige can make great use of odd-value units getting damaged by 1, due to potent engines like An Craite Greatsword and Heymaey Protector. Arachas Queen has by far the most powerful Seasonal deck. Since all Arachas Drones die and respawn at the end of your turn, Vran Warriors and She-Troll of Vergen have an infinite value ceiling if left unanswered. Scoia'tael and Northern Realms can easily take advantage of their even-value units getting boosted due to engines like Mahakam Defender and Tridam Infantry. Units that have Harmony or Inspired tags naturally synergize with the ruleset. Nilfgaard can rely on Hefty Helge, tactics and Nauzicaa Sergeants combined with Assimilate engines and Create cards.

The recently buffed Triss with the addition of some versatile bronze specials can be put in many decks in order to counter the engine-reliant and heavy boost-oriented decks which are very popular in this Seasonal. On top of offering you an extra copy of crucial neutral specials such as Dimeritium Shackles and Stammelford's Tremors, she can also utilize the powerful faction-specific specials like Freya's Blessing or Arachas Nest.

This card has never seen play, but it's useful in Dryad Seasonal. Acting as a reliable counter to Arachas Queen, when you time this card properly, you can also double-dip on the board-wide damage it deals to the enemy units due to the odd-value rule. Additionally, Tremors can get ridiculous in a Skellige deck with Greatswords, essentially punishing opponents for playing units.

While Dimeritium Shackles (combined with Triss) are common, most decks try their best to fit in Artefact Compression as well. Similarly to Tremors, this card finally found its use. The ability to both lock and reset the likes of She-Troll and Dagur Two Blades, Compression is a cheap card which can deny the crucial threats.

Furthermore, due to the greedy nature of this mode, any tall punishment card will obviously be strong. Don't be shy with putting cards like Geralt of Rivia or Ulfheddin into your deck, as they won't have trouble with finding their expected value. In the spoilers below, you can find a few deck ideas for each faction. We will update the guide in the near future, as we test more decks and leaders. Most importantly, we are trying to come up with something playable for Syndicate, so stay tuned.

This deck has a couple of win conditions which you can spread very comfortably across all three rounds. Similarly to most Arachas decks, you have the consume package with Slyzards, Barbegazi and some Deathwish units, while having the lucrative target in Dettlaff: Higher Vampire. She-Troll boosts herself by 2 when you consume a unit, but also at the end of the round when all Arachas Drones die and respawn due to the ruleset and AQ's leader ability. She-Troll can reach astronomically high value if left unanswered. And what's even better, you have Caranthir in this deck, allowing you to spawn another 1-health copy of She-Troll. Be careful though, as you need to have some kind of a consume engine on the board to boost her up. The combo works on Blue coin with Tactical Advantage. You can use Caranthir any Deathwish unit. It will trigger at the end of your turn.

Now we get to the spiciest part, Portal into 2x Vran Warrior. They deal 1 damage to a random enemy each time a unit dies during your turn. This of course works at the end of your turn as well, resulting in a hilarious unstoppable machine gun. Always think about the sequencing and all the possible answers your opponent could have. Vrans can easily wipe the whole board. To ensure the consistency of drawing your combo pieces, the deck runs Avallac'h, who has Frightener as the secondary target. Decree further improves consistency, often pulling a key card.

Kayran is another consume engine which can help you with utilizing Dettlaff and your Deathwish units. Glustyworp is a great win condition on its own, while also double-procing your Vrans and She-Troll. Forktails are here mostly for the mirror, but similarly to Glusty, they double-proc your Vrans and She-Troll. You can slam them when your opponent has more even-value than odd-value units and hence double-dip on the damage. Arachas Nest synergizes with each of your win cons. Artefact Compression and Spores represent very cheap control options that will always find an important target in this Seasonal mode.

Since the enemy units will be taking damage at the end of every turn, you can abuse it with An Craite Greatswords and Dagur Two Blades. We added Hemdall as the lucrative Eist target, potent counter to Arachas Queen and a good finisher. Triss: Telekinesis can pull Tremors for the wonderful synergy with GS and Dagur, Freya's Blessing to revive your engines and Dimeritium Shackles. Svalblod Priest and Heymaey Protector package is even stronger than usual due to the ruleset. Harald Houndsnout presents 6 removal as his skulls die instantly, while boosting your already developed GS or Dagur. Sigvald is a nice 2-damage-per-turn engine if you leave him alone, also making for a decent secondary Sigrdrifa's Rite target.

We included Ermion and the alchemy package, because with Ermion and Triss you have two tutors for Dimeritium Shackles and Freya's Blessing. Ermion also pulls Stribog Runestone and Sigrdrifa, usually used to revive Dagur Two Blades, GS or Sigvald. Delirum and Dimun Warships synergize with your engines, while presenting solid removal options. Royal Decree improves the consistency of the engines, control and revive cards. Artefact Compression is very useful in mirrors or versus Arachas Queen. An Craite Longship goes to 5 power immediately and when unaswered, it can generate a lot of value with GS and Dagur. If you want more tall removal at the cost of consistency, replace Decree with Geralt of Rivia.

Svalblod variation is similar to Eist, but you have 2 extra provisions. We replaced Hemdall with Vildkaarl. This frees up 3 more provisions, allowing you to upgrade Dimun Warships to Blueboy Lugos and Ulfhedinn. Longships were replaced with Drummond Shieldmaidens for some more thinning. In the light of this change, Decree and Runestone can be cut for Cerys and 1-off Drummond Queensguard.

Thanks to these changes, you have a much stronger presence in Rounds 1 and 2. Sigrdrifa has two more nice targets in Champion of Svalblod and Blueboy Lugos, who represents another 2-point-per-turn engine and has a high removal ceiling with Svalblod. Your leader charges are often used to align your units accordingly, while buffing Heymaey Protectors.

Scoia'tael is happy to play a basic Harmony deck with Artefact Compression for some extra control. We replaced Barnabas with Ciaran while ugprading some bronze cards. Elven Swordmasters and Dol Blathanna Archers are particularly wonderful against Arachas Queen, but can also double-dip on their damage by dropping even-value units down to odd-value. Pavko and Saskia are too good to ignore, despite the fact that they drop down to 4 power. You can always use your Call of the Forest or Tactical advantage to keep them healthy. Similarly to most Scoia'tael decks on the ladder, this one runs the poison package which consists of 2x Dryad Ranger and Weeping Willow. The Harmony tag is what truly makes these cards good. They act as both tall removal and engines.

You've got a fair mix of the three primary categories in Elves, Dwarfs and Dryads. The deck plays two Treants, two Humans and a Dragon, which results in a lot of Harmony triggers. While this deck can focus on ramping up with Harmony tags thanks to Water of Brokilon, using Francesca on Novigradian Justice is also very powerful thanks to Mahakam Defender. The Seasonal rules are applied before the passive abilities of your cards and since Defenders have even power, they get boosted twice at the end of each turn. Such a tremendous engine will of course outvalue Dryad Fledglings and can often be used as your primary win condition.

Call of the Forest improves the consistency of the Poison package and can always fetch The Great Oak or one of the damage engines. When you add Morenn and Ciaran to the mix, you have just enough control to shut down the crucial threats. Mahakam Marauder is your secondary Justice targets and Dwarven Skirmishers are actually invaluable when it comes to meeting removal breakpoints. It's worth mentioning that if you're looking to finish your Dana mastery, she can certainly play a deck very similar deck to this one.

Keeping your units at even-value to make use of the rule makes a boost-oriented Meve deck a good idea. You have Inspired engines in Black Rayla, Anna Strenger and Reinforced Trebuchet. Keira, Temerian Drummer and Cintrian Enchantress can make your Tridam Infantry go absolute nuts. Keep the units next to Anna or Drummer at even-value and they will get boosted by 2 at the end of each round. The deck plays Bloody Baron, Prince Anséis, Margarita and Artefact Compression for some control tools. Triss: Telekinesis into Shackles or Tremors is always great. You can use Runeword for engine protection as well. Botchling with a Meve buff immediately grows to 7 power and will thus stick for the remainder of the round.

Vissegerd isn't only amazing against Arachas Queen, but also a very threatening finisher on his own, even if the round isn't long. Queen Adalia can as per usual create another engine, allowing you to overwhelm the opponent. Dun Banners help you with thinning the deck. Prince Stennis can serve as engine protection like Runeword, or help with empowering Vissegerd. If you don't see too much Arachas Queen, you can replace Botchling and Stennis with Nathaniel Pastodi and Nenneke. A few other cards you could play in this deck are Vigo's Muzzle, Falibor and Dandelion: Poet. You can even throw in Portal, but then you would have to replace 2x Enchantress with 2x Kaedweni Sergeant.

Let's start off with saying that while Usurper is the best leader choice because he naturally counters Arachas Queen and other leader-dependent decks, this deck can definitely be played with every Nilfgaard leader. Your strongest condition is Portal, which pulls 2x Nauzicaa Sergeant. This deck can double-dip on the boosts with cards like Artorious, Roderick, Imperial Diplomacy and Duchess's Informant. Since Portal is your most powerful play, save it for Round 3 or use it in Round 2 if you feel like you need to bleed your opponent.

The other win condition is Hefty Helge with 10 tactic cards. It should ideally be used to win Round 1. However, not drawing your Helge isn't a problem. You can rely on the Assimilate engines with Create cards. Shackles were replaced with 2x Assassination because of Hefty Helge. Tourney Joust might seem a bit weak, but it can actually kill 5 power units (looking at you, Vran Warrior). Cards like Bribery, Imperial Diplomacy and Dazhbog Runestone synergize with all of your engines. Marching Orders will usually pull Duchess's Informant, who boosts your engines, while creating another engine or a Deploy card. Furthermore, being at 1 power, they die at the end of the opponents' turn, which enables Experimental Remedy.

Triss: Telekinesis can fetch removal or a Create card and is a Mage, empowering your Fringilla. Leo Bonhart is simply a necessary answer, as one enemy unit will always grow tall. Menno is a must-have in decks with a high amount of tactics. Artorius Vigo should be used to Create Duchess's Informant. Imperial Diviners can sometimes be used to Purify a lock, however if you have a lot of Create cards in your hand, just drop her on an empty board, as she will get boosted to 5 power.