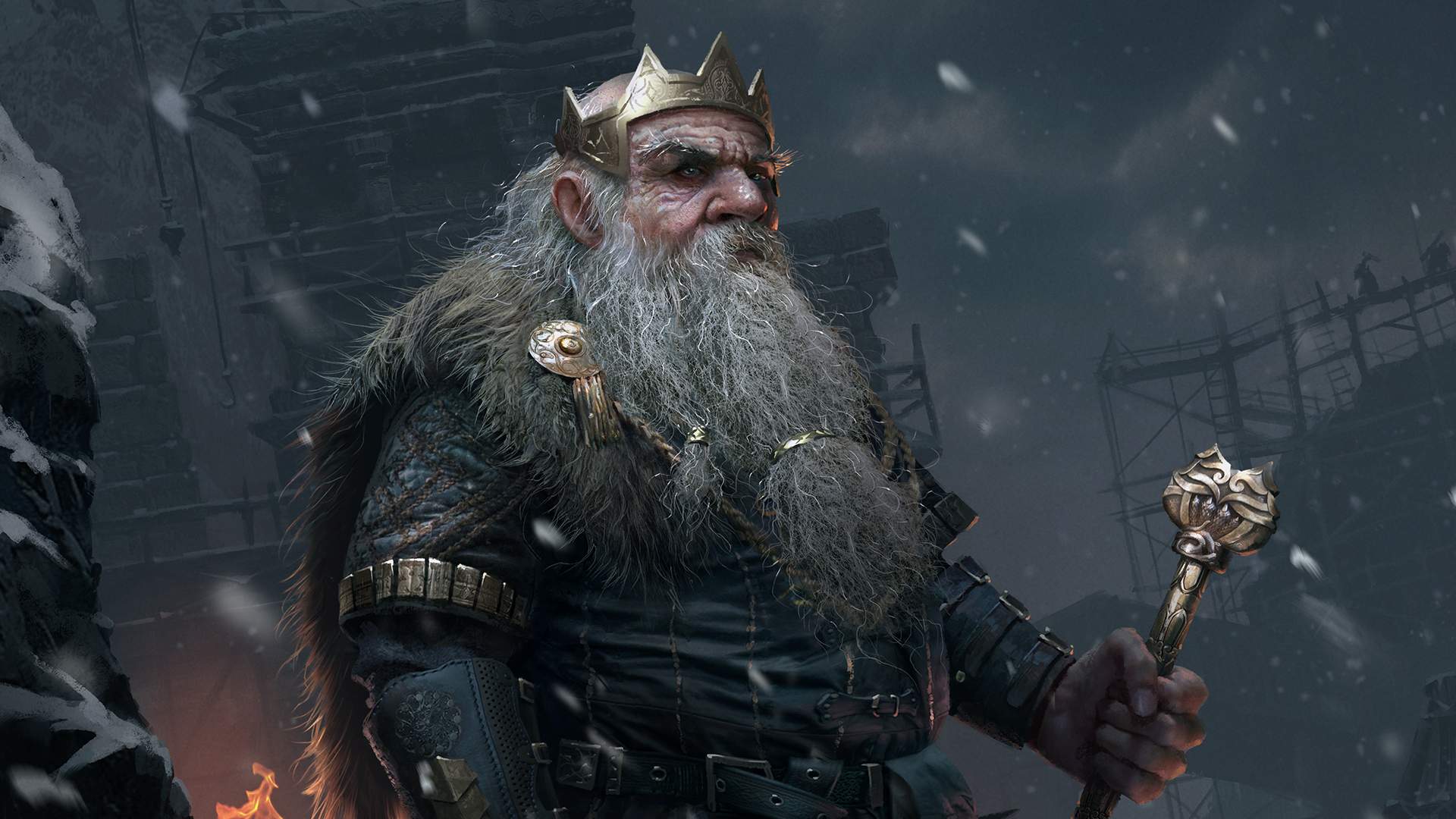 Hey guys, Spyro here, bringing you a deck guide for Brouver Hoog. Since the recent nerfs to Eithné, Brouver once again became one of the most powerful leaders within the faction. As a 6 point leader with strong synergies, he can grant you 12+ value when played correctly. This deck is very flexible and one of the few decks in the game that is able to play for carry-over, making it extremely threatening on red coin. However, you're almost always going to lose Round 1. The trick lies in establishing your thinning while getting carry-over without going a card down in most cases. Let me explain how!

Great in long rounds with Oak, decent in shorter rounds with Sheldon and Brigade
You benefit from red coin more than other decks, it allows you to abuse carry-over

You can have a very hard time on blue coin, as a lot of your cards are low tempo
Unfavoured against Skellige

Round 1 is relatively straightforward. If you win the coinflip, set up your carry-over with Dwarven Agitators and Ithlinne. You should do as much thinning as possible before passing. Against Calveit that could possibly be playing Soldier swarm, consider committing and winning Round 1, then bleeding in Round 2.

When you lose the coinflip, you probably don't want to play too slowly, as Sweers or another high tempo play with Roach from your opponent could force you to lose on even cards. In that case, you can avoid playing Agitators and instead play Ithlinne and your thinning tools. That being said, playing an Agitator is alright, but you then may have to invest a higher value card such as Milaen or Barnabas to avoid losing on even cards.

Your opponent might try to bleed you. You can commit Milva and start playing for card advantage. Try to establish more carry-over with handbuff cards. Be careful and don't buff Sheldon too high in case of Shilard.

You don't need a big Sheldon in this matchup, as NG doesn't usually play very tall. So a 7 point Sheldon is good enough, leaving The Great Oak to take the hit from Shilard. Don't play Gabor until after your opponent passes. It's very easy for Nilfgaard to Muzzle him or kill him with Serrit.

If your opponent dry passes, you simply play Gabor and any other carry-over cards until you reach 7 cards in your hand.

Depending what you have left, you can sometimes play around Leo. Your preferred Sword targets are Sweers, Vivienne or even Leo. While you have to squeeze in as much Oak value as possible, keep in mind that NG usually plays Lacerate.

You should try to avoid playing any high value removal cards or locks when you win the coinflip. They are very important in Round 3. Establish your carry-over and thinning. Stay in the round as long as possible. Never commit your resources.

On blue coin it can be tricky, you may need to commit some removal to avoid losing on even. If your opponent commits valuable cards such as Portal and Queen Adalia, you have to accept losing on even and play for carry-over and thinning.

Learn to determine when you can try to defend your card advantage and when you have to accept losing on even cards. Being able to adjust to the correct game plan is crucial in this matchup.

Your opponent will generally dry pass. If they push, you should start off with Milva and play for card advantage. Don't be afraid to fully commit into the round, because if they fail the 2-0 attempt, you're favoured in the short Round 3 to come.

It's okay to use some leader charges if you need to in order to get card advantage. When they dry pass, you simply play carry-over cards until you reach 7 cards left in hand. If you won Round 1 (although you very likely won't in most cases) you can consider bleeding in Round 2, if your hand is good enough for it.

You should use your leader charges to deny engines. Consider playing Vrihedd Brigade early into the round to potentially snipe off some engines. Brouver is practical against row-locked engines such as Reinforced Trebuchet or Aretuza Adept.

They often play Sabrina, so be careful with your row-stack. Play Oak earlier to kill an engine, but keep Vincent in mind. Your best Sheldon is most likely going to be the card they pull with their leader. Try to kill as many engines as possible.

On red coin, establish your carry-over and thinning as usual. Try to look for a pass on 7 cards. If you lose the coinflip, this matchup becomes very difficult. You should prioritize thinning over carry-over. Playing low tempo carry-over cards could make you lose on even cards.

You are very likely going to lose on even if your opponent draws well and commits their resources. Don't chase card advantage while wasting your valuable cards if you suspect you will lose on even. You can always pass with 5 cards.

Your goal is to survive the bleed by any means necessary. It's unlikely that you will get card advantage, but sometimes you might be able to if your opponent pushes too far. Play Milva or any engines early, but make sure she doesn't die to Marauder or Houndsnout. Keep your locks for Olaf and Svalblod Priest.

You play whatever you have left and hope that you have more points than your opponent. If they have yet to play Olaf or Priest, save your locks for those. Your best Sword targets in this matchup are mostly going to be Hjalmar and Skjall. Harald Houndsnout is also a great target, especially against Harald The Cripple's leader ability.

Your strategy is almost the same as vs Harald/Svalblod/Arnjolf with the exception that engines are really bad vs Crach. Thus, you should try to mulligan Dryad Fledglings. Otherwise refer to the previous matchup guide.

If your opponent tries to bleed, you can very often get card advantage. Again, be careful with Milva. Play her as soon as she doesn't die to Marauder and Houndsnout. It's better to save Gabor for his immunity in Round 3. The immunity value is worth more than the carry-over, due to how punishing non-interactive units can be against Crach.

Develop your immune cards earlier into the round, as Crach eventually runs out of proactive plays. Play around Vabjorn by placing Great Oak in a position where it gets boosted a bit so it can't get pinged into Vabjorn range. Your ideal Sword targets are Hjalmar, Houndsnout, Skjall and Wiley. Ida can be game-deciding Summoning Circle.

On red coin, just get your carry-over and thinning established as per usual. You should then look to get out of the round. In ST mirrors, you prefer losing Round 1, as you will be able to play Gabor in Round 2 for carry-over.

On blue coin, consider using Tactical Advantage to boost up Dwarven Agitator to play around Sentinels. This can be risky because of Cleaver, so proceed with caution. You can use your own Sentinels to kill your opponents Agitators in order to possibly deny their thinning. It can cause them to brick and hand quality is often the deciding factor in mirror matchups.

Play your carry-over cards until you get to 7 cards. If you won Round 1, preserve Gabor for Round 3.

You can snipe off your opponent's Milva with Vrihedd Brigade and leader charges if they were foolish enough to play her too early. Don't make that mistake yourself. Otherwise, Round 3 is pretty straightforward and whoever drew better wins. Your Sword targets are usually Ithlinne, Milaen and Barnabas.

On red coin, play for carry-over and thinning. Similarly to the Henselt matchup, you shouldn't waste your removal here. When you lose the coinflip, you will need to lock or kill Barbegazi and Slyzard in order to not lose on even cards. You can commit into Round 1 if your hand is good enough to win the round, as you then have the option to bleed your opponent.

If you won Round 1 and suspect Yennefer, it's often correct to bleed them in Round 2. Yennefer decks run some unusual non-interactive cards such as Impenetrable Fog or Thunderbolt Potion, that's your indicator. Otherwise you can dry pass the classic consume version and try to defeat them in a long Round 3.

Generally, you can consider bleeding when your hand has enough ways of dealing with the consume engines. As soon as something that can eat Dettlaff sticks to the board, or if they play Dettlaff and you can't deal with it, you need to pass or you will go a card down almost guaranteed.

If they win Round 1 and bleed you, you have to answer their consume engines. Should they choose to dry pass instead, play your carry-over until you reach 7 cards.

Your Round 3 strategy is pretty much the same as in Round 2. Feel free to make Sheldon as big as possible, they usually don't have tall punish and always go very tall with Kayran and Glustyworp. Keep Ida for Summoning Circle if you haven't seen it yet, otherwise use her on Frightener.

Use your leader ability to boost 1 power units on your side of the board to deny Glustyworp. Brouver can also help you with finishing off any leftover consume engines they try to play. Your Sword target in this matchup is dmg/boost Crone. Spyro is a 24-year-old South African who started with Gwent at the beginning of Closed Beta. Since then he quickly grew as a player and found his place in Top 100 of the Ranked Ladder. He recently started streaming and creating youtube content. Spyro is constantly looking for new ways to improve. His ultimate goal is to eventually reach the very top of the Pro Ladder.